For months, Zhao Faqi was a folk hero for entrepreneurs in China — an investor who fought the government in court and online, and against the odds, seemed poised to win. He accused officials of stealing his rights to coal-rich land, and ignited a furor by accusing China’s most powerful judge of corruption.

Now, Mr. Zhao has dropped out of sight — and the authorities want to erase his story.

For much of the winter, Mr. Zhao’s case was the subject of avid discussion on Chinese social media, and his supporters saw it as a test of whether the president and Communist Party leader, Xi Jinping, would support the troubled private sector against grasping officials.

Now, as the Communist Party-controlled legislature gathers for its annual meeting in Beijing, it seems the authorities have decided that investors like Mr. Zhao spell trouble.

The state news media has painted him as a cunning schemer. A judge who supported his case was paraded on television. A crusading former talk show host who helped bring the case to light has fallen silent.

Mr. Zhao’s arc from self-declared victim to officially designated villain has been dramatic even for China, where the party controls the courts and businesspeople can abruptly fall from grace. Mr. Zhao’s descent — and possible disappearance — is a demonstration of the hazards that entrepreneurs face in taking on powerful Chinese officials.

“I’ve faced a lot of risks and pressure because of this lawsuit,” Mr. Zhao said in an interview in Beijing a few weeks before he disappeared. Chinese entrepreneurs, he said, yearned for the rule of law to replace arbitrary power. “You can’t say someone is protected one day, and take away protection the next day.”

Mr. Zhao drew support from liberal economists and lawyers who have been unsettled by Mr. Xi’s reverence for communist tradition and support for state-owned companies, which he has urged to grow “stronger, better and bigger.” 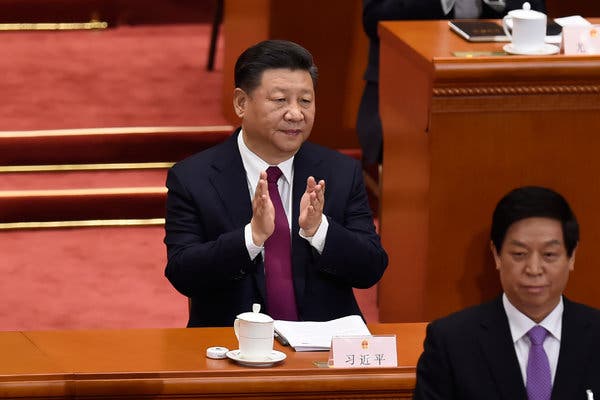 The gloom prompted Mr. Xi to publicly reassure the private sector at least three times in a month that the leadership remained committed to its success. In early November, he also took the rare step of admitting that the government had gone too far.

“It should be acknowledged that the private sector is experiencing difficulties that are real, and even quite severe,” Mr. Xi said at a meeting with more than 50 selected businesspeople. “Private businesses and businesspeople are one of us.”

Such reassurances may now mean little to Mr. Zhao.

A former soldier, Mr. Zhao went into business after quitting his job for a supplies company in 1991. He made his fortune as a construction contractor and later plowed his earnings into the mining investment.

Mr. Zhao, 52, was among the entrepreneurs who plunged into business after Deng Xiaoping, then China’s paramount leader, unleashed market overhauls. At the time, Mr. Zhao said, entrepreneurs were like famished goats set free from a pen and allowed to flourish.

“But we’re seeing this vitality steadily shrink,” he said.

Since 2005, he has been fighting for the right to explore more than 100 square miles of sandy, scrub-covered land on the fringe of Yulin, a coal-rich city in Shaanxi Province. After initial surveys indicated that the land was abundant in coal, the mining institute that had sold an 80 percent share of exploration rights to Mr. Zhao’s company canceled the contract, citing government orders.

Mr. Zhao waged a legal fight that took him all the way to China’s top court, the Supreme People’s Court.

His chances of victory seemed slim. In China, judges answer to the party. While courts have greater autonomy than before in business disputes, they often rule in favor of officials and their allies.

But officials made no effort to enforce the ruling.

Cui Yongyuan, a former Chinese television talk show host with a massive internet following, took up Mr. Zhao’s cause, fueling an uproar in the Chinese news media, which was largely sympathetic.

Mr. Cui said that files from the case had vanished from the Supreme People’s Court. He also revealed that a disgruntled judge on the court, Wang Linqing, claimed that China’s top judge, Zhou Qiang, tried to ensure that judges did not rule in Mr. Zhao’s favor.

Mr. Cui shared excerpts from interviews with Judge Wang on Sina Weibo, a social media service where he has nearly 20 million followers. The judge anxiously described how files from Mr. Zhao’s case had vanished from his office.

“This is something that I never imagined would happen,” Judge Wang said in one of the excerpts.

When the Supreme People’s Court acknowledged a problem and party investigators opened a high-level inquiry, Mr. Zhao was cautiously hopeful.

“It’s progress toward the rule of law,” Mr. Zhao said in an interview at the time. “But the outcome is unclear.”

Mr. Zhao was right to be cautious. Earlier this month, the government released the findings from the investigation, and they were damning for him and his supporters.

The investigators said that Judge Wang himself had spirited away the missing case files. A report aired on official Chinese television showed him confessing that he had nursed grudges against more senior judges and tried to take revenge by stealing the files to create an embarrassing scandal.

“I offer my heartfelt apologies to the many internet users” who followed the case, Judge Wang said. “My behavior amounted to swindling their well-meaning hearts.”

Supporters said that they were worried that Mr. Zhao and Judge Wang’s real offense was rocking the political boat. They were especially shocked that Judge Wang was shown on television avowing himself guilty of breaking the law even before a formal investigation by the police, joining the ranks of dissidents and rights lawyers who have been forced to record scripted confessions while in detention.

“The official reports are full of problems, and the biggest one is how Judge Wang Linqing was made to confess on television,” said Sheng Hong, executive director of the Unirule Institute of Economics, a think tank in Beijing that backs market liberalization and previously held a forum about Mr. Zhao’s case.

Since the findings were released, Mr. Zhao’s phone has been turned off, and he appears to have gone into hiding or official custody. Judge Wang faces a criminal investigation and a likely prison sentence.

The supreme court, Ministry of Public Security and other government offices did not answer questions about whether Mr. Zhao was detained, and his family could not be reached. Zhou Qiang, the top judge whom Mr. Zhao accused of corruption, has attended the legislative meeting in Beijing, apparently unshaken by the accusations.

Still, Chinese lawyers have said online that the findings in the official report defied logic. Was it believable, they asked, that Judge Wang turned on his superiors because he did not want to do overtime one night, as the report had claimed? It also failed to address in detail Judge Wang’s claims of being repeatedly intimidated by senior judges, critics said online.

“From the viewpoint of common sense, many things about this are just hard to swallow,” said Liu Xiaoyuan, a human rights lawyer. “But it’s also shocking to think that a high-level investigation like this would just make all this up.”

corruption editor - 20/04/2017
0
A highly anticipated interview in which a wanted tycoon said Chinese law enforcement authorities were harassing him and his family as part of a...

Taiwan is not part of China, says Pompeo

taiwan editor - 13/11/2020
0
Speaking in an interview on Thursday, U.S. Secretary of State Michael Pompeo said: “Taiwan has not been a part of China. That was recognized...

chinese movie editor - 02/08/2018
0
Chinese social media users are questioning the whereabouts of one of China's biggest film stars. Fan Bingbing is one of the world's highest paid actors, but...

Why China is Seeing a Huge Increase in Breast Cancer Rates

Society editor - 12/10/2017
0
Breast cancer is the most common cancer among women in China, according to the latest data from China’s national cancer registry. An analysis of...

taiwan editor - 30/08/2020
0
Against Beijing's strong objections, an official delegation from the Czech Republic, headed by Senate President Miloš Vystrčil, arrived in Taiwan Sunday on a six-day...

In the midst of Zimbabwe’s crisis, China’s influence comes under scrutiny

World editor - 17/11/2017
0
As Xi Jinping visited Zimbabwe during a tour of Africa in 2015, Robert Mugabe offered the Chinese president a warm welcome and portrayed the two...

Lifestyle editor - 11/06/2017
1
Apple has a tip for China—all online tips must go through Apple before they go anywhere else. This past week the hardware giant unveiled two...

Religion editor - 12/03/2019
0
Beijing (AP) - China is defending its often-criticized rule in Tibet 60 years after the Dalai Lama fled into exile amid an abortive uprising...

News editor - 05/08/2021
0
A report by U.S. Republican lawmakers says a "preponderance of evidence" proves the virus that caused the COVID-19 pandemic leaked from a Chinese research...

World editor - 19/02/2017
0
A United States aircraft carrier strike group has begun patrols in the South China Sea amid growing tension with Beijing over control of the...

World editor - 14/08/2017
0
China announced Monday it will cut off imports of North Korean coal, iron ore and other goods in three weeks under U.N. sanctions imposed...