Trump has said he wants to raise concerns about China’s trade practices and press Xi to do more to rein in North Korea’s nuclear ambitions during his two-day visit to the Spanish-style Mar-a-Lago resort in Palm Beach, Florida, though no major deals on either issue are expected.

The two sides should promote the “healthy development of bilateral trade and investment” and advance talks on a bilateral investment agreement, Xi said, according to a statement on China’s Foreign Ministry website.

Xi and his wife, Peng Liyuan, joined Trump and his wife, Melania, at a long table in an ornate candle-lit private dining room festooned with red and yellow floral centerpieces, where they dined on pan-seared Dover sole and New York strip steak.

Trump, a New York real estate magnate before he ran for office, joked before dinner: “We’ve had a long discussion already, and so far I have gotten nothing, absolutely nothing. But we have developed a friendship – I can see that – and I think long term we are going to have a very, very great relationship and I look very much forward to it.”

The fanfare over the summit on Thursday was overshadowed by another pressing foreign policy issue: the U.S. response to a deadly poison gas attack in Syria. As Trump and Xi were wrapping up dinner, U.S. forces fired dozens of cruise missiles at a Syrian airbase from which it said the chemical weapons attack was launched this week, an escalation of the U.S. military role in Syria that swiftly drew sharp criticism from Russia.

In Beijing, China’s Foreign Ministry urged all parties in Syria to find a political settlement.

Trump and Xi were expected to get into more detailed discussions about trade and foreign policy issues on Friday, concluding their summit with a working lunch.

Trump promised during the 2016 presidential campaign to stop what he called the theft of American jobs by China and rebuild the country’s manufacturing base. Many blue-collar workers helped propel him to his unexpected election victory in November and Trump wants to deliver for them.

“We have been treated unfairly and have made terrible trade deals with China for many, many years. That’s one of the things we are going to be talking about,” Trump told reporters ahead of the meeting. 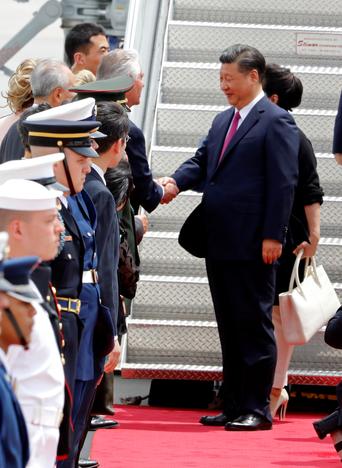 Trump is still finding his footing in the White House and has yet to spell out a strategy for what his advisers called a trade relationship based on “the principle of reciprocity.”

“Even as we share a desire to work together, the United States does recognize the challenges China can present to American interests,” said Secretary of State Rex Tillerson, also in Florida for the meeting.

Trump’s daughter, Ivanka, and her husband, Jared Kushner, who both work at the White House, also were among the dinner guests.

The summit brings together two leaders who could not seem more different: the often stormy Trump, prone to angry tweets, and Xi, outwardly calm, measured and tightly scripted, with no known social media presence.

What worries the protocol-conscious Chinese more than policy clashes is the risk that the unpredictable Trump could publicly embarrass Xi, after several foreign leaders experienced awkward moments with the new U.S. president.

“Ensuring President Xi does not lose face is a top priority for China,” a Chinese official said.

The most urgent problem facing Trump and Xi is how to persuade nuclear-armed North Korea to halt unpredictable behavior like missile test launches that have heightened tensions in South Korea and Japan.

North Korea is working to develop an intercontinental ballistic missile capable of hitting the United States.

Trump has threatened to use trade to try to force China to exert influence over Pyongyang.

“I think China will be stepping up,” Trump told reporters on Thursday. Beijing says its influence is limited and that it is doing all it can.

The White House is reviewing options to pressure Pyongyang economically and militarily, including “secondary sanctions” against Chinese banks and firms that do the most business with Pyongyang.

A long-standing option of pre-emptive strikes remains on the table, but despite the tougher recent U.S. talk, the internal review “de-emphasizes direct military action,” the U.S. official said, speaking on condition of anonymity.

Analysts believe any military action would likely provoke severe North Korean retaliation and massive casualties in South Korea and Japan and among U.S. troops stationed there.

NO GRAND BARGAIN ON TRADE

On trade, U.S. labor leaders say Trump needs to take a direct, unambiguous tone in his talks with Xi.

“President Trump needs to come away from the meeting with concrete deliverables that will restore production and employment here in the U.S. in those sectors that have been ravaged by China’s predatory and protectionist practices,” said Holly Hart, legislative director for the United Steelworkers union.

A U.S. administration official told Reuters that Washington expects to have to use legal tools to fight for U.S. companies, such as pursuing World Trade Organization lawsuits.

“I don’t expect a grand bargain on trade. I think what you are going to see is that the president makes very clear to Xi and publicly what we expect on trade,” a U.S. official told Reuters, speaking on condition of anonymity.

Trump has often complained Beijing undervalues its currency to boost trade, but his administration looks unlikely to formally label China a currency manipulator in the near term – a designation that could come with penalties.

Society editor - 27/01/2017
2
By Muyu Xu and Ryan Woo | BEIJING As millions in China head home to celebrate the Lunar New Year holiday with their families, 24-year-old...

Money editor - 05/02/2018
0
China will reportedly block anyone in the country from accessing websites that offer cryptocurrency trading services or initial coin offerings (ICOs). Advertisements relating to...

Politics editor - 14/08/2017
0
In today’s HW, we wonder about the future of a once-favoured China centre and confront the supposed similarity between universities and leeches. Interesting times Kevin Rudd’s political...

World editor - 28/12/2017
0
President Donald Trump said Thursday he is "very disappointed" following a report that China may have run afoul of international sanctions by providing oil to North...

Russia and China Hold Hands Ahead of G-20 Summit

World editor - 04/07/2017
0
Visiting dignitaries from Russia and China may face crowds of rowdy demonstrators at the G-20 summit that begins on Thursday in Hamburg, leading the...

Guo Wengui editor - 29/11/2020
0
In this US Presidential election, all the forces behind the scenes - They are all standing with the CCP, why? The reason very simple, they...

We must have a clear mind of this CCP virus

Business editor - 13/08/2018
0
Malaysia's prime minister said Monday he will seek to cancel multibillion-dollar Chinese-backed infrastructure projects that were signed by his predecessor as his government works...

Business editor - 13/04/2017
0
President Donald Trump said he won’t brand China a currency manipulator, retreating from a core campaign promise, though he argued that a strong dollar...

Business editor - 18/05/2017
0
Ivanka Trump’s apparel brand is facing criticism from a labor-rights group for relying on Chinese factories that it says force some employees to work...

Military editor - 23/08/2019
0
I believe the Chinese Communist Party, the CCP, is a terrorist organization. I think it terrorizes the Chinese people. I think the only reason...

Business editor - 21/06/2017
0
A Chinese bike-sharing company has gone out of business after 90% of its bikes went missing in the first five months. Chongqing-based Wukong Bikes said...

TO THOSE WHO DON’T GET IT! – This Is The War Of All Wars.

US china editor - 11/01/2021
0
Now you understand why there was never any action against the Clintons or Obamas, how they destroyed emails and evidence and phones and servers…how...

chinese communist party editor - 13/08/2020
0
China’s domestic politics has witnessed important developments in recent weeks. There has been a pronounced attempt to bolster President Xi Jinping’s status within the...

News editor - 20/03/2019
0
Trump says China tariffs could stay in place for a 'substantial period of time' as trade deal develops Q    On the China trade deal, once...