China tops the world for the longest land border. It may also boast a lead in the number of problems caused by a single border. China’s quest for national security, then its expansion, over seven decades of Communist leadership have landed it on real battlefields as well as political ones with most of the 14 states that adjoin its land mass. It’s got one really good friend, too.

Some countries that share part of China’s 22,117-kilometer-long land border have fought over that dividing line. Not every border dispute is about the demarcation line itself. It might have more to do with resource extraction, trade or exported labor but cropped up because the two parties sit next to each other.

Laotians, for example, are starting to chafe at China’s railway line through their country because of land degradation and the specter of giving related jobs to Chinese workers instead of locals.

This dispute matters because it keeps raging and both players are big, with the West tacitly backing India. Troops from India and China are locked now in a standoff in Bhutan over a highway that Chinese crews thought was okay to build in a plateau called Doklam. Troops from each side are poised to strike if needed but the problem that erupted in June has led so far to fighting by words rather than action. 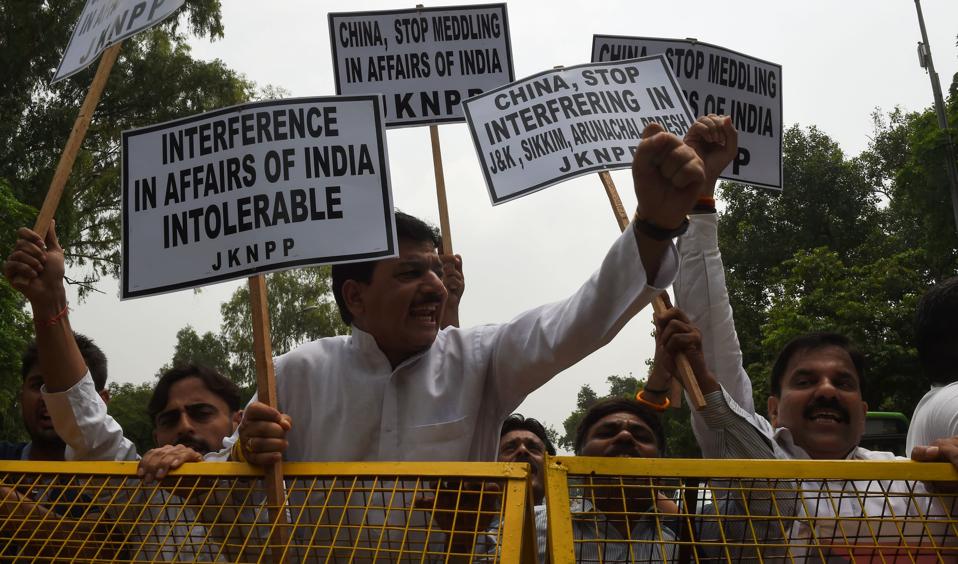 Indian activists of Natinal Panthers Party shout anti Chinese slogans during a protest near the Chinese embassy in New Delhi on July 7, 2017. China has warned that the withdrawal of Indian troops from disputed territory was a precondition for peace as tensions rise in a border row between the two Asian powers that has drawn in tiny Bhutan. (MONEY SHARMA/AFP/Getty Images)

India and China separately dispute two other tracts of land. China controls one, Aksai Chin, and India the other, Arunachal Pradesh. The two Asian giants battled for a month in 1962 but signed a peace deal in 1993 to head off more violence.

But China wants to prove something this time, some analysts think.

Read more: Neither Side Is Likely To Back Down From China-India Border Standoff

“A limited conflict could set India’s economic development back by a decade or two and further widen power asymmetry between the two countries,” says Mohan Malik, professor at the Asia-Pacific Center for Security Studies in Honolulu. In that case, he says, “Beijing will have then achieved its objective of neutralizing any challenge to Chinese supremacy in Asia.”

Stable Sino-Russian ties have wavered little over the past 25 years, but fighting before was grim enough to etch a memory for both powers. The former Soviet Union battled China in 1969 over a stretch of their border east of Mongolia when the People’s Liberation Army reached Zhenbao Island in a river dividing the two sides. The USSR fought back and casualties shot up over two weeks of clashes to at least 59. Troops met again on their western border later that year and the death count increased. Political ties between the two countries had reached a low point a year earlier as Soviet forces were already gathering along the border.

The two patched things over only with the signing of the Sino-Soviet Border Agreement in 1991, averting any nuclear war. China got Zhenbao Island.

China and Vietnam had jousted over their border, now 1,281 kilometers long, for centuries during dynastic times. They really haven’t stopped.

In 1979 China invaded Vietnam’s northernmost provinces, the start of a 27-day war that killed tens of thousands, according to this report in The National Interest. 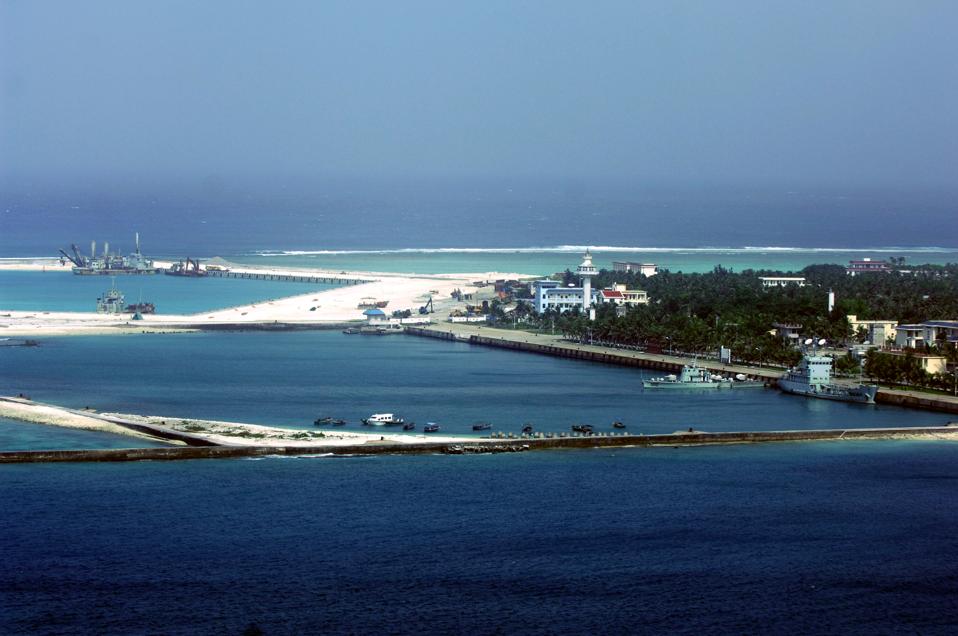 Aerial view of the city of Sansha on an island in the disputed Paracel chain in July 2012. (STR/AFP/Getty Images)

They made up in 1990, but Chinese and Vietnamese vessels also had clashed over the tiny Paracel Islands in 1974 and over a reef in the Spratly Islands in 1988. Vietnamese combatants died and China took control of both. Vietnam still covets the Paracels, a centerpiece in their broader South China Sea sovereignty dispute that touched off anti-Beijing riots in 2014 with the arrival of a Chinese oil rig. Nationalism smolders on both sides.

Over the past month, the two sides have sparred over Vietnam’s plan to explore for gas and oil in part of the sea that Beijing claims, chilling dialogue that picked up in July 2016 after a world arbitration court said China lacked a legal basis for much of its maritime sovereignty claim.

So who’s the friend? China’s border ties with North Korea get an honorable mention, but Western pressure on North Korea forces China to keep a wary eye on that demarcation. Sometimes it props up North Korea so it can buffer Beijing against the West. 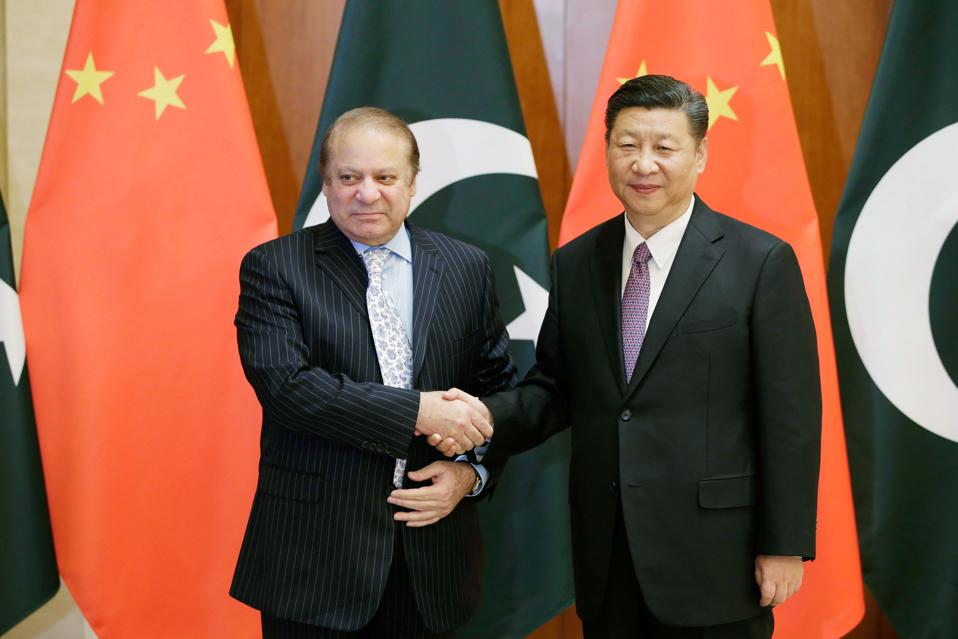 Pakistan’s Prime Minister Nawaz Sharif (left) with China’s President Xi Jinping, ahead of the Belt and Road Forum, in Beijing on May 13, 2017. (JASON LEE/AFP/Getty Images)

The better friend is Pakistan, co-host of a 523-kilometer-long mountainous border with China. The pair got off to a high start in 1963, after China’s border war with India, when they set a border by ceding land to each other. The friendship has weathered geopolitical changes over seven decades and gives each side support from the other in resisting India, a common threat.

For starters, India doesn’t recognize the Sino-Pakistani border because it claims some of the land involved. Pakistan plays a subservient role to China as needed — something other states would rather not — to get economic and military aid (China is the top supplier) that’s useful again in keeping India away.

World editor - 13/04/2017
0
Foreign journalists visiting North Korea have been told to prepare for a "big and important event" on Thursday, although there were no indications it...

World editor - 25/05/2020
0
In less than 24 hours, Sky News Australia has a series of interview videos out on Youtube, bringing up the question of Victoria State's...

Lifestyle editor - 07/10/2019
0
Donald J. Trump‏Verified account @realDonaldTrump 17h17 hours ago It is INCREDIBLE to watch and read the Fake News and how they pull out all stops to...

Politics editor - 19/08/2017
0
The world’s oldest publishing house, Cambridge University Press, has been accused of being an accomplice to the Communist party’s bid to whitewash Chinese history...

Guo Wengui editor - 24/07/2017
0
As questions mount over who exactly owns the Chinese conglomerates that are now heavily invested in the U.S. and Europe, the mammoth HNA Group...

Politics editor - 04/11/2019
0
There is a rumor of the Deputy Party Secretary of Chongqing Ren Xuefeng fell off from a building in the Jingxi hotel during the...

World editor - 22/09/2017
0
Attorney General George Brandis is planning a once-in-a-generation shake-up of the legal framework governing who can lawfully influence Australian politicians, amid fears of clandestine...

Money editor - 01/04/2017
0
LeEco’s effort to buy the largest television manufacturer in the U.S. has stalled, as tighter currency controls in China put the $2 billion deal...

China Ban on ICO is Temporary, Licensing to be Introduced: Official

Money editor - 11/09/2017
0
During an interview with state-owned national television network CCTV-13, Hu Bing, a researcher at the Institute of Finance and Banking, a Chinese government-supported academic research organization,...