Chinese President Xi Jinping has arrived in Florida for a high-stakes summit with US President Donald Trump.

His plane landed at West Palm Beach where he was greeted by Secretary of State Rex Tillerson.

The heads of the world’s two biggest economies will hold the bilateral at Mr Trump’s Mar-a-Lago retreat.

The American leader is expected to press his counterpart for action on North Korea, and Mr Xi to seek assurances on Taiwan.

Mr Trump tweeted last week that the summit “will be a very difficult one”.

Some protesters lined the streets to voice their opposition to China’s policy in the South China Sea.

Mr Xi and his wife, folk singer Peng Liyuan, will attend a welcome banquet at the Mar-a-Lago estate on Thursday evening with the US president and first lady, Melania Trump.

The bilateral will conclude with a working lunch on Friday.

An A-Z of big issues in tense US-China summit

Is Trump wise to take on China over trade?

But there is unlikely to be any golf. While Mr Trump is fond of hitting the fairway, Mr Xi’s administration has cracked down on the sport in an anti-corruption drive.

All eyes will be on body language between the two leaders – one a softly spoken Communist Party apparatchik and the other a brash Manhattan property tycoon. 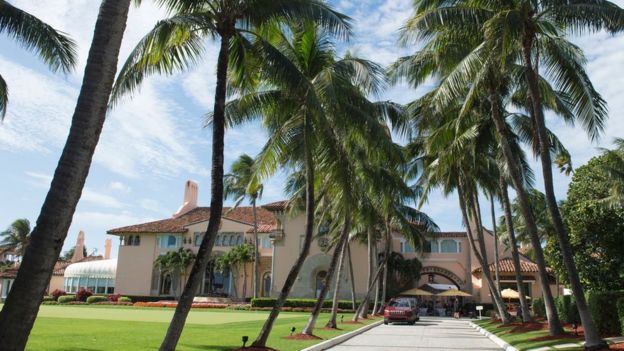 The Chinese are reportedly wary that the mercurial US president could embarrass Mr Xi, who faces a party congress in November, by some breach of protocol.

“Ensuring President Xi does not lose face is a top priority for China,” one Chinese official told Reuters news agency.

The Republican president’s blue-collar supporters will hope he can translate his China-bashing election rhetoric into concrete gains for American manufacturing workers.

Despite his tough campaign talk, Mr Trump has so far not followed through on his threat to formally brand China a “currency manipulator”, or to hit Chinese imports with punitive tariffs.

Mr Trump tweeted last week that the US could no longer tolerate massive trade deficits and job losses.

One of the most urgent issues for the US is nuclear-armed North Korea, which fired a missile into the Sea of Japan on Wednesday.

Pyongyang is trying to develop an intercontinental ballistic missile capable of hitting the west coast of the US.

Mr Trump is expected to call on Mr Xi to arm-twist North Korea into halting its nuclear programme by denying it access to banking institutions.

The US president told the Financial Times this week he was prepared to act unilaterally.

“If China is not going to solve North Korea, we will,” he said.

A senior White House official said Pyongyang would be a key test for the Trump-Xi relationship.

“The clock is very, very quickly running out,” the official said. “All options are on the table for us.”

Although Beijing has condemned the missile tests, it has been reluctant to isolate its neighbour, fearing its collapse could spawn a refugee crisis and leave the American military camped on its doorstep.

For his part, Mr Xi will seek assurances from Mr Trump on US arms sales to Taiwan, which China considers a breakaway province that must reunify with the mainland.

Mr Trump outraged the Chinese in December when he took the unorthodox step of accepting a phone call from the Taiwanese president.

But the US president agreed to respect the “one China” policy in a telephone call with President Xi in February.

Climate change, which Mr Trump once dismissed as a Chinese hoax, and Beijing’s building of artificial islands in the disputed South China Sea, could also come up.

US china editor - 24/11/2020
0
The Trump administration is close to declaring that 89 Chinese aerospace and other companies have military ties, restricting them from buying a range of...

North Korea: Sanctions tighten screws on regime but China, Russia get their way

World editor - 12/09/2017
0
The UN Security Council has whacked crippling new sanctions on North Korea to force it to negotiate over its nuclear and weapons programs. But it...

Business editor - 27/02/2017
0
The Lu Ban lock, a kind of ancient Chinese puzzle made of six bars, was presented by Premier Li Keqiang as a gift to...

Calls to boycott ‘Mulan’ are gaining steam as the new movie lands on Disney...

chinese movie editor - 06/09/2020
0
Pro-democracy activists across Hong Kong, Korea, and Thailand have renewed their calls for a boycott of Disney’s live-action “Mulan” movie. The film was released for...

Senators pile on the NBA for yielding to China over Rockets GM Daryl Morey’s...

News editor - 07/10/2019
0
U.S. senators accused the National Basketball Association of putting cash over human rights Monday as the league appeared to back communist China after a...

Guo Wengui editor - 14/11/2020
0
On November 14, Mr. Miles Guo had a live broadcast on GTV, encouraging warrior friends from the Whistleblowers' Movement and the New Federal State...

Religion editor - 08/12/2017
0
The impact of the 19th Communist Party of China congress and affirmation of President Xi Jinping as China’s ‘most powerful’ leader in decades seems already to be...

Business editor - 02/09/2017
0
Chinese companies signed commitments on Friday to finance and build railways and ports that will help Brazil export iron ore and soybeans, the two...

News editor - 06/07/2019
0
On June 28, residents of the Yangluo residential district in the central Chinese city of Wuhan took to the streets to protest the construction...

China’s diplomatic wolves: the red curtain falls and the drama is over.

chinese communist party editor - 09/09/2020
0
Two Australian journalists - Bill Birtles and Mike Smith - working in China have made their way home to Australia after forced out from...

Society editor - 24/11/2020
0
-- China has achieved the feat of removing all remaining counties from the country's poverty list. -- Delisting all poverty-stricken counties indicates China has resolved...

World editor - 09/10/2017
0
It was a fresh sign of rapidly warming relations when Japanese Prime Minister Shinzo Abe made a surprise appearance at a gala hosted by...