The Chinese government is trying to hijack one of this year’s hottest social trends for its own propaganda purposes.

For months, young people across China have been posting images of themselves pretending to fall out of cars or trip, spreading their expensive belongings in front of them, as if they’ve just casually fallen out of their pockets.

It’s called the “flaunt your wealth” challenge and, although it isn’t clear where it started, it has taken Chinese social media by storm.

It isn’t just huge in China — people across the world including Russia and Australia have taken the opportunity to show off, under the hashtag #fallingstars.

Originally popular among wealthy Chinese women, the trend rapidly spread across all parts of society.

“It is no longer just the rich people who are falling off their yachts or planes. It’s people from all professions — doctors, lawyers, workers, even babies. It’s hilarious,” Haiqing Yu, Chinese digital media expert at Melbourne’s RMIT University, told CNN.

But as the viral craze spread from wealthy to ironic posts by regular internet users, the Chinese government saw an opportunity to hijack the meme for its own means.

Employees of local government organizations across the country posted photos of themselves lying on the ground, surrounded by their simple work tools or the honors they had received for their hard work. 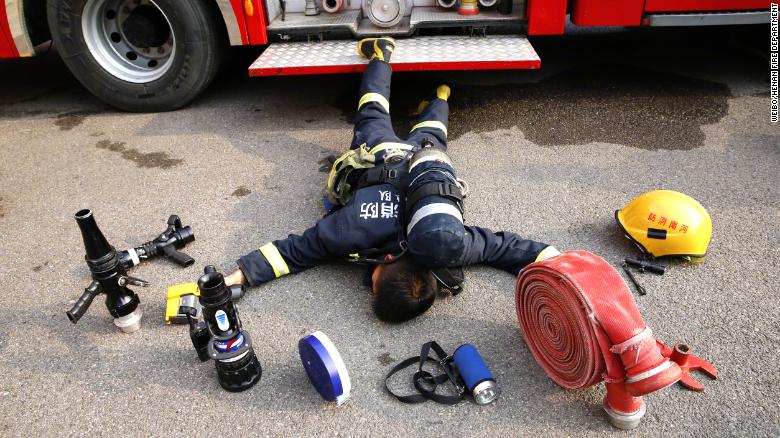 A Henan Fire Department firefighter lies among the tools he uses in his everyday job.

“This is the real positive energy of the people,” China’s Ministry of Emergency Management posted alongside pictures of firefighters taking the challenge.

“It is too painful to see that the pursuit of money and power affects young people now. Only when we support the hardworking young people will our motherland have hope.”

One student at Hainan University lies on the floor surrounded by books by Karl Marx and Chinese leaders Mao Zedong and Deng Xiaoping. 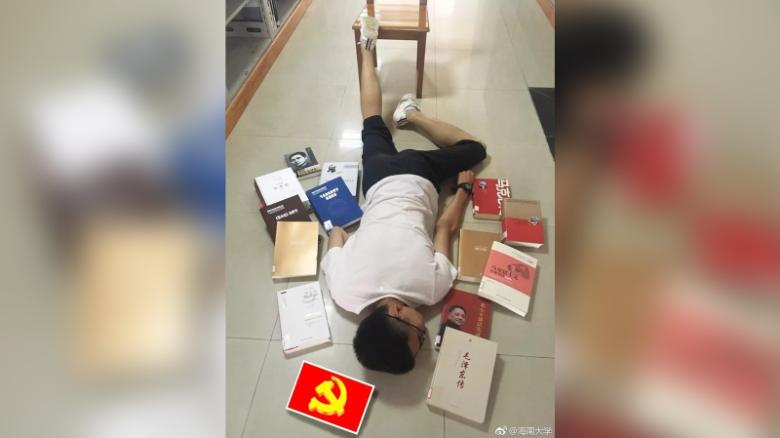 A student at Hainan University lies among his text books, including works about Karl Marx, Mao Zedong and Deng Xiaoping

People’s Daily, the official mouthpiece of the Chinese Communist Party, compiled a selection of students and government employees “flaunting their wealth,” praising them for knowing what was truly valuable in life.

“These pictures may seem posed, but they show that the young generation dare to express themselves … they flaunt their love and commitment for work. If everyone is hardworking at the work at hand, it will be the biggest wealth for the society,” the publication’s social media post said.

Yu said the government was using the meme to spread “positive energy,” a propaganda catch phrase used by the Chinese Communist Party to ensure content on the Chinese internet adheres strictly to “socialist values”.

“The flaunting the wealth trend is seen as corrupting by the government to Chinese society, (so instead now) you see a variety of people from different professions, age groups and of course male and female doing the same sort of thing,” she said.

“Chinese propaganda is no longer as sharp as it used to be, but soft.”

Is buying online from China a good idea?

Lifestyle editor - 03/09/2017
0
The bluetooth smartwatch from Senbono has a remarkable resemblance to an Apple Watch but costs as little as £10. A gaming mouse is £25...

Money editor - 25/02/2017
0
(Beijing) — China’s insurance regulator has banned Yao Zhenhua, a billionaire who was thrown into the limelight during a protracted, high-profile hostile takeover bid,...

Thanks to President Xi, Santa Claus is not coming to town as China bans...

Society editor - 20/12/2018
0
"We will resolutely reform what should and can be reformed, and make no change where there should not and cannot be any reform," Chinese...

Military editor - 28/11/2019
0
Editorial Note: After signing his name into the Hong Kong bill, Donald Trump is heading for Afghanistan on a great mission, apparently targeting the...

Xi Jinping now hiding in a bunker because he fears targeted killings by the...

chinese government editor - 09/01/2021
3
According to news reports by several Chinese Communist Party(CCP) media outlets, Xi Jinping may not be able to deliver his signed documents or orders...

Guo Wengui’s urgent message on the crisis of Hong Kong

Guo Wengui editor - 13/11/2019
0
Dear warrior friends! Today is November 12. This is an emergency live broadcast from Wengui on the crisis of Hong Kong. Last night, we worked...

Corruption in Peking University is linked to top CCP leadership

Guo Wengui editor - 14/01/2019
0
Note：Founder Group was established by Peking University in 1986.  It currently has six public companies listed in stock exchanges of Shanghai, Shenzhen, and Hong Kong, and more than 80 independently...

Two Chinese people being treated for pneumonic plague as authorities clamp down on online...

Society editor - 14/11/2019
0
Two people from China have been struck down with the pneumonic plague, a rare lung infection which is present in rodents. Key points: The two...

In China, rural rich get richer and poor get poorer

Politics editor - 10/08/2018
0
Rifts are growing in China's Communist Party, with some critics saying that an overly nationalistic Chinese stance may have hardened the US position...

hong kong editor - 11/11/2019
0
A Hong Kong police officer has shot an apparently unarmed protester at close range in the stomach with a live bullet, potentially inflaming an...

Business editor - 29/07/2020
0
China should prepare for potential U.S. sanctions by increasing use of its own financial messaging network for cross-border transactions in the mainland, Hong Kong...