Tucked away on the third floor of a building in an upscale area of the capital, Cinker was envisioned by its three partners as a place for movie lovers who want to revisit Hollywood classics, European art house films and vintage Chinese favorites.

Some recent showings: “The Godfather” and “Love on Lushan Mountain,” along with early Woody Allen and Agnès Varda. 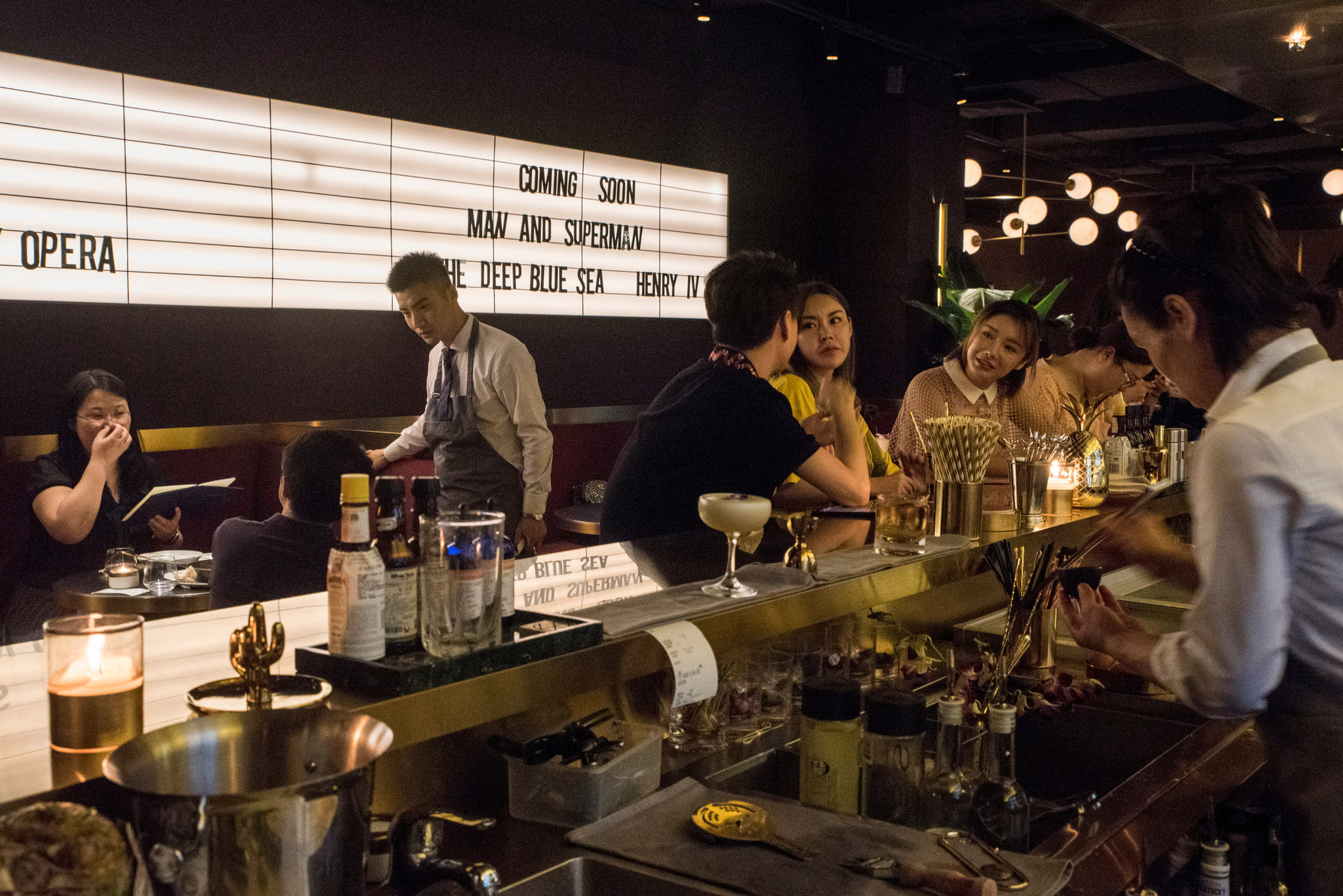 A big attraction is a 1930s style brass-accented bar for ordering fancy drinks during or after the screening. CreditGilles Sabrié for The New York Times

Amanda Zhang, a former criminal lawyer and a partner in the venture, is around most nights schmoozing with regular diners in the clubby restaurant and presiding over the 1930s-style brass-accented bar.

Ms. Zhang’s glamour — she may wear red silky shorts and a flowing top, or a black evening suit, or a form-fitting emerald green sheath, always with skyscraper heels — is meant to recall the splendor of Hollywood’s golden age.

Cinker emerged six months ago, an experiment in offering an alternative to Beijing’s standard commercial theaters and a couple of out-of-the-way screening rooms that show old films. The founders invented the name Cinker as shorthand for Cinema Maker.

A place with an eclectic schedule (by Beijing standards) and a beckoning atmosphere offered a good start, he said. Shanghai has always been considered the movie home of China — the big production studios opened there after 1949, and most of them remain there. Opening a jewel box cinema in the political capital was considered a brave move, a challenge to the conventional nod to Shanghai as the center of style. 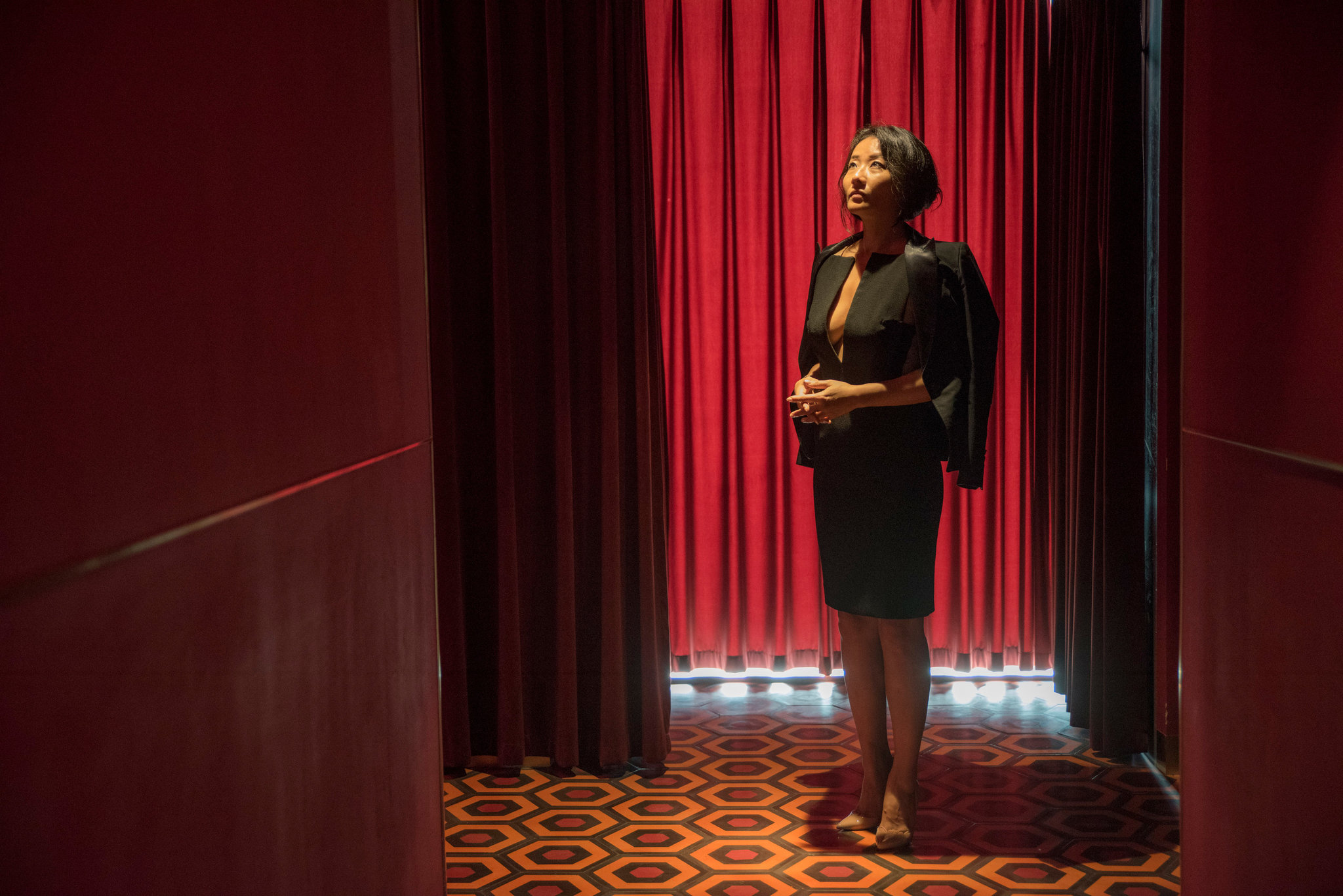 Amanda Zhang, a former criminal lawyer and one of the three partners in the venture, is around most nights talking with regular diners. CreditGilles Sabrié for The New York Times

Cinker is a contemporary twist on a turn-of-the-20th-century movie hall, the Electric, in the London neighborhood of Notting Hill Gate, where the audience sits on plush sofas, armchairs — even beds — and movies are shown on a stage dominated by a gilded ornate proscenium.

Mr. Yan recalls going to the Electric with his girlfriend. “It is a vintage cinema, you could lie down on a sofa, have a cocktail from the bar, watch a movie — an amazing experience.”

They chose a similar upscale district in Beijing called Sanlitun, which, like Notting Hill Gate, was a down-at-heel bar quarter in the late 1980s and ’90s, with dozens of foreign embassy buildings along its edges.

Then, artists rented hole-in-the-wall spaces to be close to the diplomats who could afford to buy their paintings, and in the early 2000s, the director Quentin Tarantino lent a movie flavor when he hung out at a night spot called Vogue and worked on shooting his first martial arts movie, “Kill Bill,” during the day.

Beijing’s city planners had other ideas than allowing valuable central real estate to lie idle to low-paying renters. In the mid-2000s, the seediness gave way to China’s first Apple Store, then fashion boutiques and now, a decade later, a Mercedes Me showroom with the most expensive models spilling onto a plaza with giant screen videos and a high-end cafe nearby.

By locating in Sanlitun, Mr. Yan and Ms. Zhang, and Lin Fan, an owner of one of Beijing’s fancy restaurants and a producer of Chinese movies, are appealing to habitués of the premier axis of the city’s all-enveloping consumer culture. They are also exploiting changes in moviegoing habits.

Box office revenue from Hollywood blockbusters dropped in China in the first six months of this year after many years of growth. For example, “Transformers: The Last Knight” fared less well than expected, while the Bollywood drama “Dangal” did much better. Audiences have become more sophisticated, and more fickle. And in China, as elsewhere, more moviegoers are watching videos provided by online streaming services.

As the moviegoing audience fragments, Cinker appeals not only to the steady niche audience for classics, but also to a wide spectrum of people who have fallen in love with foreign actors who have starred in popular TV series.

To their surprise, Ms. Zhang said, Britain’s National Theater Live series with actors like Benedict Cumberbatch, who appears in “Sherlock” — the British detective series that was a major television hit in China — have been among their biggest draws.

Cinker opened with a screening of Wes Anderson’s “The Grand Budapest Hotel,” a 2014 favorite of the three partners. The décor of Cinker’s bar and restaurant — brass wall lights, plush red curtains — harks back to the movie. 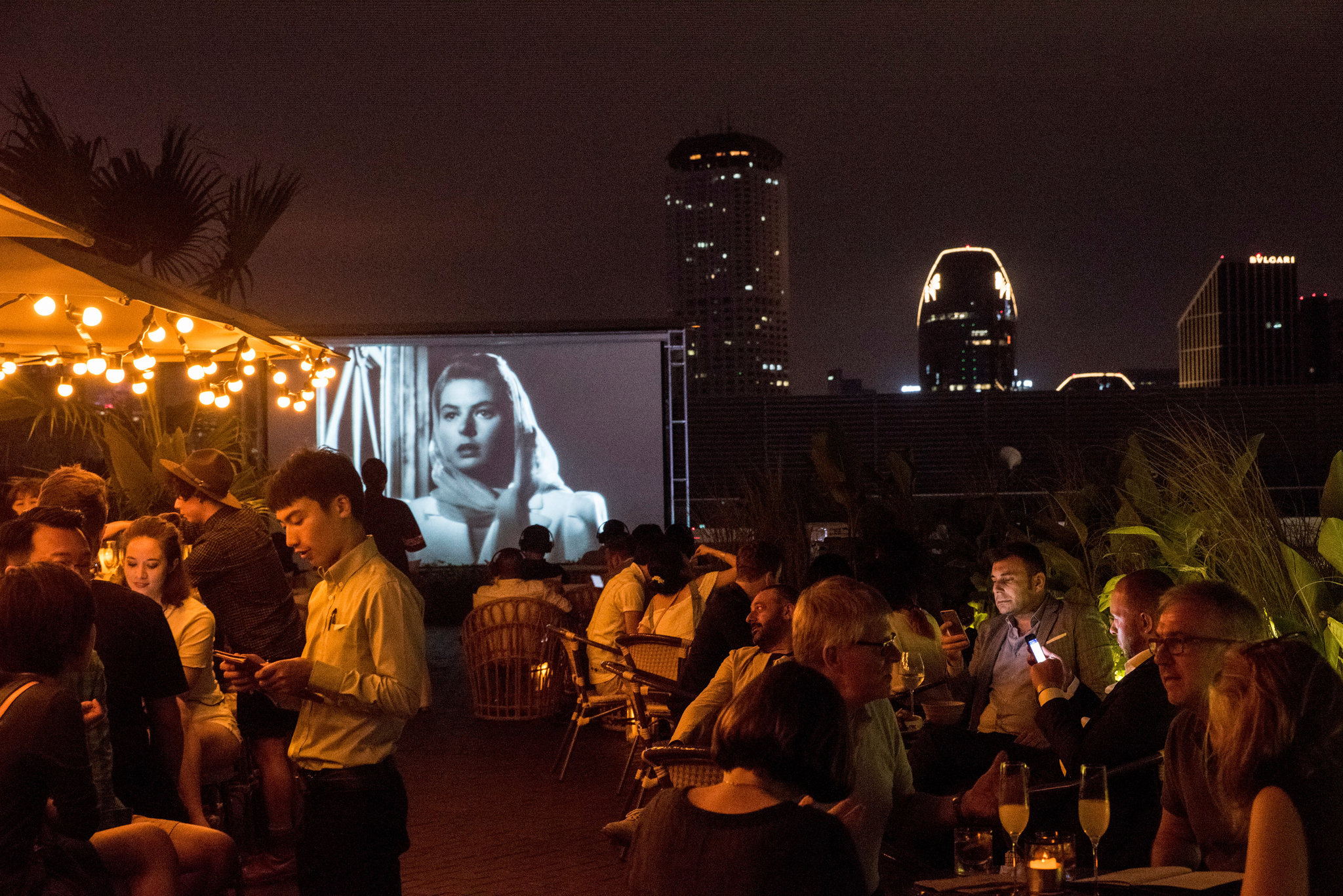 A screening of “Casablanca” on the opening night of Cinker’s rooftop cinema. CreditGilles Sabrié for The New York Times

“A lot of our audience likes to watch movies that are not really box office hits,” Mr. Lin said. “‘Budapest Hotel’ only got a very short showing in China.” The Woody Allen movies and “The Godfather” never had commercial releases and were available only on DVD, he said.

The repertoire for Cinker is limited, though, by China’s all-powerful government Shanghai Media Group, the conglomerate that controls movie distribution, and must obey the censor’s strictures. Like all movies, “Titanic,” for example, was examined by the censors. Yet it emerged with flying colors. Communist party members were instructed to see the film, one of the first foreign movies released here in 1997, for lessons on bravery, and how even a capitalist moviemaker could tell the story of a poor boy falling for a rich girl.

From a library of about 4,000 movies at the media group, about 20 percent are suitable for a Cinker screening, Mr. Yan said. The Hollywood favorites come mostly from that backlist, he said.

“The Godfather, Part 1” sold out the fastest, helped along by a package deal of a movie ticket and an Italian dinner. Patrons were encouraged to turn up in dress that matched the characters, and some arrived in flowing gowns and tuxedos.