The Chinese authorities have refused permission for Liu Xiaobo, a Nobel Peace laureate paroled from prison for cancer treatment, to go abroad for care, one of his lawyers said on Thursday.

The authorities did not explain the rejection, according to the lawyer, Shang Baojun. The news undermined hopes among supporters of Mr. Liu, a writer and dissident, that he might be freed altogether, if not allowed to leave China. He remains under police guard in a hospital.

There have been signs that China’s leaders were growing sensitive to the international attention that Mr. Liu’s case has received, especially allegations that the government had effectively caused him to become gravely ill by failing to treat his liver cancer while he was incarcerated.

The judicial department of the northeastern province of Liaoning, where Mr. Liu has been serving his sentence and is being treated, released a statement Wednesday evening saying that he had received regular checkups in prison and that the cancer had been detected only a month ago.

That followed the release of a video of Mr. Liu in prison — the first public glimpse of him since he was sentenced in 2009 — showing him exercising and undergoing what appeared to be routine medical tests.

The statement said that a team of specialists had convened to oversee Mr. Liu’s treatment on June 7, apparently leading to the decision to transfer him from his jail cell on medical parole. The condition of Mr. Liu, who is 61, was not clear from the statement, though his lawyers and friends, citing his wife, said that his cancer was so advanced that there appeared to be little hope of recovery.

Dozens of prominent writers have appealed directly to China’s president, Xi Jinping, to grant Mr. Liu unrestricted medical care, including the opportunity to leave the country if he chooses. The appeal, organized by PEN America, also urged the authorities to free Mr. Liu’s wife, the poet Liu Xia, who has been under house arrest since 2010 even though she has never been charged with a crime. Ms. Liu has appealed for her husband to be allowed to seek treatment abroad.

“We applaud your decision to grant him medical parole, and hope that it will be accompanied with due regard for the steps necessary to ensure that, however much time he may have, he is afforded the dignity and autonomy that every human being deserves,” read the letter, which was signed by about 50 authors, including Martin Amis, Margaret Atwood, J. M. Coetzee, Philip Roth and Salman Rushdie.

Freedom Now, an advocacy organization in Washington, released a similar appeal, signed by 154 Nobel laureates in each of the prize’s disciplines.

On Thursday, a letter endorsed by 154 Nobel laureates and addressed to Mr. Xi called for Mr. Liu and his wife to be allowed to travel to the United States.

It would be highly unusual for the government to grant someone like Mr. Liu leniency. A leader of the protests in Tiananmen Square in 1989, he was one of the main organizers of a public appeal in December 2008 for greater democracy in China, which became known as Charter 08. He was swiftly arrested; the following year, he was convicted and sentenced to 11 years in prison. 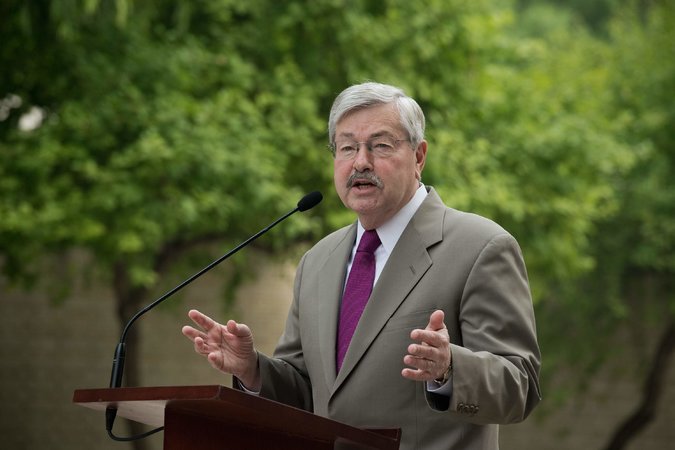 Terry Branstad, the American ambassador to China. He said he would love to see Liu Xiaobo get treatment “elsewhere,” but he did not explicitly call for Mr. Liu’s release.CreditNicolas Asfouri/Agence France-Presse — Getty Images

He was awarded the Nobel Peace Prize in 2010 for his “long and nonviolent struggle for fundamental human rights in China.” He was represented at the ceremony in Oslo by an empty chair.

Mr. Xi, who is preparing for a Communist Party congress in the fall that is expected to consolidate his authority, has overseen a crackdown on dissent since rising to power in 2012.

The new American ambassador to China, Terry Branstad, raised the possibility on Wednesday of Mr. Liu’s release for medical treatment “elsewhere.” Speaking to reporters, he also promised to use his personal relationship with Mr. Xi, whom he met during a Chinese trade delegation’s visit to Iowa in 1985, to help President Trump address thorny issues in the United States-China relationship like human rights.

Mr. Branstad did not explicitly appeal for Mr. Liu’s release, and it was not clear whether any efforts were underway behind the scenes to negotiate one.

Mr. Trump is expected to meet with Mr. Xi at the Group of 20 summit meeting in Germany next week. The details of their meeting, which is expected to focus on North Korea’s nuclear weapons, are still being worked out, China’s vice foreign minister, Li Baodong, said at a briefing on Thursday.

The video of Mr. Liu in prison — which first appeared on boxun.com, a Chinese-language website based in the United States — was clearly filmed and edited by the prison authorities. But it was impossible to verify the circumstances surrounding the video, including the timing of its release and whether Mr. Liu consented to its being made.

In it, Mr. Liu briefly speaks through a glass barrier with his wife, praising two officials he called Mr. Dai and Mr. Jin. “They are nice, and they have paid great attention to my health,” he said. “Very good. I am very grateful to them.”

Later, he is shown telling a doctor that he contracted hepatitis B two decades ago. The inclusion of that footage appears to be an attempt to suggest that his current illness stemmed from a pre-existing medical condition, not mistreatment behind bars. Hepatitis B increases the risk of developing liver cancer, according to the World Health Organization.

Ms. Liu, who is also said to be in poor health, has been allowed to visit her husband in No. 1 Hospital of the China Medical University in Shenyang, the capital of Liaoning, but the police officers guarding him have not permitted his lawyers or others see him.

An acquaintance of the couple who lives abroad, Liao Yiwu, said Ms. Liu wrote a letter in April suggesting that her husband had agreed to leave China if he were released, and that she also wanted to do so. If the authorities’ claim about Mr. Liu’s diagnosis is correct, then it was written before she knew of his cancer.

Global Times, a state-run newspaper, published a scathing editorial Wednesday night about the concern for Mr. Liu’s health. It appeared only in English, suggesting it was not intended to draw Chinese readers’ attention to Mr. Liu’s case. “The West put a halo on Liu for their political goals, but this cannot change Liu’s risk of cancer,” it read. The editorial, which was unsigned, went on to say that Mr. Liu was “an ordinary prisoner.”

“He ought to be grateful for the extra help from the prison authorities, but he and his supporters have no right to demand preferential treatment,” it read.

Society editor - 28/07/2017
0
Outrage is growing in China over a video that appears to show mistreatment of two giant panda babies at a famed research facility in...

chinese movie editor - 31/12/2018
0
New local Chinese titles beat Hollywood heavyweights “Aquaman” and “Spider-Man: Into the Spider-Verse” at the box office this weekend, with a remake and a...

Art & Entertainment editor - 03/04/2017
0
An Andy Warhol portrait of Chairman Mao has been sold at a historic auction in Hong Kong - but fell short of its top...

US releases Report on Military and Security Developments Involving China

Military editor - 01/09/2020
0
The Department of Defense announces the release of its annual report on "Military and Security Developments Involving the People’s Republic of China." The congressionally mandated...

Lifestyle editor - 04/02/2017
0
By Jane Cai Chinese billionaire Jack Ma plans to donate US$20 million to fund a scholarship at an Australian university to honour a late friend from...

The Origin of the CCP Virus and the Great Reset

chinese government editor - 21/03/2021
0
On February 9, 2021, the WHO International Investigation Team stayed at the Wuhan Institute of Virology (WIV) for three and a half hours. The...

Politics editor - 25/07/2017
0
China’s government reined in one of its brashest conglomerates with the approval of President Xi Jinping, according to people with knowledge of the action...

hong kong editor - 08/07/2020
0
At midnight on Tuesday, the Great Firewall of China, the vast apparatus that limits the country’s internet, appeared to descend on Hong Kong. Unveiling expanded police...

Uncategorized editor - 22/11/2017
0
China has been pumping a lot of cash into its system to lift market sentiment, as the world's second-largest economy walks a thin line between curbing...

chinese government editor - 13/05/2021
0
Another June 4th comes by in less than a month. It will be the 32nd anniversary of the brutal Tiananmen Massacre in Beijing that crushed...

taiwan editor - 01/08/2019
0
Taiwan’s president rebuked China on Thursday over its decision to ban individual travel permits for Chinese visitors to the self-ruled island, saying the move...

Facebook’s Long-Awaited Entry Into China Market May Be Near

Social media editor - 20/09/2017
0
Facebook stands a good chance of getting approval to enter China, following the recent success of Airbnb and LinkedIn before it, one analyst report said Tuesday. Mizuho...

America’s ‘golden visa’ is losing its luster in China

Society editor - 30/09/2017
0
Chinese people appear to be losing interest in a controversial American visa program that has funneled billions of dollars to U.S. real estate developers. For...