Where it was once inevitable that those who left to study at prestigious foreign universities would remain on distant shores for years, China’s graduates are now answering the call of home more than ever before — and many are turning down lucrative careers on Wall Street or in Silicon Valley in favor of Beijing, Shanghai and Shenzhen.

The term “sea turtle” or 海归 has long been used in China to refer to people who have returned home after having studied abroad for several years. Typically, the majority of these students who went abroad to study would stay. The National Science Foundation reported in 2013 that 92% of Chinese graduates with American PhDs still lived in the U.S. five years after graduation.

These so-called “sea turtles” have long been prized by Chinese companies, both for the quality of their education as well as their experience of living abroad. Graduates from foreign universities were difficult to lure, however. Studies indicated that a large proportion of Chinese graduates tended to stay abroad post-graduation. As such, graduates who could be enticed back home were rewarded with inflated pay packages and benefits, in an effort to keep them happy.

However, evidence now points to a reversal of this trend. Five years ago, government figures showed that the number of Chinese students studying overseas was 339,700, with 186,200 choosing to return to China after graduation. More than half of graduates were therefore choosing to remain abroad.

Studying abroad is still an attractive option for students, as figures show that graduates from foreign universities can still expect to earn more than graduates from Chinese universities. This wage gap still exists today, although it is narrowing. Overall, graduate wages in China have declined in recent years, but the trend of students choosing to return to China upon graduation is set to continue, spurred by a number of factors.

First is the strength of the Chinese economy, and in particular the tech industry. The total output of China’s information technology industry grew by 10% year on year in 2016, according to China Daily. And while overall GDP growth has slowed in more recent months, large tech companies such as Tencent and Alibaba are still expanding exponentially. The two companies are now worth more than a trillion dollars combined.

For smaller tech startups, venture capital continues to flood the country. According to a recent Prequin report, more than $65 billion of venture capital investments were made in Greater China last year, a 35% increase year on year and an all-time high, second only to North America with $77 billion.

The second factor is the so-called “bamboo ceiling,” a theory that posits that Chinese graduates can expect to be employed in tech companies abroad, but are rarely promoted as far as upper management. The term, first coined by Jane Hyun in her 2015 book Breaking the Bamboo Ceiling: Career Strategies for Asians, has plenty of basis in reality.

A 2015 study by non-profit Ascend found that among five large tech companies (Google HP, Intel, LinkedIn and Yahoo), Asians and Asian Americans represent 27% of professionals, but only half that among executives. 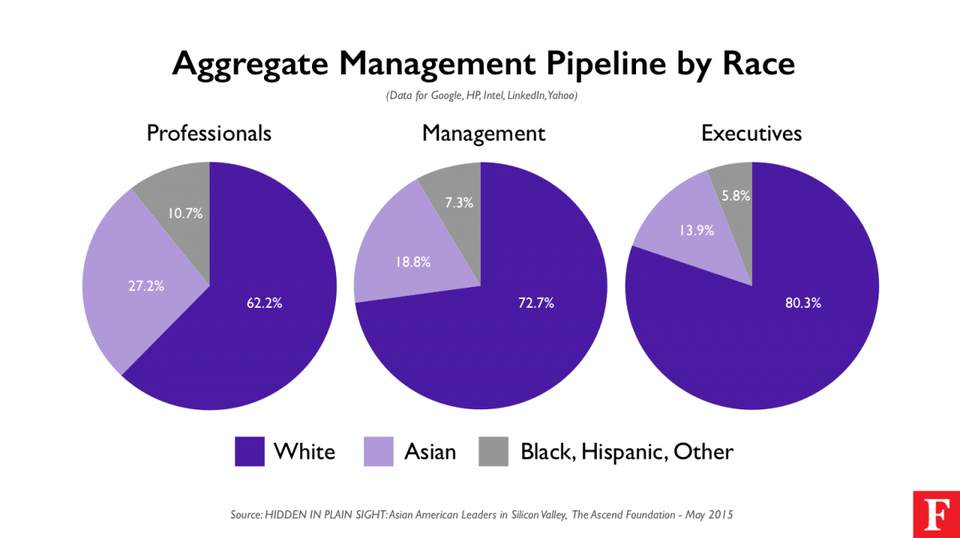 Finally, there is the sense of home that continues to draw graduates back in greater numbers.

Up until a few years ago, Kevin Diao was content with his life in the U.S.  Having graduated from New York University with a dual degree in finance and economics, he quickly secured a Wall Street investment banking job, and was earning millions of yuan a year. Something, however, was drawing him back to his native China.

“If I’d stayed on Wall Street, I thought I might end up being a managing director at some bank,” the 29-year old told Forbes. “But China is different. The market is moving so fast, and there are so many opportunities. ”

He took the leap, founding Meixin Finance, a wealth management company soon after relocating to Beijing in 2015, and last year raised “tens of millions of dollars” in investment led by Korea Investment Partners. Diao now aims to satiate China’s growing appetite for overseas investment by connecting opportunities abroad with wealthy families and investment institutions back home.

China is not only focusing on winning back homegrown graduates, however. The country is also hoping to attract increasing numbers of foreign graduates to Chinese shores, and in 2017 reformed its visa programme to allow Chinese companies to more easily hire foreign graduates on work visas. According to China Daily, the number of foreigners working in China grew three times to 220,000 between 2000 and 2010.

In addition, universities are hoping to attract foreign students to study there. China recently stated that it aims to become Asia’s top destination for international students by 2020, targeting 500,000 foreign students enrolled per year by then.

Money editor - 10/08/2017
0
You know you’ve gotten big when the central bank worries about your promotional activities. Such is the case with Ant Financial, which runs the biggest mobile payments...

Society editor - 27/11/2017
0
Pictures of two Chinese boys who travelled 80km (50 miles) in the undercarriage of a bus have sparked an online outcry about the welfare...

human rights editor - 22/06/2017
0
Mark Ching and his group 'Animal Hope and Wellness Foundation' have intercepted dozens of cages packed with dogs that were bound for the festival...

China is about to hold a giant meeting on spending billions to reshape the...

Trade editor - 11/05/2017
0
China has rapidly climbed the ranks to become the world's second-largest economy. Now, the most populous nation on the planet wants to increase its...

China’s Seaport Shopping Spree: What China Is Winning By Buying Up The World’s Ports

World editor - 07/09/2017
0
In a bid to bolster its position as a maritime powerhouse, secure key supply chains, enhance its international trade capacities, and build up geo-economic...

Guo Wengui editor - 10/06/2019
0
Riot police have clashed with protesters in Hong Kong after over one million of people marched through the streets in a massive demonstration against a proposed...

Society editor - 08/08/2017
0
CHINA has been rocked by two big earthquakes, the first striking in the southwestern Sichuan province last night and the second striking this morning...

Moving China: The Spring Festival train journey now and then

Society editor - 02/02/2019
0
Veteran train driver Zhou Li, 54, has driven all four generations of Chinese trains -- from steam locomotives to high-speed. Having spent two-thirds of his...

Is President Xi Jinping losing control of the CCP leadership?

China slowly reveals the world’s fastest train. I rode it as it hit 352...

Travel editor - 27/09/2017
0
With a sense of timing fitting for China's most successful industrial project, the country's newest bullet train didn't give up all its secrets immediately. The...