Military force cannot resolve tension over North Korea, China said on Thursday, while an influential Chinese newspaper urged the North to halt its nuclear program in exchange for Chinese protection.

Concerns have been growing that North Korea could soon conduct a sixth nuclear test or more missile launches in defiance of U.N. sanctions and stark warnings from the United States that a policy of patience was over.

With a U.S. aircraft carrier group steaming to the area in a show of force and tensions rising, fears of a confrontation have been rising.

China, North Korea’s sole major ally and neighbor, which nevertheless opposes its weapons program, has called for talks leading to a peaceful resolution and the denuclearization of the peninsula.

“Military force cannot resolve the issue,” Chinese Foreign Minister Wang Yi told reporters in Beijing. “Amid tensions we will also find a kind of opportunity to return to talks.”

While U.S. President Donald Trump has put North Korea on notice that he would not tolerate any provocation, U.S. officials have said his administration was focusing its strategy on tougher economic sanctions.

Trump said on Thursday Pyongyang was a problem that “will be taken care of” and that he believed Chinese President Xi Jinping would “work very hard” to help resolve the challenge.

Trump has also said the United States is prepared to tackle the crisis without China, if necessary.

Trump diverted the USS Carl Vinson aircraft carrier group toward the Korean peninsula last weekend in a show of force to try to deter North Korea from conducting another nuclear test or launching more missiles to coincide with important events and anniversaries.

But a senior Trump administration official described as “flat wrong” an NBC News report citing senior U.S. intelligence officials as saying the United States is prepared to launch a pre-emptive conventional weapons strike should officials be convinced North Korea was about to follow through with a nuclear weapons test.

Scores of foreign journalists are gathered in Pyongyang for North Korea’s biggest national day, the “Day of the Sun”, marking he 105th anniversary of the birth of state founder Kim Il Sung on Saturday. 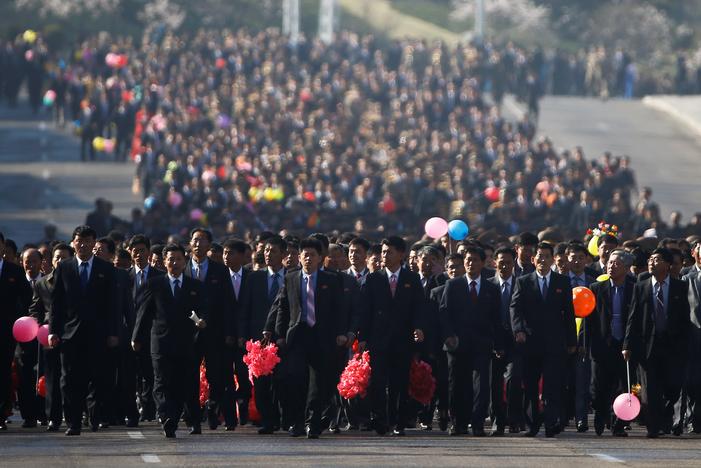 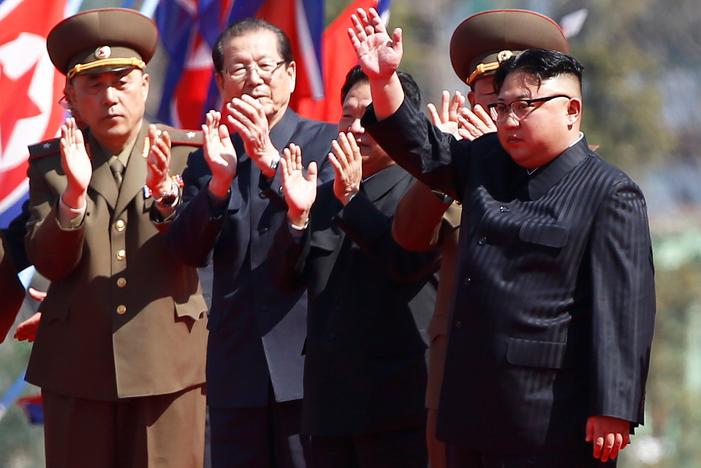 They were taken to what officials billed as a “big and important event” early on Thursday which turned out to be the opening of a new street in the center of the capital, attended by current leader Kim Jong Un.

In 2012, two days before the centenary of Kim Il Sung’s death, it tried but failed to launch a long-range rocket carrying a satellite. It tested a newly developed intermediate-range missile on the anniversary last year, a launch that also failed.

A Washington-based think tank that monitors North Korea, 38 North, said satellite images on Wednesday showed activity around the North’s Punggye-ri nuclear test site on the east coast that indicated it was ready for a new test.

South Korean and U.S. officials and the think tank have been saying for weeks that North Korea could test a sixth bomb at any time.

CIA director Mike Pompeo said North Korea was closer now than it had ever been to being able to threaten the United States with a nuclear-tipped intercontinental missile and increased its technical know-how with each new test.

This in turn reduced U.S. options and “makes it more likely that you get a bad decision, a tough day for the leader of North Korea,” he told Washington’s Center for Strategic and International studies.

Asked if there was hope that China would do more to slow or suspend its nuclear program, he replied: “I’m counting on it.”

Speculation about U.S. military action grew after the U.S. Navy fired 59 Tomahawk missiles at a Syrian airfield last week in response to a deadly gas attack.

Washington said North Korea should see the strikes as a sign of U.S. resolve, but U.S. officials have played down the prospect of any military strike against North Korea, which would likely provoke massive North Korean retaliation and huge casualties in Japan and South Korea and among U.S. forces in both countries.

The United States has remained technically at war with North Korea since the 1950-53 Korean conflict ended in an armistice rather than a peace treaty and the past six decades have been punctuated by periodic rises in tension and rhetoric that has always stopped short of a resumption of active hostilities.

Analysts have interpreted China’s warnings as an effort to persuade North Korea to shelve plans for more tests.

Wang warned that history would hold any instigator to account.

“Whoever provokes the situation, whoever continues to make trouble in this place, they will have to assume historical responsibility,” Wang said.

South Korean Foreign Minister Yun Byung-se told parliament in Seoul he believed Washington would consult Seoul if it was considering a pre-emptive strike.

An influential state-backed Chinese newspaper, the Global Times, said North Korea’s best option was to give up its nuclear program, and added that China would protect it if it did.

“As soon as North Korea complies with China’s declared advice and suspends nuclear activities … China will actively work to protect the security of a denuclearized North Korean nation and regime,” it said in an editorial.

But a senior Japanese diplomat said Japan also did not see a high risk of military action.

On Tuesday, North Korea warned of a nuclear attack on the United States at any sign of American aggression. The White House dismissed the threat, saying there was no evidence North Korea could carry it out.

Customs data in Beijing on Thursday showed China’s coal imports from North Korea had plunged 51.6 percent in the first three months in 2017 from a year earlier.

China suspended permit issuance for North Korean coal imports on Feb. 18 as part of its effort to implement U.N. sanctions.

The world is holding its breath, awaiting something big to happen