This may be a glass half-full moment.  Either China is catching up to parts of Europe in terms of wages, or wages in the newest parts of the European Union are being capped by the global competition for labor, a competition that China wins, hands down. In reality, it’s both.

Shanghai’s median wages, in particular, are also greater than two of the newest euro members in the Baltics: Lithuania ($956) and Latvia ($1,005), with Estonia, which joined the euro in 2011, recording a median income of $1,256 per month, according to government figures for 2016.

Over the last 10 years, Europe has sought to incorporate the skilled, lower cost labor pool from Eastern Europe into the fold of the European Union.  In 2002, China became more fully integrated into the global labor force when it joined the World Trade Organization.  The combination of these two massive labor pools into the workforce set the stage for wage stagnation among lower skilled and assembly line labor worldwide.

In economic jargon, this is described as the ‘flattening of the Phillips Curve’ says VTB Capital economist Neil MacKinnon.

“The impact of globalization and the entry of China into the WTO in 2002 increased the global labor supply markedly,” he says. Excess supply of Chinese labor and the stream of low-cost Chinese goods into the world economy was a boon for global consumers, but it also meant that certain products and jobs that were done in Eastern Europe were going to have to compete with cheaper China. Supply chains and markets aside, the biggest cost to a company is its workforce. China’s workforce is finally getting paid. Eastern Europe’s China-like wages are just par for the course in a world where the motto has become: anything you can do, China can do cheaper.

China sets the price for manufacturing labor and, in the future, e-commerce related logistics. Some Europeans should hope for China’s continued pay increases if they want an increase in gross wages themselves.

China’s share of world trade (an average of exports plus imports) increased from slightly less than 2% in 1990 to almost 15% today, according to the Bank for International Settlements. Since then, China’s economic markets have joined the global economy, led primarily by its labor force with a capital-to-labor ratio below global standards. China is only now starting to automate.

Eastern Europe’s integration into the West is often overlooked. 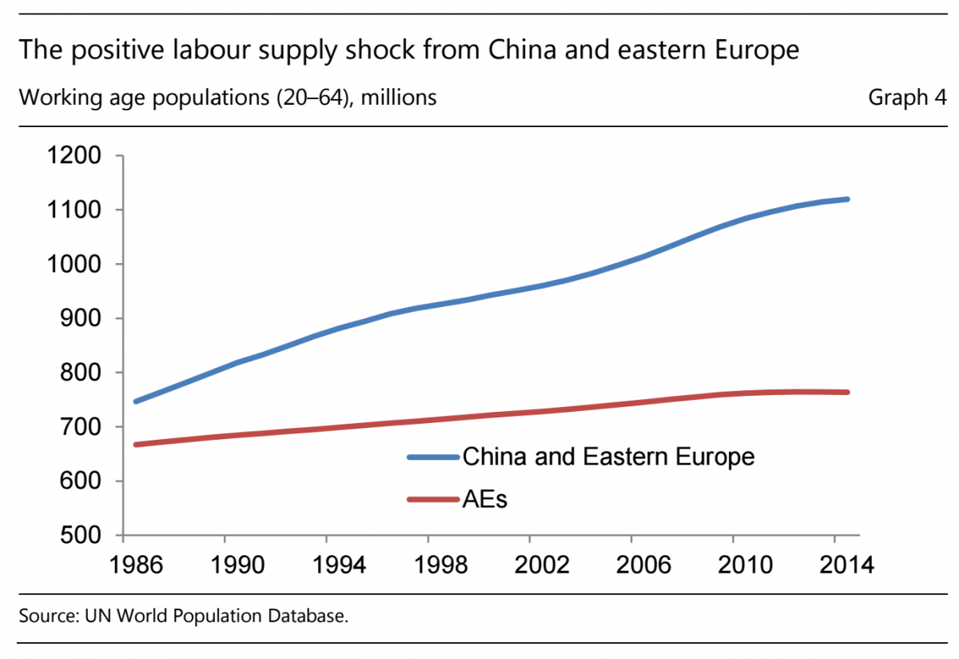 China and Eastern Europe’s integration into the world economy have put wages in new EU nations on par with China’s. In the pay race, China is catching up and Eastern Europe is not moving nearly as quickly as the two labor pools are part of a global system that now sets the cost for lower skilled labor.

Over a similar time span, between the 1990s to today, Eastern European countries have fallen out of Russia’s orbit and moved Westward. Prior to the fall of communism, these countries had been more or less isolated. Labor was abundant and well educated, but capital and management were limited. So a fruitful combination ensued: Western Europe supplied the money and the management, Eastern Europe supplied the cheaper labor.

The numbers associated with the integration of China and East Europe are staggering. Counting just the potential workforce, the working population in China and eastern Europe between the working ages of 20 to 64 was 820 million in 1990 and hit 1.2 billion by 2015. The available working population in the industrialized countries of Europe was 685 million before the crack-up of the Soviet Union in 1990 and hit 763 million in 2014, a one-time increase of 120% in the workforce that put the brakes on wages for lower skilled workers, according to the BIS.

Using those three Chinese cities as a gauge, their employees’ median salaries are higher than those in the poorest section of Europe: the old Communist Balkans.

Just across from the Adriatic Sea on rich Italy’s border sits a Chinese-like labor pool. Only they come cheaper, in fact. Chinese workers in Shanghai, Shenzhen, and Beijing, on average, earn more than workers in Albania, Romania, Bulgaria, Slovakia, and new NATO member  Montenegro, which has a median income of just $896 a month.

Shanghai median wages are not all that much different than Poland’s at $1,569. The same goes for the Czech Republic, with its median salary in Prague, its richest city, sitting around $1,400.Hungary’s gross average wage is right in Shanghai’s wheelhouse, at $1,139 per month.

China’s wage growth is impressive. Great for the Chinese. But it has capped wage growth in many of the lower income states within Europe. What these numbers show is that China’s role as manufacturing hub has set the table for any future uptick in wages, especially for the baseline workers in manufacturing, but soon in other new industries like e-commerce.

World editor - 13/09/2017
0
U.S. President Donald Trump is likely to make a stop in China in November during his first official visit to Asia, a U.S. official...

A Call for Investigation Into HNA Group’s Activities in the US and Likely Corrupt...

Guo Wengui editor - 19/08/2017
1
China Human Rights Accountability Center, August 15, 2017 We are writing this open letter to express our deepest concerns about the highly suspicious activities of...

US china editor - 06/06/2020
0
The Chinese Communist Party’s callous exploitation of the tragic death of George Floyd to justify its authoritarian denial of basic human dignity exposes its...

Real Estate editor - 09/01/2017
0
By Bruce Einhorn Earlier this year, Mr. and Mrs. Cai, a couple from Shanghai, decided to end their marriage. The rationale wasn’t irreconcilable differences or...

Tech editor - 09/03/2017
0
Chinese scientists are researching the new material graphene to produce a smart wearable device to enable those with hearing and speaking disability to listen...

Business editor - 10/09/2018
0
Heads of Blackstone and Goldman Sachs will not attend a hastily arranged meeting in Beijing later this week to discuss China’s trade war with...

The US-China Alaska Meeting Is a Show

World editor - 07/01/2018
0
An Iranian oil tanker has collided with a bulk freighter and caught fire off China's east coast, leaving the tanker's entire crew of 32...

US china editor - 08/07/2020
0
Remarks as delivered. Good morning. I realize it’s challenging, particularly under the current circumstances, to put on an event like this, so I’m grateful to...

human rights editor - 31/08/2017
0
A group of Chinese fishermen have been jailed and fined a whopping $7.5 million just weeks after shocking photos emerged of their ship’s hull...

As many as 100 people feared dead in Chinese earthquake

Breaking! CCP has the latest plan for Hong Kong: agree to the five demands.