China has been holding talks with Venezuela’s political opposition to safeguard its investments in the troubled Latin American nation, hedging its bets as pressure builds on Nicolás Maduro, the embattled leader for whom Beijing has been a vital ally.

Chinese diplomats, worried over the future of its oil projects in Venezuela and nearly $20 billion that Caracas owes Beijing, have held debt negotiations in Washington in recent weeks with representatives of Juan Guaidó, the opposition leader heading the U.S.-backed efforts to oust Mr. Maduro, according to people familiar with the talks.

“China recognizes the increasing risk of a regime change and does not want to be on the bad side of a new regime,” said R. Evan Ellis, an expert on Chinese relations in Latin America at the U.S. Army War College. “While they prefer stability, they realize they have to put eggs in the other basket.” 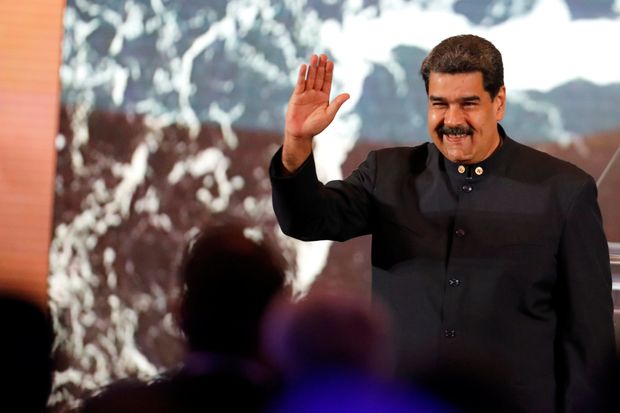 The talks are a sign of the apprehensions building with creditors of Venezuela’s leftist government. Over nearly two decades, loans-for-oil deals with China and Russia have provided vital support for Venezuela. Relations flourished under Mr. Maduro’s predecessor, the late socialist strongman Hugo Chávez, who fortified ties with those countries, Cuba, Iran and even India in an effort to combat U.S. power.

But commercial and financial ties with these countries have been strained since Mr. Maduro, Mr. Chávez’s handpicked successor, took power in 2013 and the economy began to shrink, with oil production plummeting by more than half after years of rampant graft and mismanagement.

China’s Foreign Ministry didn’t respond to a request for comment about Beijing’s contacts with the Venezuelan opposition. In recent weeks, the ministry has suggested that discussions are taking place and Beijing wants to see its interests respected.

China has lent Venezuela more than $50 billion in exchange for oil supplies since 2007 but repayments have dwindled since President Maduro took office in 2013.

Asked about rumored talks at a media briefing on Feb. 1, Foreign Ministry spokesman Geng Shuang said Beijing “has been in close communication with all parties in various ways on the situation in Venezuela.”

“No matter how the situation evolves,” Mr. Geng said, “China-Venezuela cooperation should not be undermined.”

Mr. Guaidó has publicly extended olive branches to China and Russia. The young National Assembly chief, whom lawmakers chose to lead an interim presidency in a direct challenge to Mr. Maduro, has argued that political change would be a precursor to economic reforms to restore stability.

Venezuela, which sits atop the world’s largest oil reserves, should maintain ties with China, the world’s biggest oil importer, he said.

The fall of the Maduro government could work to China’s advantage, said Mr. Ellis. “Guaidó could help lift [U.S.] sanctions and get oil flowing again. At the end China has everything to gain from Guaidó,” he said.

People familiar with the debt-repayment talks said there are significant hurdles. Venezuela has borrowed from China more than $50 billion in a series of loans-for-oil agreements since 2007, and according to estimates by China’s Commerce Ministry it still owes Beijing around $20 billion.

China is unwilling to take a significant loss on its loans, as some of the opposition’s economic advisers have suggested for lenders, including holders of the country’s defaulted bonds, according to two of the people familiar with the talks. Both sides have been discussing grace periods on repayment plans to give any potential Venezuelan transitional government breathing space, they said.

Opposition lawmakers have also long clamored to make the terms of China’s loan deals with Venezuela more transparent, which Beijing opposes, according to two of the people familiar with the negotiations. 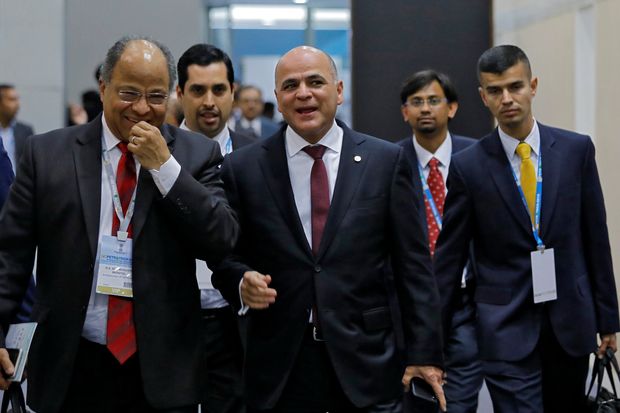 Venezuela’s Oil Minister Manuel Quevedo, center, in India on Monday, where his ministry said he was seeking buyers for Venezuelan oil. PHOTO:ANUSHREE FADNAVIS/REUTERS

Like China, Russia has publicly supported Mr. Maduro but has shown little willingness to prop up the government with fresh funds. Neither ally has granted large loans to Venezuela in recent years. Their joint oil ventures in Venezuela have been subject to the corruption and operational difficulties felt across the country’s oil industry, energy consultants said.

One director of a company that provides oil-field valves and tubes to Chinese and Russian state firms operating in Venezuela said the company had only made one sale in all of 2018. “The Chinese, the Russians, I just don’t see them putting any money in,” the director said.

Moscow is open to dialogue with Mr. Guaidó, Kremlin spokesman Dmitry Peskov suggested this month, saying Russia expected to maintain cooperation with Caracas “regardless of political developments in the country.”

The Trump administration’s sanctions aim to redirect oil assets and revenue away from Mr. Maduro and into the hands of Mr. Guaidó, closing off access to Venezuela’s biggest cash customers.

Venezuelan officials have been seeking new buyers for their heavy oil, which until January could be refined at specially fitted American installations.

On Sunday, the state-run Saudi tanker company, Bahri, said one of its vessels had traveled to Venezuela to load crude for one of Caracas’s regular customers in India. Bahri said the shipment would be completed before the end of a grace period set by U.S. sanctions.

On Monday, Venezuela Oil Minister Manuel Quevedo was in New Delhi, seeking to increase sales to India, his ministry said.

But Indian officials have said privately that they have grown impatient with Venezuela, which for several years has delayed repayment of nearly $500 million owed to state oil company ONGC Videsh Ltd.

Venezuela’s government has also fallen into arrears with Indian pharmaceutical companies that once thrived here, forcing many of them to shift operations out of the country as social and economic conditions deteriorated.

“Private entities in India have little reason to go out of their way to ramp up imports in such a chaotic situation,” said Smita Purushottam, a former Indian ambassador to Venezuela who recently retired from the Foreign Ministry.

“My view is that the people of Venezuela are fighting for survival,” she said. “They have suffered for too long and perhaps the only way forward is to start anew, under international supervision, to minimize their suffering and rekindle hope.”

By Kejal Vyas
WSJ
—Benoit Faucon in London, Charles Hutzler in Beijing and Ginette Gonzalez in Caracas contributed to this article.

We must have a clear mind of this CCP virus

Politics editor - 08/11/2017
0
On the first anniversary of his election, President Donald Trump touched down in the country he had most maligned during the 2016 campaign. And he was welcomed...

China calls for closer military ties with Britain as its warships visit London for...

World editor - 03/10/2017
0
The Chinese ambassador to Britain has called for closer military ties between Beijing and the UK in a world that is “far from being...

Xi Jinping: a true believer in a bankrupt totalitarian ideology

xi jinping editor - 27/07/2020
0
The Heavens will ruin the Chinese Communist Party (CCP). Floods have swamped large parts of southern and central China after the worst torrential rains in decades. 433 rivers into the Yangtze have overflowed and...

Business editor - 23/03/2017
0
The Chinese number two, Premier Li Keqiang, has arrived in Australia for a five-day visit that will include the annual bilateral talks between the...

US china editor - 24/07/2020
0
Secretary of State Pompeo delivers a speech on Communist China and the future of the free world. GOVERNOR WILSON: Well, thank you very much, Chris. Most...

Chinese Communist Party wants a war to prolong its life

Guo Wengui editor - 22/06/2019
0
Dear warrior friends! When you see this video (of procession in Pyongyang), think of the Cultural Revolution, think of Japan before the Second World War,...

Pollution editor - 22/05/2019
0
A chemical banned around the globe for the last 30 years has made an unfortunate resurgence. And all signs, in a new study, point...

Money editor - 07/06/2018
0
Police issue a warning, telling people to take a close look at the cash they're using. Green Bay Police in US say fake money is...

Money editor - 11/03/2017
0
Mattel Inc is doubling down to corner a bigger share of China's fragmented yet lucrative toy market, but the success of its efforts hinges...

US china editor - 16/05/2021
0
That is definitely true in China, from different classes of people. As long as you spent time in the Ministry of Public Security. Ministry...

CCP has covered up the eyes of the Chinese people, says former top US...

human rights editor - 12/10/2019
0
This administration has spoken to the truth in many ways that previous administrations haven’t done.  (Applause.)  For example, on China’s rule-breaking and authoritarianism; for...

US Travel Alert Level 4 Do Not Travel to China

News editor - 31/01/2020
0
Any foreign national who has traveled within China in the last 14 days will not be allowed to enter the United States, according to...