The carrier was released into open water from a shipyard in the port of Dalian, northeastern Liaoning province, on Wednesday morning as a bottle of champagne was popped and the national anthem played in the background.

The launch came three days after the 68th anniversary of the People’s Liberation Army Navy on Sunday, and against the backdrop of a rising China seeking to project its influence over the regional maritime security pattern.

The announcement of the launch on China’s official media sparked patriotic discussion in China’s online community.

“It’s a symbol of China’s technological power, industrial capability and overall strength,” an internet user wrote on Weibo, the country’s version of Twitter.

Another internet user referred to China’s humiliation in the late 19th century when it was defeated by the Japanese navy, expressing delight that “a great country like China has finally got its own big weapon”.

The ceremony to launch the Shandong was chaired by Fan Changlong, vice-chairman of the powerful Central Military Commission.

President Xi Jinping, who is the commission’s chairman and hence the country’s top military leader, was not present.

In battle to control sea and air, how do China’s aircraft carriers stack up against other nations?

The carrier, which had earlier been temporarily named the Type 001A, is China’s second after the Liaoning, a refitted former Soviet Union-made carrier that was put into commission in the PLA Navy in 2012.

It is slightly larger than the Liaoning, China’s first aircraft ­carrier, which was refurbished from the semi-completed Soviet carrier Varyag, which Beijing bought from a Ukrainian shipyard in 1998.

China started developing the Shandong in November 2013, and building it in the dock in March 2015.

Even though its layout is almost the same as the Liaoning, the Shandong features new equipment and a more advanced operational concept, including a bigger hangar to carry more J-15 fighter jets and more space on deck for helicopters and other aircraft. 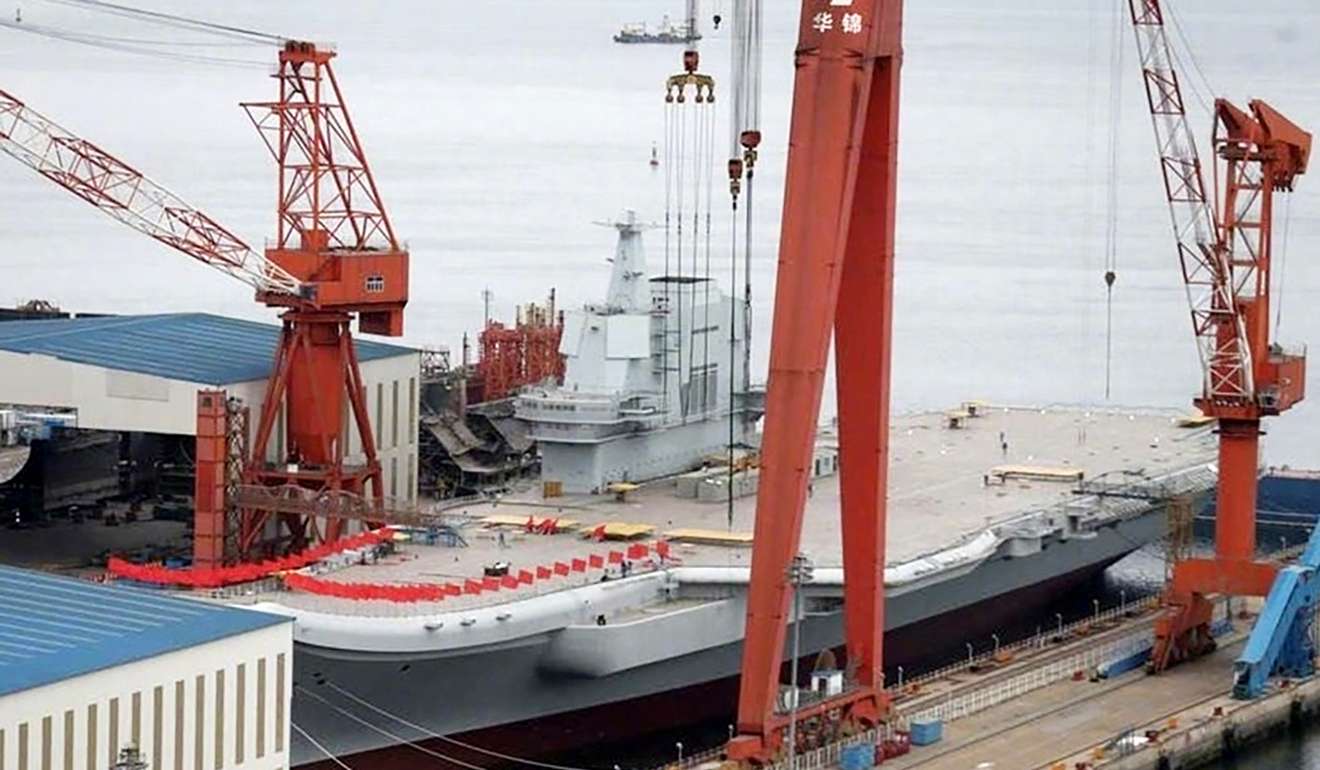 But military experts said the launch of the new carrier represented only modest progress of China’s military modernisation, given the huge technological gap between the PLA Navy and its most powerful rival in Asia-Pacific, the US Navy.

“While China is celebrating the launch of its first home-grown aircraft carrier, the country should also be mindful that the United States is possibly deploying its most advanced Ford-class supercarrier to the Asia-Pacific,” Beijing-based naval expert Li Jie said.

Can China leapfrog the US in the scramble for the world’s best aircraft carrier?

“The US is deliberately going to remind China that the generation gap between PLA navy and the US carrier strike groups as well as their fighting capabilities will be further enlarged when the carrier Gerald R. Ford is commissioned this year.”

The 100,000-tonne nuclear-powered US carrier is almost twice the size of the Type 001A carrier. The giant ship is powered by two advanced nuclear reactors, and equipped with electromagnetic aircraft launching system, even though its recovery device was changed to cable arresting gears for safety consideration. 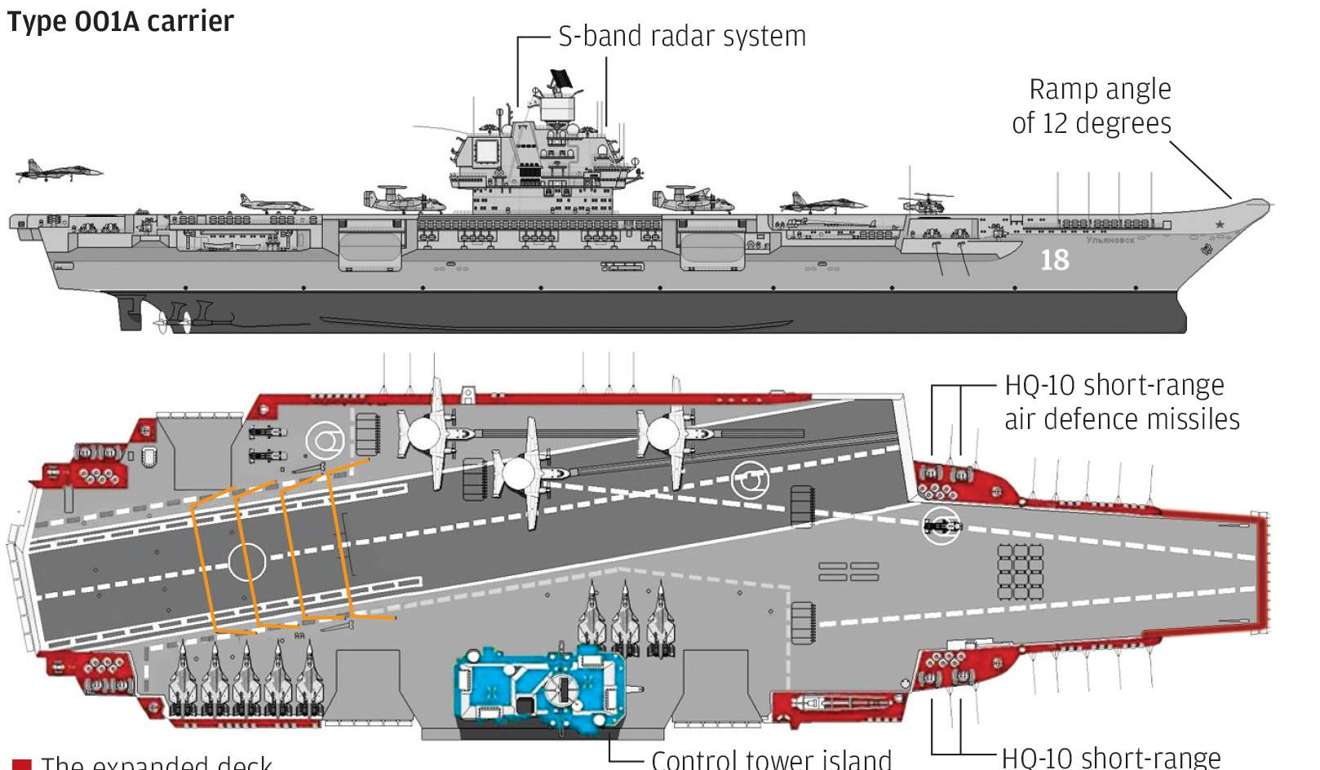 The conventional powered Type 001A retains the ski-jump take-off ramp of the Liaoning, and when China’s next generation aircraft carrier, the Type 002, is launched around 2021, it will not be nuclear-powered vessel with electromagnetic aircraft catapults, according to Li.

The Type 002 carrier would most likely retain standard steam-driven catapults because “it’s impossible to develop a completely new generation carrier in just a few years”, said Li, who published a book about the Ford-class carrier this month.

“To some extent, we should recognise that the technological gap in key aircraft carrier technologies between China and the US is widening, and there is no sign of it narrowing.”

The Ford-class carrier was launched in November 2013, and expected to be commissioned this year. But Washington has not announced where it will be stationed.

Business editor - 19/06/2017
0
Chinese state oil giants Sinopec and PetroChina are waging war at the nation's gas pumps, slashing prices at unprecedented rates in an effort to...

Chaos and bloodshed in Hong Kong as hundreds of masked men assault protesters and...

Declaration of the New Federal State of China

This generation of Chinese doesn’t deserve freedom, democracy and equal rights for individuals

Military editor - 16/02/2019
0
The majority of Chinese would like to see the US Trump Administration take down the notorious Great Firewall, demolish the military facilities and installations...

Politics editor - 28/12/2019
0
Editorial note: The spokesperson of the Ministry of Foreign Affairs tweeted today to counter western media against its human rights violations in Xinjiang and Hong...

Lifestyle editor - 08/06/2017
0
This week, students across China will sit the gaokao—”life’s most important test”—a two-day college entrance exam that can arguably make or break one’s chances...

Real Estate editor - 04/04/2017
0
A sleepy district in Hebei province has suddenly become the centre of China's latest property craze and the talk of the country. Over the weekend,...

Beijing is using underwater drones in the South China Sea to show off its...

Tech editor - 12/08/2017
0
The world's second-largest economy has been deploying disruptive technology that could strengthen its territorial ambitions in the South China Sea. Late last month, Beijing dropped a...

China is building 30 ‘sponge cities’ that aim to soak up floodwater and prevent...

Society editor - 12/11/2017
0
Like many places around the world, Chinese cities are considering ways to combat flooding in the face of climate change. Increased urban development has made flooding...

Social media editor - 29/07/2017
1
There are iPhone apps that make it possible to get around China's notorious Internet filters. And on Saturday, makers of those apps said Apple...

Real Estate editor - 08/08/2017
0
That whoosh you just heard? It's Chinese money pulling back from property in London to Sydney to New York. Capital centres globally should brace for tumbling...

Communist government of China behind the refinery attacks in Saudi Arabia

News editor - 16/09/2019
0
The communist government of China has been hinted as the “culprit” behind the drone attacks at refinery facilities in the oil-rich country of Saudi...

Western media is still wrong. China will continue to rise.

Society editor - 24/10/2017
0
As the 19th National Congress of the Communist Party of China draws to a close, analysts are parsing through President Xi Jinping’s 30,000-plus-word report...

Travel editor - 25/01/2021
0
As the different variants of COVID-19 continue to spread throughout the globe, more and more countries are retracting their fairly recent decision to permit...