Landing heats up competition with U.S. to become the first country in half a century to land astronauts on moon.

China successfully landed a probe on the far side of the moon, in the latest milestone for the country’s ambitious space program.

The Chang’e-4 touched down in the Von Kármán crater Thursday morning Beijing time, China’s state news agencies reported. Having landed intact, it will deploy a rover to gather samples that could provide insights into the moon’s internal composition.

More than just a technological achievement, the mission’s success is a publicity coup for President Xi Jinping, who has personally endorsed China’s space efforts, said Dean Cheng, an expert on China’s space capabilities at the Washington-based Heritage Foundation. “This is huge—a major first,” said Mr. Cheng. “For Xi Jinping and his great Chinese revival, this is a wonderful example.”

The landing makes China the first country to deploy a probe on the far side of the moon. To help achieve the feat, a communications-relay satellite called Magpie Bridge was positioned 50,000 miles beyond the moon last June to bounce transmissions between the Chang’e-4 and terrestrial ground stations.

The Chang’e-4 began its descent early on Thursday and then hovered 100 meters (328 feet) above the moon’s surface to enable its sensors to pick out the smoothest spot for landing before completing its approach, state media said. The craft was launched from southwest China last month, and took 4½ days to reach the moon. 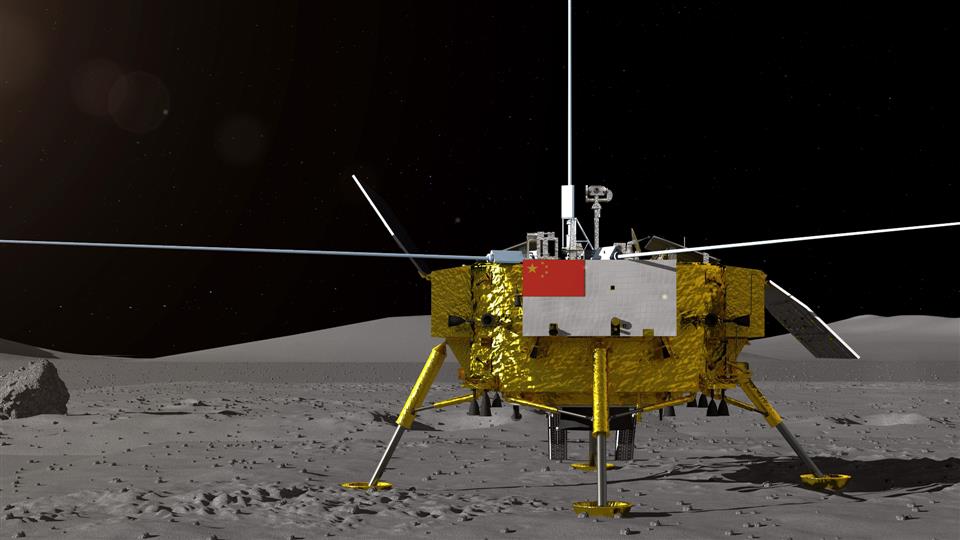 China Makes Historic Moon Landing, Boosting Rivalry With U.S.
China gained on the U.S. in the new space race by making the first-ever landing on the far side of the moon. What’s driving China’s ambitions and should the U.S. be nervous? The WSJ explains. Photo: CHINA NATIONAL SPACE ADMINISTRAT/SHUTTERSTOCK

The first two Chang’e missions studied the moon from orbit, while 2013’s Chang’e-3 was China’s first probe to reach the lunar surface. A follow-up mission, the Chang’e-5, will attempt to gather lunar samples and return them to Earth.

The U.S. and China both want to lead the world in a new age of space exploration. Here are some of the milestones the rivals are planning to achieve over the next 15 years 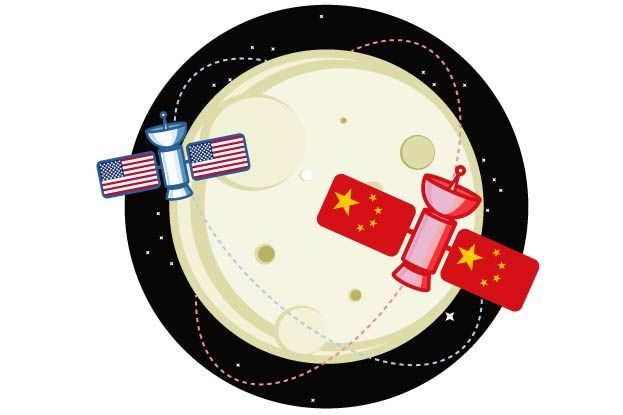 The mission’s success heats up the competition between China and the U.S. to become the first in half a century to land astronauts on the moon—and more broadly to claim leadership in space.

China aims to start building a lunar base by 2025 and to man the facility by 2030; in the long term it hopes to mine the moon for energy resources. The U.S. plans to return to the moon around 2023.

Both countries face daunting technical hurdles. China’s new super-heavy lift rocket, the Long March 5, failed during its maiden flight in 2017 and has yet to fly again, setting back the country’s mission schedule. NASA is still developing both the spacecraft and the rocket it will need to return American astronauts to the lunar surface.

As China methodically ticks off its objectives, the pressure is mounting for the U.S. to retain its crown as the world’s space pioneer, according to Mr. Cheng. “There are many who worry that the Chinese will put a man on the moon before we’re able to do it again,” he said. 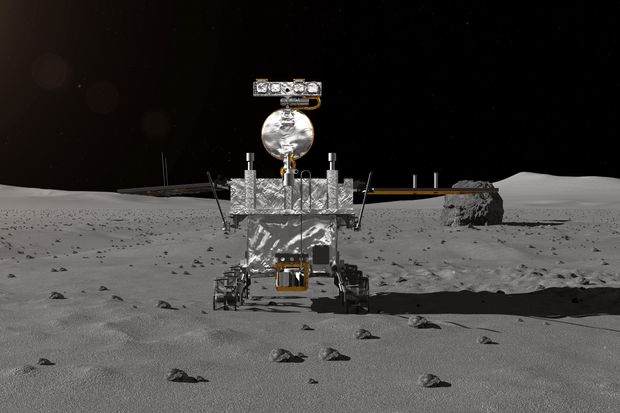 A photo from the China National Space Administration shows an artist’s impression of the rover for the Chang’e-4 lunar probe. PHOTO: CHINA NATIONAL SPACE

Society editor - 09/08/2017
0
A top international tourist resort was among the sites worst hit by a 7-magnitude earthquake that struck the Jiuzhaigou scenic area in China's Sichuan...

CPDC Briefs on the present and growing danger from Communist China

Guo Wengui editor - 30/03/2019
0
From March 8 to yesterday, totally 21 days, I have stayed at home mourning for my mother according to Chinese tradition and Buddhist practice....

The Billionaire Gadfly in Exile Who Stared Down Beijing

corruption editor - 30/05/2017
0
The biggest political story in China this year isn’t in Beijing. It isn’t even in China. It’s centered at a $68 million apartment overlooking...

Lifestyle editor - 07/02/2017
0
By April Ma Parents of gaming-addicted adolescents soon should be assured that their children will not be playing compulsively into the wee hours of the...

Business editor - 13/05/2017
0
Beijing: Globalisation is the word on the street as China's capital prepares for President Xi Jinping's much-hyped trade summit of 29 world leaders, to...

World editor - 14/12/2018
0
Today the Associated Press carries an article by Rob Gillies and Paul Wiseman entitled “Canada is caught between China and U.S., and feeling alone”. This...

human rights editor - 30/10/2019
0
Australia has joined with 22 other nations to condemn the mass ­detention and surveillance of ­Uighurs in China’s Xinjiang province, urging Beijing to end...

Guo Wengui and Steve Bannon put forth five guidelines for the protests in Hong...

This North Korea Thing Has Major Implications for Hyundai

Business editor - 05/09/2017
0
Hyundai Motor Co. is squabbling with its Chinese partner, BAIC Motor, over efforts to reduce supplier costs. The automaker has already faced a myriad...

Solution to Australian exports: stop the bully by taking down the CCP regime

chinese government editor - 13/05/2020
0
China made the announcement that it was suspending imports from four Australian abattoirs. The move followed an anti-dumping investigation on Monday which could see...

Money editor - 05/02/2018
0
China will reportedly block anyone in the country from accessing websites that offer cryptocurrency trading services or initial coin offerings (ICOs). Advertisements relating to...

Why China Is So Confident