An ongoing trade feud between two of the world’s most powerful countries has ramped up even further, with China announcing higher tariffs on the United States.

The Chinese government said it would impose retaliatory tariffs on $US60 billion ($AU86.4 billion) worth of American goods, causing the US stock market to fall considerably overnight.

This signifies that the trade war between these two economic powerhouses is real.

And it’s getting ugly, with US President Donald Trump threatening a further (AUD) $467 billion in tariffs on Chinese products.

The ASX was rocked by the latest escalation, with shares plummeting at the opening.

The market was down 1.4% on early trading, just hours after Beijing announced the tariff increase on US goods.

The losses were worst in the financial sector.

European stock markets were also hit by the new tariffs, with the pan-European STOXX 600 index dropping 1.2%.

“Furthermore, as there isn’t a clear schedule for meetings between Chinese and US negotiators, markets are likely to be more volatile, especially in the absence of any substantive information not written in a tweet.”

Share markets around the world have been rocked by the latest escalation of the trade war between China and the US.Source:Supplied

WHAT’S UP WITH CHINA AND THE US?

China and the US have continued to fuel their trade war by imposing another round of tariffs on one another.

Real quick — a tariff is essentially a fee attached to an imported good. It is typically charged as a percentage of the transaction price that a buyer pays a foreign seller.

Tariffs are used to protect domestic industries from foreign competition, but can also punish foreign countries for dumping their goods at unfairly low prices. The latter was the rationale behind Mr Trump imposing additional tariffs on steel and aluminium imports from China last year. 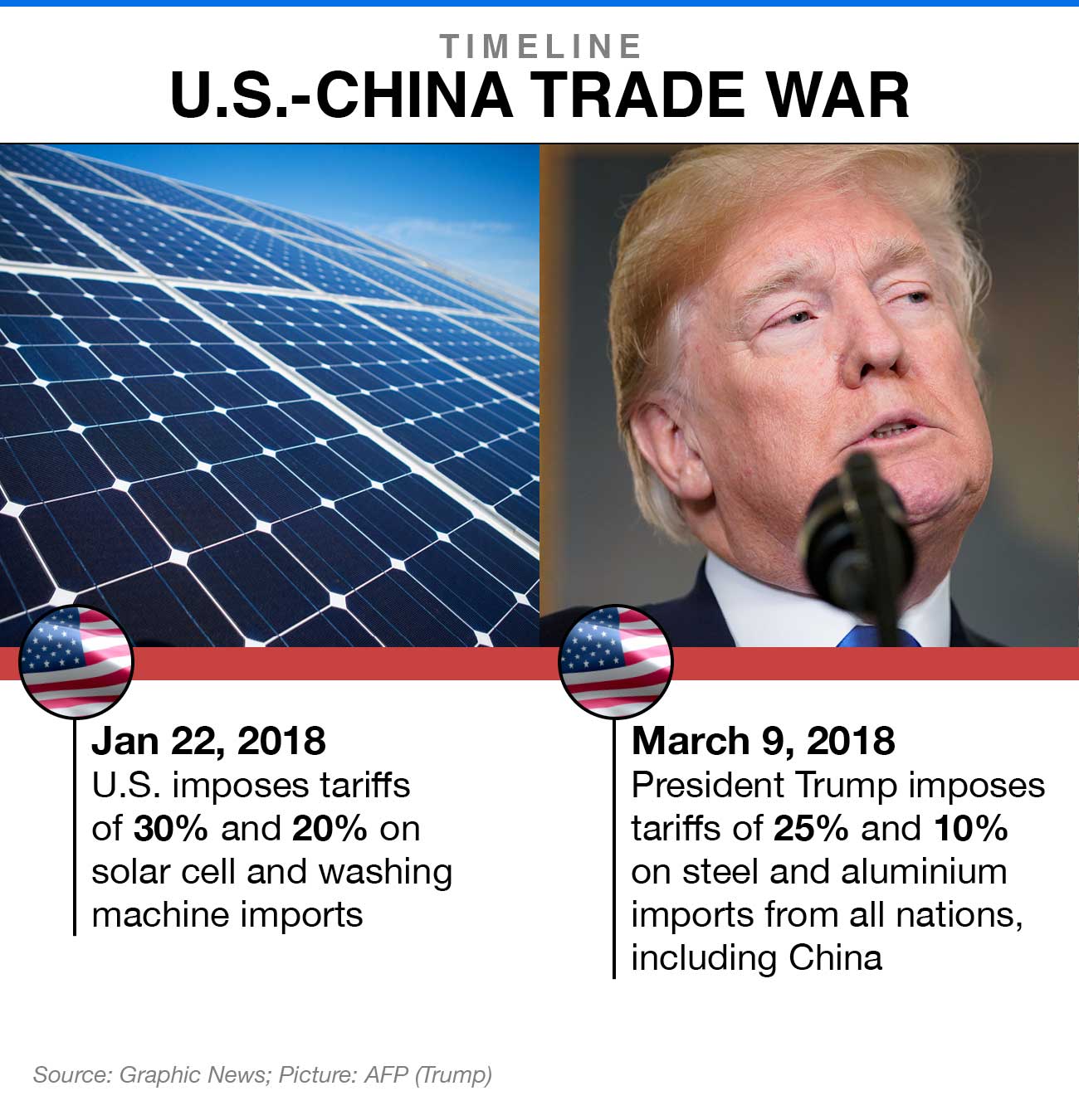 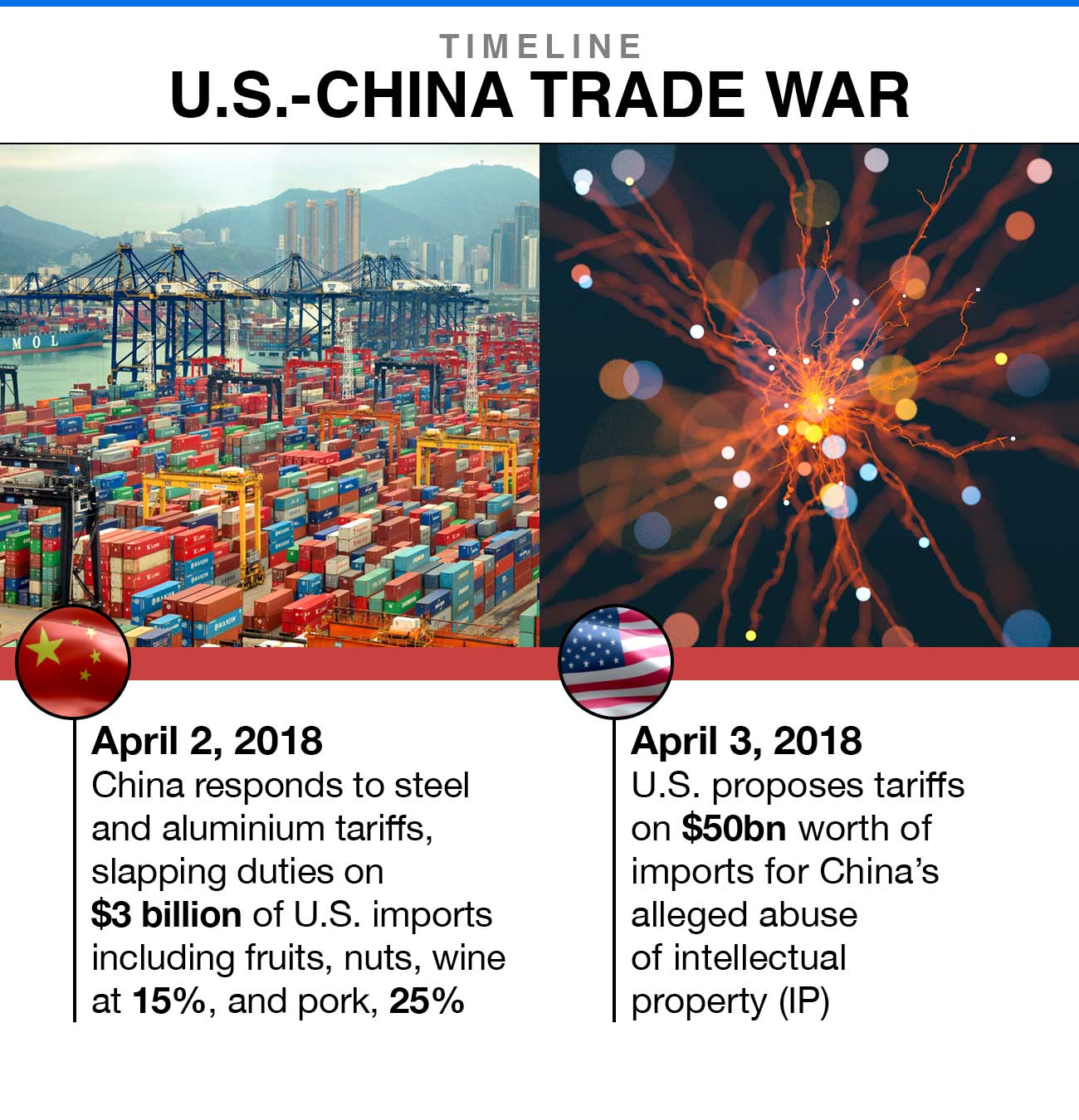 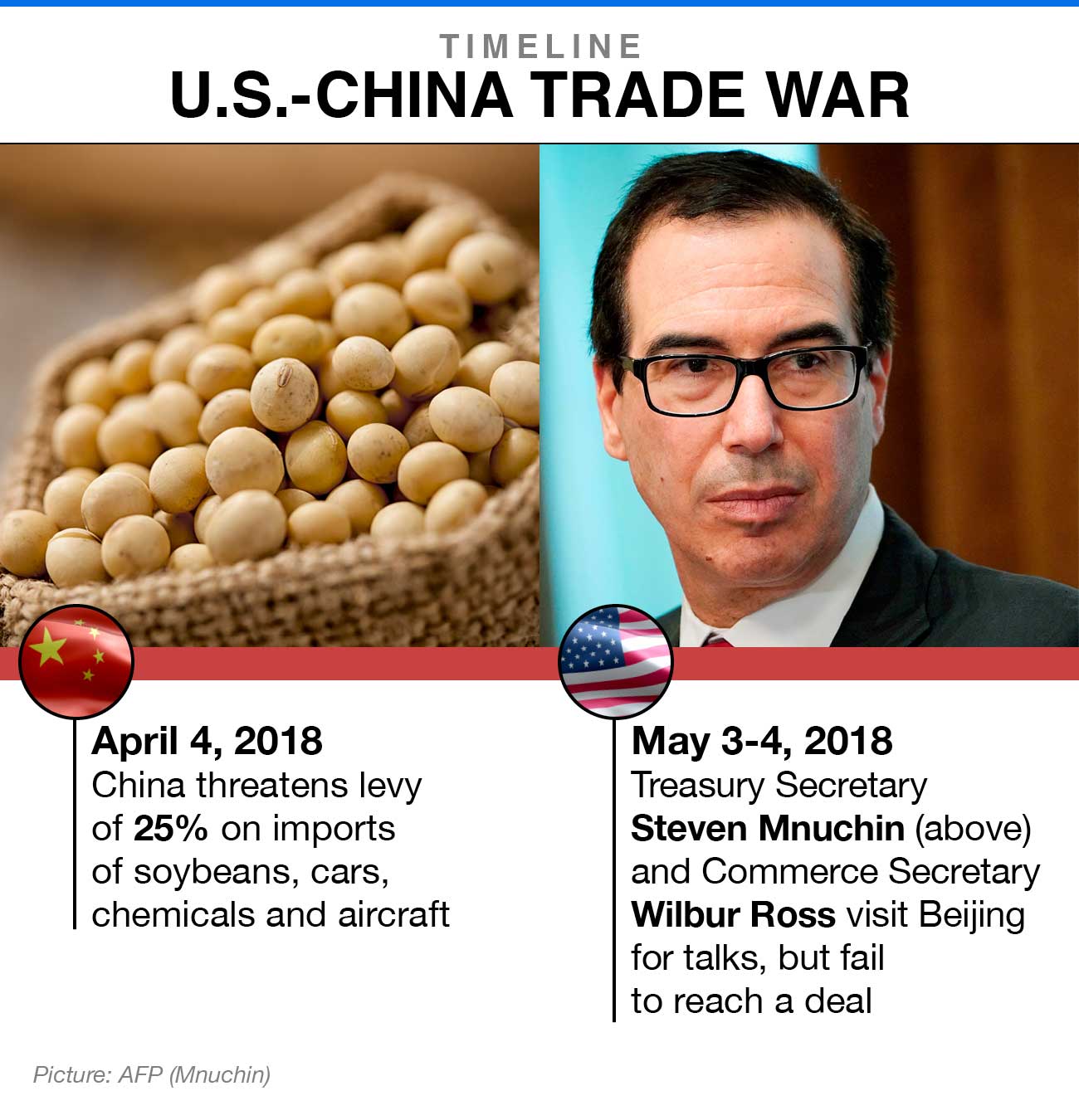 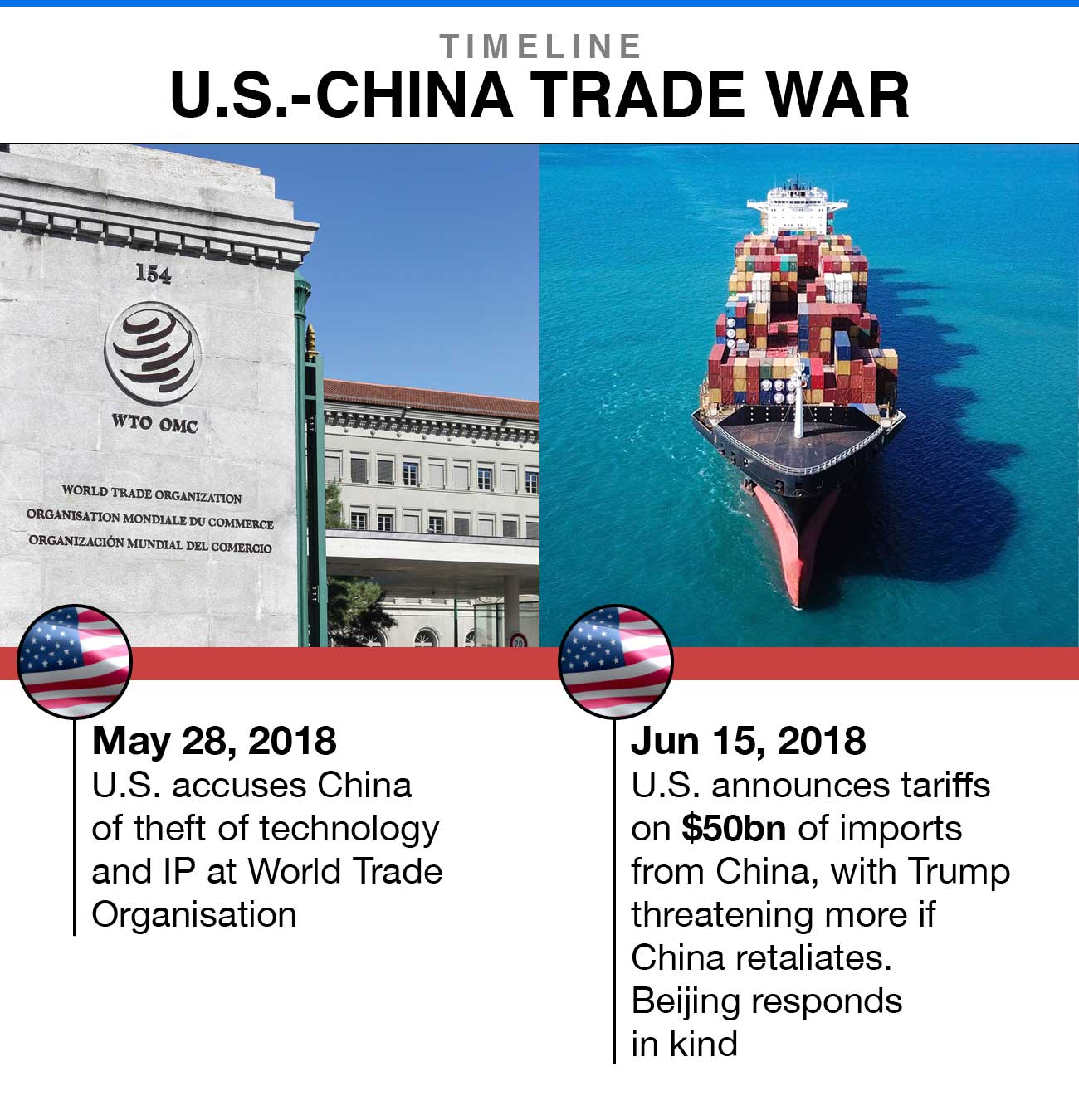 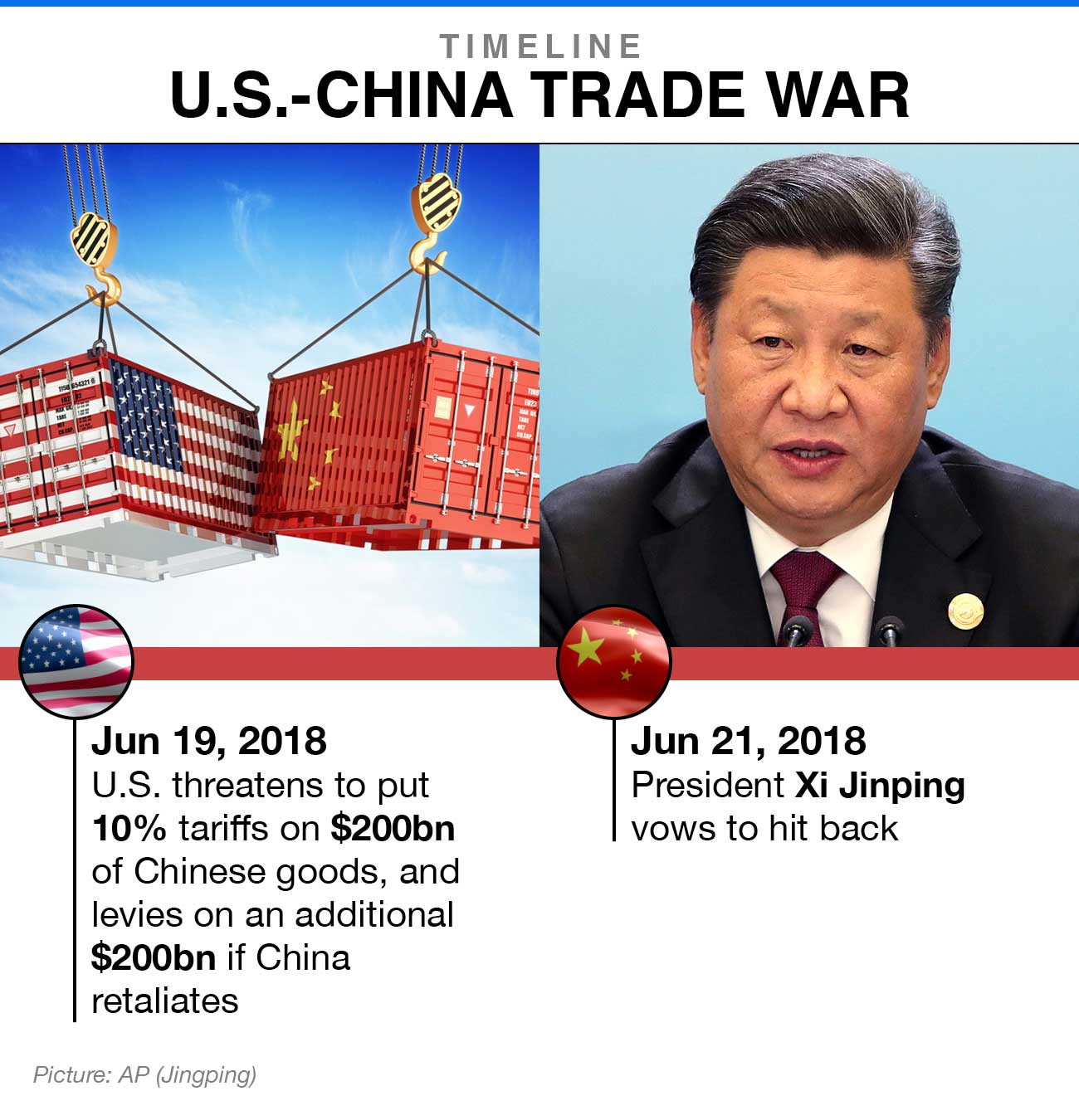 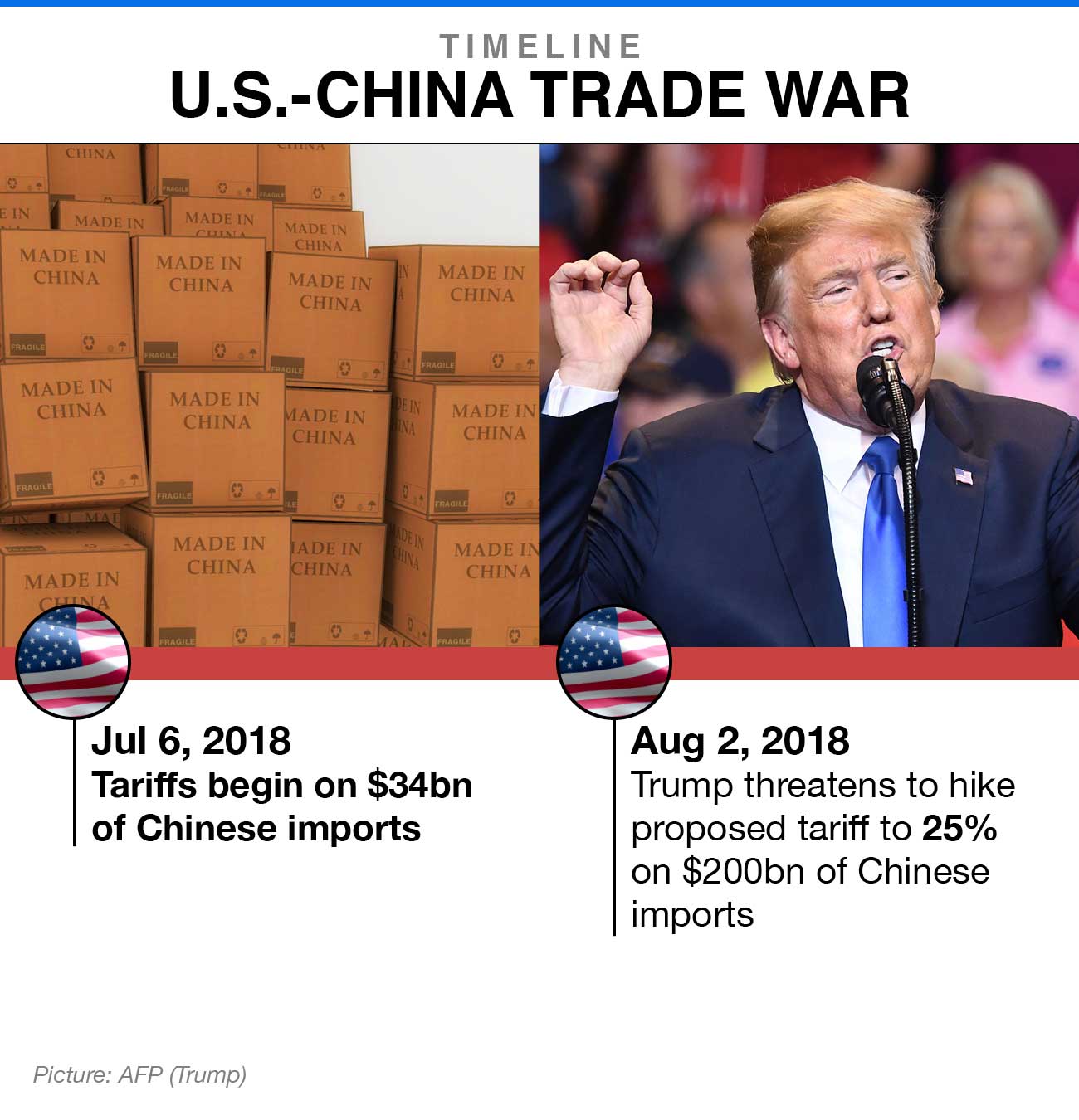 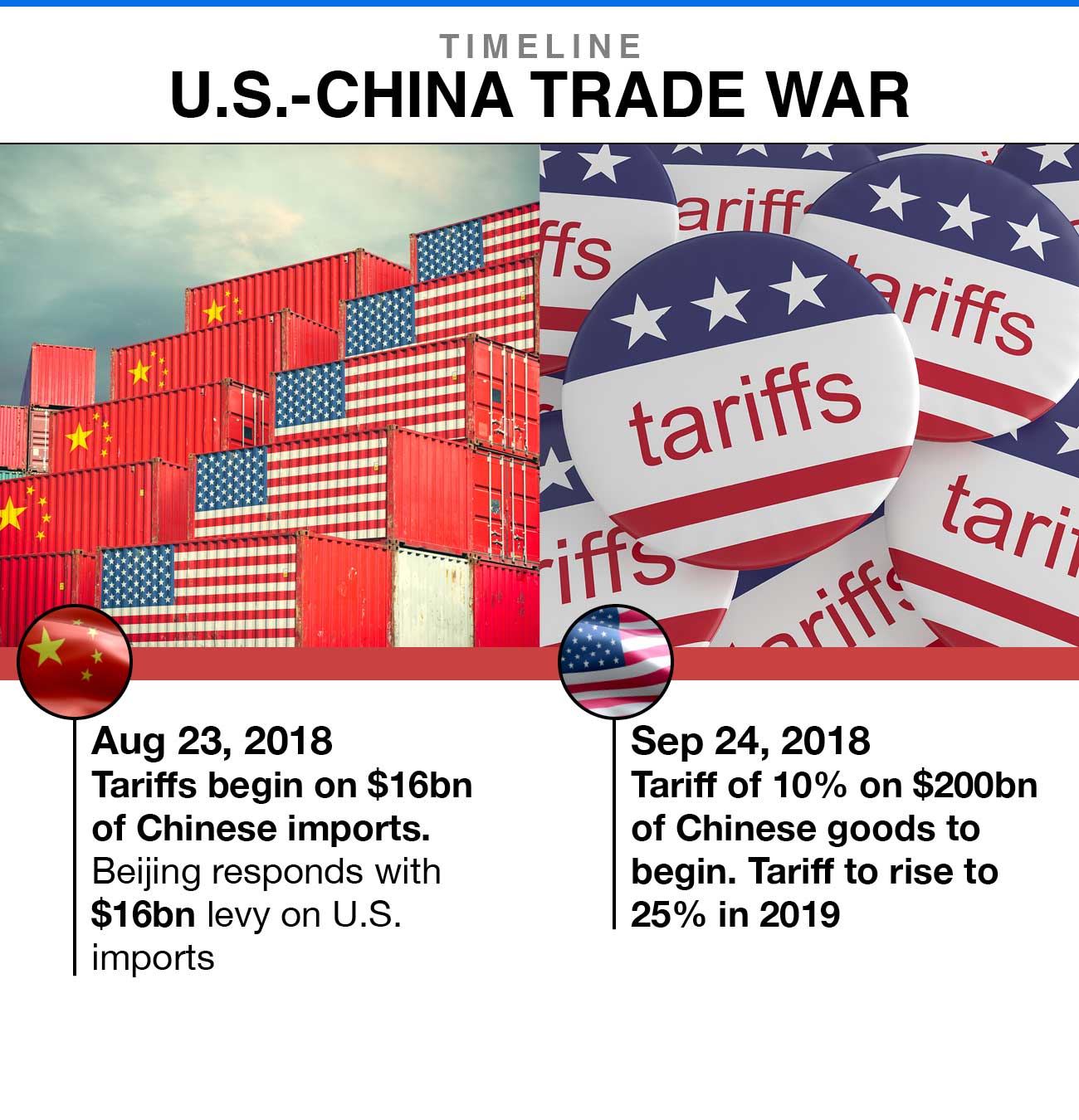 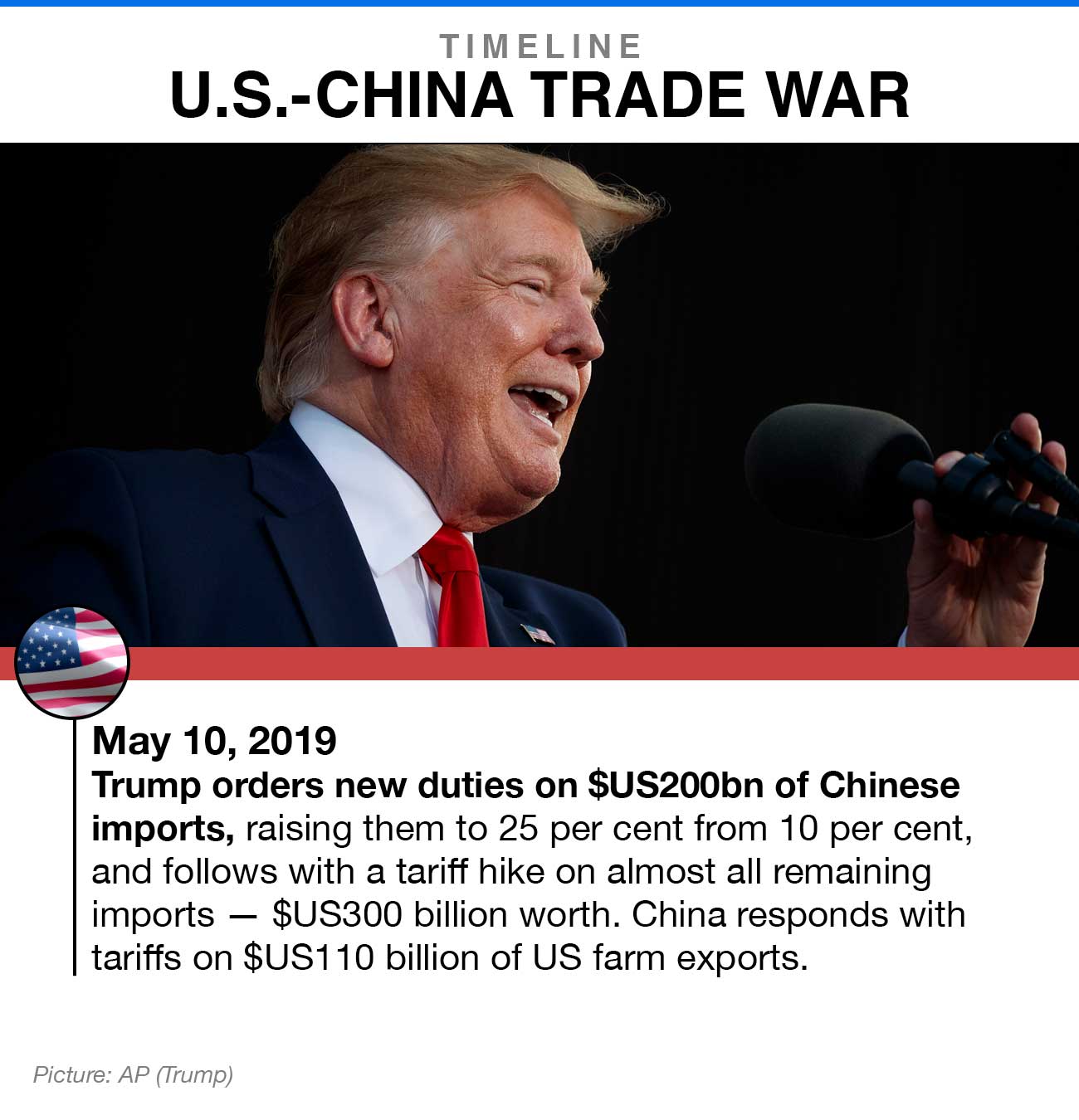 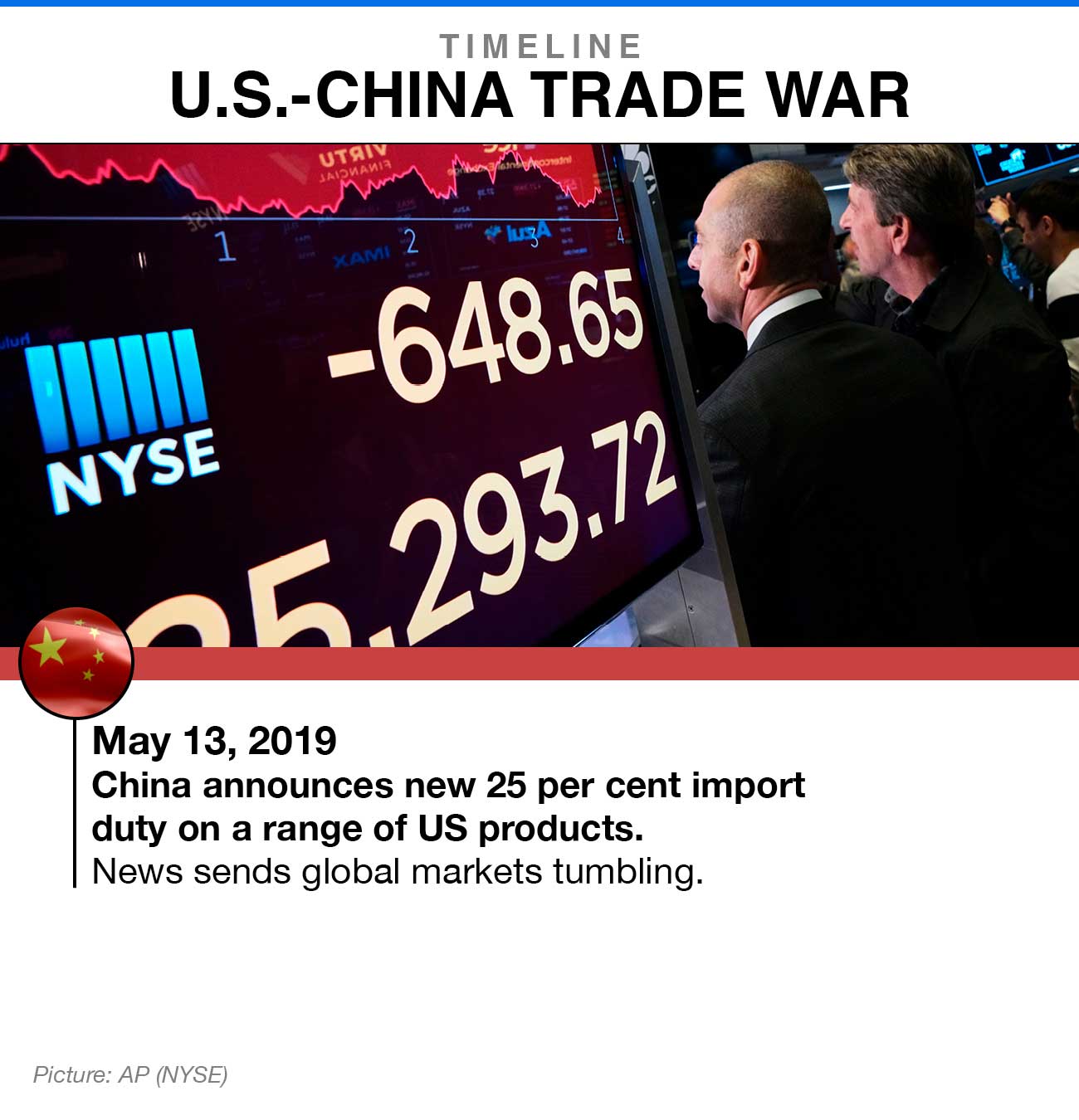 But why is this heating up again?

On Friday, the US announced it would raise tariffs on $200 billion worth of Chinese imports — from 10 per cent to 25 per cent.

The US justified this decision by accusing China of backtracking on commitments made in earlier negotiations.

The Trump administration is hoping that fewer Americans will buy China’s products in favour of domestic goods, which would see foreign companies leave that market and head elsewhere.

“Many tariffed companies will be leaving China for Vietnam and other such countries in Asia. That’s why China wants to make a deal so badly!” Mr Trump tweeted yesterday.

On Friday, the US announced it would raise tariffs on $200 billion worth of Chinese imports — from 10 per cent to 25 per cent.Source:AFP

China has now responded by raising tariffs on $60 billion worth of American goods, with tariffs increased from 5 to 25 per cent taking effect on June 1 this year, on over 5000 American products, including batteries, spinach and coffee.

You only need to look to the latest stock market figures to see its impact. Stocks have sunk across the globe.

The Dow Jones industrial average was down more than 600 points by midafternoon, while the Standard & Poor’s 500 also sank nearly 2.5 per cent.

The Dow Jones has been rocked by the trade war.Source:Supplied

The higher Chinese tariffs will kick in in two weeks. The US increases apply to Chinese goods shipped since Friday, which will take about three weeks to arrive at US seaports and become subject to the higher charges.

On Twitter, Mr Trump warned Chinese President Xi Jinping that China “will be hurt very badly” if it doesn’t agree to a trade deal.

Donald J. Trump tweeted, “I say openly to President Xi & all of my many friends in China that China will be hurt very badly if you don’t make a deal because companies will be forced to leave China for other countries. Too expensive to buy in China. You had a great deal, almost completed, & you backed out!”

WHO WILL THE TARIFFS HURT?

Donald Trump has insisted that the hard line tariffs will force China to pay money to the US Treasury.

He has repeatedly said, most recently on Monday, that increased tariffs on Chinese goods don’t hurt American consumers.

Donald J. Trump tweeted again, “Talks with China continue in a very congenial manner – there is absolutely no need to rush – as Tariffs are NOW being paid to the United States by China of 25% on 250 Billion Dollars worth of goods & products. These massive payments go directly to the Treasury of the U.S….”

But this is untrue. Tariffs are paid for, not by a country’s government, but by the company bringing in the goods.

These tariffs, in other words, are a tax on Americans, as opposed to “paid to the United States by China”.

Larry Kudlow, head of the President’s National Economic Council, acknowledged over the weekend that US consumers and businesses will bear some of the costs.

“Both sides will pay,” he told Fox News.

In the US, prices of soybeans, targeted by Chinese tariffs last year, fell on Monday to a 10-year low based on fears of a protracted trade war.

In a statement, American Soybean Association President Davie Stevens, a soybean farmer from Clinton in Kentucky, expressed frustration that “the US has been at the table with China 11 times now and still has not closed the deal”.

“What that means for soybean growers is that we’re losing,” he said. “Losing a valuable market, losing stable pricing, losing an opportunity to support our families and our communities.”

Mr Trump told reporters that a new program to relieve US farmers’ pain was “being devised right now” and predicted that they would be “very happy”. The administration last year handed farmers aid worth $11 billion to offset losses from trade conflicts.

The highest tariffs announced by China will apply to industrial chemicals, electronic equipment, precision machinery and hundreds of food products.

Beijing is running out of US imports to penalise because of the lopsided trade balance between the world’s two largest economies.

Chinese regulators have instead targeted American companies in China by slowing down the clearing of shipments through customs and the processing of business licenses.

The new tariffs are likely to hurt exporters on both sides. The increases already in place have disrupted trade in such American products as soybeans and medical equipment and sent shockwaves through other Asian economies that supply Chinese factories.

Mr Trump’s administration has threatened to slap tariffs on allof China’s remaining imports — $325 billion (AUD $467.28) worth in total. A public hearing will be held on the possibility of the raise next month.

Mobile phones and laptops would be included in that list, but pharmaceuticals would be excluded.

China’s state media has attempted to reassure businesses and consumers that the ruling Communist Party has the means to respond.

“There is nothing to be afraid of,” said the party newspaper People’s Daily. “The US-instigated trade war against China is just a hurdle in China’s development process. It is no big deal.”

Mr Trump has indicated he expects to meet Mr Xi in late June at the G-20 summit in Osaka, Japan.

“Maybe something will happen,” he said in remarks at the White House overnight. “We’re going to be meeting, as you know, at the G20 in Japan and that’ll be, I think, probably a very fruitful meeting.”

Beijing said on Monday it would “never surrender” to external pressure, and its state media kept up a steady drum beat of strongly-worded commentary, reiterating that the door to talks was always open, but vowing that China would defend its national interests and dignity.

Mr Trump has said he is in “no rush” to finalise a deal with China. He again defended the move to hike US tariffs and said there was no reason why American consumers would pay the costs.

Economists and industry consultants, however, maintain that it is US businesses that will pay the costs and it was likely they’d pass them on to consumers.

What is the US preparing to surround Communist China?

U.S. Position on Maritime Claims in the South China Sea

US china editor - 13/07/2020
0
The United States champions a free and open Indo-Pacific. Today we are strengthening U.S. policy in a vital, contentious part of that region —...

Business editor - 23/06/2017
0
China’s banking regulator is conducting a sweeping check on the borrowings of some of the country’s top overseas deal makers, according to people with...

Guo Wengui editor - 09/06/2017
0
Three top managers are facing charges of obtaining a loan by deception from Agricultural Bank of China. Three executives of the flagship company of fugitive...

World editor - 22/09/2017
0
Attorney General George Brandis is planning a once-in-a-generation shake-up of the legal framework governing who can lawfully influence Australian politicians, amid fears of clandestine...

A just cause attracts much support; an unjust one finds little

Somebody had to take China on, says Donald Trump

US to declare China among worst human trafficking offenders – officials

Politics editor - 27/06/2017
0
The Trump administration is poised to declare China among the world’s worst offenders on human trafficking, US officials said Monday, putting the world’s most...

Millions of Chinese mourn for the death of Miles Kwok’s mother who passed away...

Guo Wengui editor - 09/03/2019
0
On Twitter, Youtube and other social media, millions of Chinese are sending condolences to Miles Kwok and his family, expressing their grief over the...

Religion editor - 23/07/2017
0
Church leaders asked to ensure the 'Sinicisation of religion'. The Chinese Communist Party’s top leader in charge of religion has made it clear that Beijing...

Chinese Domestic Roaming Fees to Be Abolished by Year-End

World editor - 02/02/2021
0
China said on Monday it had “noted” the military coup in Myanmar and hoped that all sides could properly manage their differences under the...

corruption editor - 02/05/2017
0
A Sydney resident being hunted by the Chinese government for alleged corruption has an Australian wife and child, and fears the case against him...

Solution to Australian exports: stop the bully by taking down the CCP regime

chinese government editor - 13/05/2020
0
China made the announcement that it was suspending imports from four Australian abattoirs. The move followed an anti-dumping investigation on Monday which could see...

Travel editor - 05/10/2017
0
A week-long national holiday in China is providing a much-needed boost for the entertainment and retail industry in London, with Chinese tourists taking advantage...

News editor - 22/09/2020
0
Remarks by President Trump to the 75th Session of the United Nations General Assembly PRESIDENT TRUMP: It is my profound honor to address the United...