In China, legions of delivery personnel power the world’s largest e-commerce boom. Known for their careening three-wheeled carts, they terrorize pedestrians and sometimes dump their packages on doorsteps and desks with the delicacy of a restaurant employee tossing out yesterday’s leftovers.

Then there is Tang Hongliang, who is part of an ambitious effort to bring some sparkle to the business — and perhaps help revive the fortunes of the world’s makers of high-priced handbags and watches.

Decked out in a black suit, dark gray tie and white gloves, Mr. Tang does not look like a typical Chinese package courier. Instead of piping hot noodle lunches, he delivers a $2,400 designer handbag. Rather than a three-wheeler, he drives an electric car to transport expensive cargo. In the time he makes one or two deliveries, the typical Chinese courier would have made about 150. 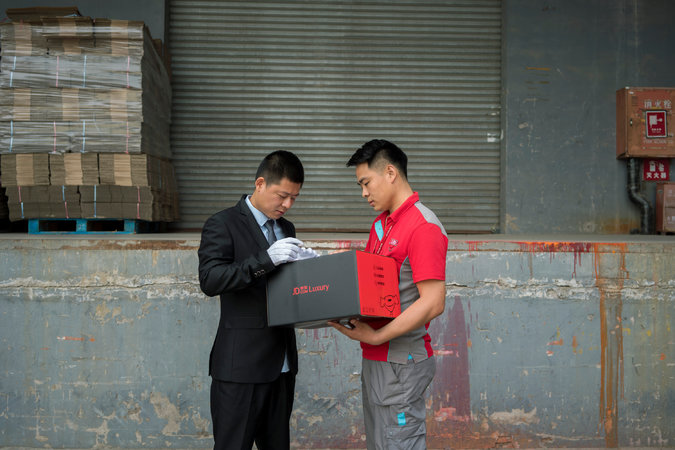 Tang Hongliang, a driver for the JD.com luxury service, picking up a package from a warehouse employee.CreditGiulia Marchi for The New York Times 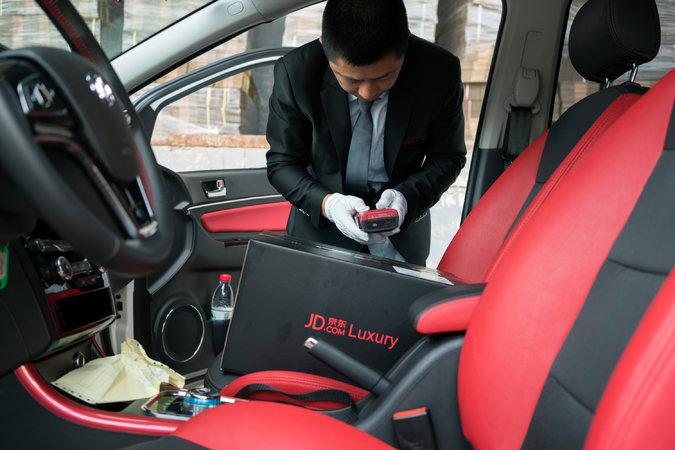 Mr. Tang getting ready to start the workday. CreditGiulia Marchi for The New York Times

“Efficiency is of course important,” said Mr. Tang, who works for the online retailer JD.com. “But serving the customer is the most important.”

Facing slowing sales, global luxury brands are angling for a piece of China’s e-commerce market, where people are accustomed to buying gadgets and groceries, but not high-priced jewelry and haute couture. Many are unsure, however, about diving headfirst into online retail, because China’s favorite way to shop is also an industry better known for piracy and dusty deliverymen than for shine and polish.

To court the luxury market, companies like Alibaba and JD.com are using their vast customer base to offer upscale retailers support on issues like digital marketing, pricing, customer services and, in the case of Mr. Tang, delivery.

“The most difficult thing to overcome is the experience for the shoppers,” said Xia Ding, president of JD.com’s fashion division. “But because we own the logistics we are really able to deliver luxury goods in a way that makes shoppers feel like they are getting the same special experience as they get offline.”

Chinese shoppers have long dominated the global luxury market. In the last two years, a continuing anticorruption campaign and an economic slowdown led to a decline in Chinese demand for luxury, contributing to an overall global slump. Still, last year Chinese shoppers accounted for 30 percent of global luxury purchases, according to a report by Bain & Company.

Until recently, however, many Chinese luxury purchases were being made overseas or through daigou — personal shoppers who buy goods abroad and bring them into China, avoiding the country’s hefty taxes. That started to change two years ago when, in an effort to combat gray-market sales, a number of high-end luxury brands led by Chanel took steps to reduce the price gap between goods in China and overseas.

At about the same time, the Chinese government also stepped up efforts to crack down on daigou shoppers, increasing checks at airports and lowering duties on some luxury goods imported through official channels.

As a result, brands have seen a shift in luxury shopping habits, with more and more Chinese consumers now choosing to buy at home rather than abroad. This so-called reshoring has caught the attention of Chinese e-commerce companies, causing major players like Alibaba and JD.com, as well as smaller luxury-focused companies like Secoo and Xiu, to invest aggressively in the luxury sphere.

“Mass market brands already know that there is no choice but to be on these e-commerce platforms,” said Liz Flora of L2, a market research company based in New York. “So luxury is really the next frontier for these e-tailers. You can see the competition getting more and more fierce.” 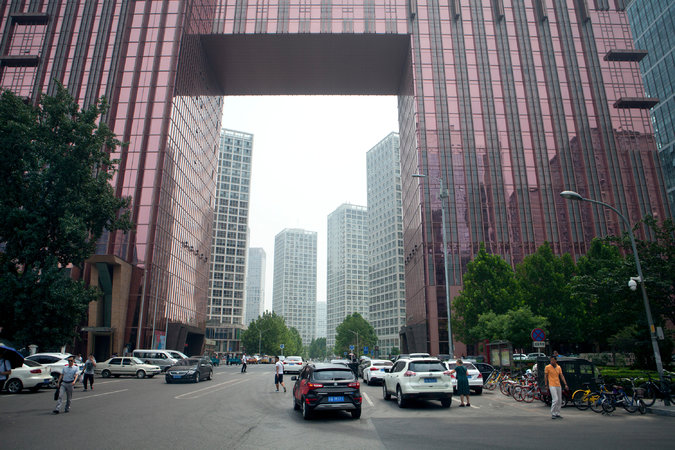 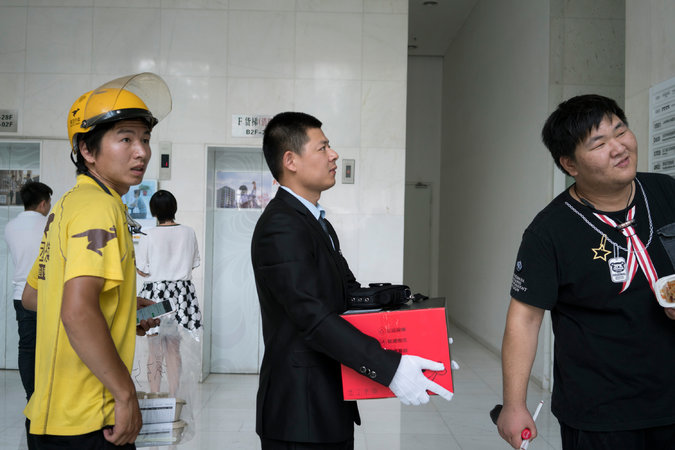 In addition to starting the white-glove delivery service, JD.com announced a deal last month to invest $397 million in the luxury e-commerce platform Farfetch, which is based in London. Both Alibaba and JD.com are considering rolling out separate platforms focused exclusively on luxury in the coming months, executives from the companies said in interviews.

But so far, China’s e-commerce companies have struggled to persuade top international luxury brands to sell on their platforms. Luxury companies have long been concerned that with e-commerce, it would be impossible to replicate the gilded, perfectly curated in-store shopping experience. Brands also worry about their products being sold next to counterfeit and gray-market items — an issue that Alibaba in particular has struggled with in the past.

Still, there is no ignoring the reality that Chinese consumers love shopping online. Chinese shoppers spent $758 billion online last year — more than the United States and Britain combined, according to official data, buying everything from toilet paper to luxury cars.

“The brands are finally starting to intellectualize the fact that to succeed in China, they need to go online,” said Alexis Bonhomme, co-founder of CuriosityChina, a Beijing-based digital marketing and tech company that works with luxury brands. “The bottom line is they need new revenue channels and e-commerce is a real revenue channel.”

Some brands have already made the leap. Burberry in particular has led the push into e-commerce in China, opening a flagship store on Alibaba’s Tmall platform. Others, like the Hong Kong jeweler Chow Tai Fook and the Swiss watch brand Tag Heuer, have stores on JD.com.

To appeal to brands, e-commerce companies offer to increase efforts to crack down on counterfeits.

“One of our goals was to clean up the e-commerce market so we could ensure that anyone who bought online was buying a real Tag Heuer,” said Leo Poon, general manager of Tag Heuer in greater China. “So far it’s been working and we’re seeing sales picking up.”

But for more high-end luxury brands, increasing the anti-counterfeit effort is not enough.

“Luxury brands are control freaks,” Mr. Bonhomme of CuriosityChina said. “They want complete control over everything.”

For now, some luxury brands are opting to create their own e-commerce websites to sell directly to consumers. Many, like Cartier and Bulgari, have also begun partnerships with Tencent’s popular WeChat mobile messaging service to create online stores, flash sales, and marketing campaigns featuring major Chinese influencers.

Ultimately, e-commerce giants like Alibaba and JD.com are hoping that the allure of their vast consumer base will be too difficult for luxury brands to resist. Shiny add-on features like the white-glove delivery service may make swallowing the e-commerce pill a little easier for the brands.

On a recent morning, Mr. Tang, the courier, pulled out of a JD.com warehouse on the outskirts of Beijing with a single delivery box in tow. Three-wheeled delivery carts whizzed past as he drove calmly toward the city’s central business district.

After waiting for the customer for nearly two hours, Mr. Tang stepped out of the car, pulled on his signature gloves and headed out to deliver the package.

“Wow, I wasn’t expecting this service at all,” Yan Luxia, 30, said as she received the box and took out a designer Italian leather handbag.

Ms. Yan, who manages a dating service in Beijing, later said the premium delivery service had been a very “satisfying” experience.

“But to be honest,” she added, “consumers care more about the authenticity of the product.”

Coronavirus justifies a fresh take on Apple production outside China

Chinese economy is collapsing with coronavirus; the world is also suffering

Society editor - November 28, 2018
0
The phrase that Miles Kwok tells most in this talks with US institutions in the past two days is the Russian proverb former US...

Why is Asia demanding so much baby formula?

Guo Wengui editor - August 5, 2019
1
From the video we just played, you have learned about the protests of Hong Kong civil servants. Some people said 120 thousand people have...

chinese movie editor - June 14, 2017
0
Citizens on Chinese social networking site Sina Weibo are fighting back after the platform took down a post making unverified allegations of sexual abuse and corruption at the...

Somebody had to take on China, I am the chosen one, says Donald Trump

News editor - August 22, 2019
0
Strolling towards a group of reporters waiting at the back garden driveway of the White House on Wednesday ahead of his departure for a...

Social media editor - June 9, 2017
0
CHINESE media are not known for stirring up trouble. Their coverage of politics is almost uniformly tame. Business coverage is sometimes harder-hitting, but journalists...

xinjiang editor - December 4, 2019
0
The US House of Representatives has overwhelmingly approved a bill that would require the Trump administration to toughen its response to China's crackdown on...

Guo Wengui editor - November 16, 2019
0
Dear warrior friends! Today is October 16 and I am having a live broadcast for peace. Before I go into the developments in Hong Kong,...

Politics editor - September 9, 2017
0
China’s military is preparing a sweeping leadership reshuffle, dropping top generals, including two that sources say are under investigation for corruption. The changes would make...

World editor - May 22, 2018
0
China rebuffed U.S. concerns about its ties with Venezuela on Tuesday after Washington imposed new sanctions on the crisis-stricken oil-producing country following the re-election...

Politics editor - January 26, 2018
0
Official media has been in overdrive this week praising Xi's 2017 Davos speech and contrasting the PRC's vision for the world with President Trump's. Buzz: The propaganda onslaught...

World editor - November 17, 2018
0
The trade war, the economic war, the confrontation in South China Sea and possibly an exchange of gunfire across the Taiwan Strait ... This...

No fizzy drinks: Chinese army tells recruits to shape up

Society editor - August 25, 2017
0
The Chinese military has come up with some advice for would-be recruits on how to pass physical tests, sparking amusement among social media users. In...

China all quiet on its military spending front

Politics editor - March 6, 2017
0
Beijing breaks precedent by not revealing the total budget to take some of the sting out of the sensitive figure at home and abroad,...

human rights editor - October 30, 2019
0
Australia has joined with 22 other nations to condemn the mass ­detention and surveillance of ­Uighurs in China’s Xinjiang province, urging Beijing to end...

Religion editor - December 20, 2019
0
Editorial Note: The Chinese government plans to appoint its own Dalai Lama once the current one—who’s now in his 80s—eventually passes away. But a...

The CCP would rather starve the Chinese to death for diplomatic success to keep...

Society editor - June 13, 2017
0
In China, it is legal to eat cats and dogs. Even so, ordinary people reacted with alarm this week as news broke of a...