When China hatched the first of a series of oil-for-loans agreements with Venezuela in 2007, it seemed like a perfect match. Venezuela had the world’s biggest oil reserves; China was poised to become the biggest energy consumer.

Twelve years and more than $50 billion in loans later, a political crisis in Venezuela is threatening China’s payout and drawing Beijing into a proxy standoff as it supports a Venezuelan leader the U.S. is intent on toppling. It is a conflict with Washington that Beijing could do without, amid efforts to resolve a trade dispute that is weighing on the Chinese economy.

In public, China has joined Russia in standing by Venezuelan President Nicolás Maduro, after the U.S. and several other nations recognized opposition leader Juan Guaidó as the country’s head of state in January.

At a Lunar New Year reception last week at the Gran Melia Hotel in Caracas, the Venezuelan capital, Chinese Ambassador Li Baorong said Beijing was opposed to “hegemonism and interventionism.”

He congratulated Mr. Maduro on his new term in office, offering to “exchange views on governance more closely.”

Behind the scenes, though, there is deep concern in Beijing about why its Venezuelan venture backfired and how it can salvage its investment, according to experts on relations between the two countries, some of whom said China was likely building channels to Mr. Guaidó’s camp.

Beijing “maintains close contact with all parties through various means” and wants to work with all sides to facilitate negotiations, Chinese Foreign Ministry spokesman Geng Shuang said on Friday when asked if the Chinese government was in contact with Mr. Guaidó.

“No matter what the situation may involve, our cooperation should not be harmed,” Mr. Geng said.

Venezuela still owes Beijing around $20 billion, according to estimates by China’s Commerce Ministry. On top of that, China is the Latin American country’s second biggest arms supplier behind Russia and, by Beijing’s count, had $3.2 billion in direct investments 2017. Among those are at least three joint ventures between China National Petroleum Corp, or CNPC, and Venezuela’s state oil company, Petróleos de Venezuela SA, or PdVSA.

The U.S. Treasury imposed sanctions on PdVSA this week in a bid to wrest control of Venezuela’s oil wealth from Mr. Maduro—a move that potentially constrains his government’s ability to repay Beijing. 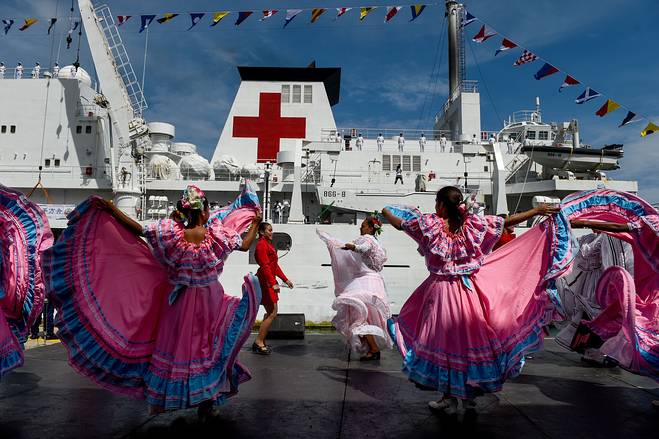 A Chinese hospital ship, a sign of China’s outreach to Venezuela, is welcomed to the port of La Guaira in September.PHOTO: FEDERICO PARRA/AGENCE FRANCE-PRESSE/GETTY IMAGES

China’s investments are now at risk under Mr. Maduro—and Beijing also recognizes that a U.S.-backed Guaidó administration might refuse to honor outstanding debts.

China’s Commerce Ministry spelled out this concern on Tuesday. “If the opposition party holds power in the future, a new Venezuelan government could use ‘protecting national interests’ as a reason to renegotiate contract terms with China and even just refuse to repay remaining debts,” the ministry said in its latest investment guidance report on Venezuela.

“China has learned an important lesson from this,” said a Chinese government adviser on Latin America. “We have to do things on a commercial basis, looking at market conditions, rather than for the sake of appearance and government-to-government agreements.”

China’s decision to ramp up lending to Venezuela 12 years ago was driven by a perceived imperative to secure oil supplies to fuel its growing economy at a time world-wide demand was pushing crude prices toward $100 a barrel. Sweetening the deal was the prospect of a strategic foothold in the U.S.’s backyard, as well as a potentially lucrative market for Chinese arms-makers, dam-builders and railway engineers.

Since then, China has provided Venezuela with more than $50 billion in loans, repayable in oil, according to China’s Ministry of Commerce; independent researchers put the figure at more than $62 billion.

The Chinese support was instrumental for Venezuela’s president at the time, Hugo Chávez. He channeled Chinese loans into funds under his personal control, financing programs that helped re-elect him in 2012, including one that sold refrigerators, televisions sets and other appliances to the public at a discount.

Venezuelan repayments to China appear to have slowed to a trickle since around 2015 following a renegotiation of terms, Chinese and foreign experts said.

Amid those frictions and a foundering of the Venezuelan economy, many Chinese projects, including the high-speed rail, have stalled and many Chinese companies have withdrawn their staff, according to people working for those companies.

Beijing has stood by Mr. Maduro, who announced after a visit to Beijing in September that he had secured another $5 billion of Chinese funding. Chinese President Xi Jinping expressed his support for the countries’ cooperation.

Even so, China has limited tools with which to back Mr. Maduro. Further financial or security assistance is unlikely to ease the political crisis, and direct military intervention—something Beijing has little experience with, isn’t a realistic option so far from Chinese shores, experts said.

China is wary of being drawn into a proxy conflict with the U.S., which has refused to rule out military intervention in Venezuela, at a time when China-U.S. relations have soured on a range issues from trade to cyberhacking to the South China Sea.

Beijing’s support for Mr. Maduro also risks alienating other Latin American countries that have backed Mr. Guaidó and undermines the image Beijing cultivates as an enabler of development and stability to other developing nations.

“In this case, they miscalculated, and then once that miscalculation became clear, they didn’t do anything about it,” said Matthew Ferchen, a research fellow at the Leiden Asia Center in the Netherlands who has studied China’s relations with Venezuela. “They have chosen to keep their head in the sand as the situation in Venezuela has deteriorated.”

Mr. Ferchen said China would quickly cooperate with Mr. Guaidó if he did take power, and in turn he would seek strong economic ties with Beijing, given its appetite for oil, while pushing to renegotiate Venezuela’s debts.

corruption editor - 11/11/2017
0
China must win its battle against corruption or face being erased by history, its new top graft buster said in an editorial on Saturday, underscoring...

India and China in stand-off over Himalayan border dispute

World editor - 24/07/2017
0
America has encouraged China and India to engage in dialogue in order to reduce tensions over a border dispute in the Himalayas. Picture: Indian army troops...

Politics editor - 25/08/2017
0
Afghanistan has long been known as the “Graveyard of Empires.” Conquerors like the Persians, Mongols, Brits and Russians all packed up and left — just as...

taiwan editor - 24/03/2022
0
Chinese law makers have made proposals calling for the enactment of the law on the reunification of the motherland. The new law not only opposes Taiwan independence, but also advances the process of annexing Taiwan, intending to increase pressure on the Tsai Ing-wen's government.

Trade editor - 15/02/2017
0
EU China Summit under plan now. The European Union is preparing an early summit with China in April or May in Brussels to promote free...

Steve Bannon: There is ‘no chance’ Trump is going to back down in the...

trade war editor - 15/05/2019
0
There is “no chance” President Donald Trump will back down in the U.S. trade war with China, former Trump advisor Steve Bannon told CNBC on Wednesday. “China has been...

Following the Guidance of Xi Jinping Thought on Diplomacy to Advance Diplomatic Work in...

Politics editor - 19/02/2019
0
By: Yang Jiechi, Member of the Political Bureau of the 19th CPC Central Committee and Director of the Office of the Foreign Affairs Leading Group...

Guo Wengui editor - 25/07/2017
0
The acquisitive Chinese conglomerate HNA Group moved to allay concerns about its ownership structure on Monday by releasing a statement showing that its biggest...

Lifestyle editor - 25/06/2017
0
Germany had its first taste of panda mania on Saturday as two furry ambassadors arrived from China to begin a new life as stars...

Society editor - 04/07/2017
0
Torrential rain lashed parts of central and south China on Monday, with floods damaging crops, forcing hundreds of thousands from their homes and killing...

457 visas scrapped: new visa rules explained: What it means, who will be affected

immigration editor - 19/04/2017
0
Malcolm Turnbull is abolishing the 457 visa program for skilled migrants. Here is a look at how the new replacement scheme will work and...

Tech editor - 16/06/2017
0
The term "spy satellite" has taken on a new meaning with the successful test of a novel Chinese spacecraft. The mission can provide unbreakable secret...