The world’s second largest economy is on the fast track to ditching cash.

Hundreds of millions of shoppers in China increasingly use their smartphones to buy everything from designer handbags to street snacks. At the heart of the country’s digital payments boom are QR codes, two-dimensional images made up of a series of black and white squares.

In the U.S. and Europe, QR codes (short for “quick response”) never really took off. They are slowly becoming more common in social media apps: Snapchat, Facebook and Spotify have been pushing their users to scan the barcodes to unlock new filters, add friends or access playlists.

But in China, QR codes are everywhere — used by major retailers, street markets and even beggars and buskers.

“The market is colossal and it is still growing,” said Shen Wei, deputy director of the a research institute that specializes in QR codes. He estimates that more than $1.65 trillion of transactions used the codes last year, accounting for about a third of all mobile payments in China.

Tencent’s (TCTZF) WeChat Pay and Alibaba (BABA, Tech30) spinoff Alipay are the dominant mobile payment apps in China. People can use them to pay in a store by scanning a product’s QR code or showing their personal code to the cashier. The money is deducted from mobile wallets that are usually linked to regular bank accounts.

The codes are easy to create and use, making them popular with small retailers and street vendors who don’t take credit cards, said Pan Helin, an economist at the Chinese Academy of Fiscal Sciences. 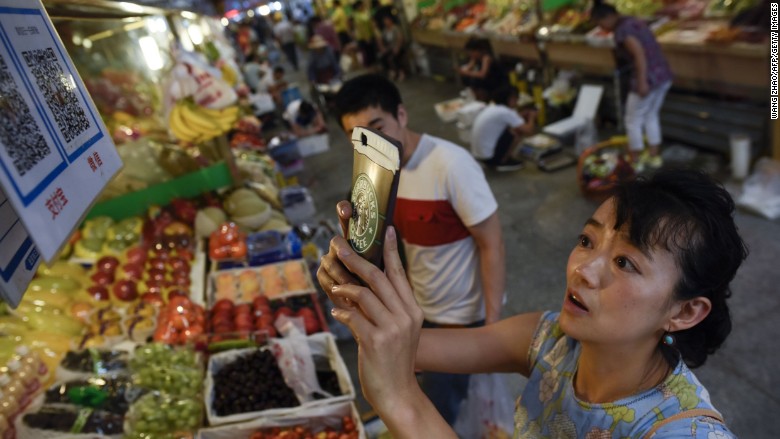 They’ve started cropping up in all kinds of situations.

In April, Chinese media carried photos of a bridesmaid in Beijing who wore a QR code around her neck to collect gifts of money for the bride and groom, reportedly upsetting the groom’s mother with the unorthodox behavior. Chinese wedding guests traditionally hand over money in red envelopes, but the bridesmaid said wearing the QR code would help people who forgot to bring enough cash with them.

But because the codes are so simple and accessible, they are also vulnerable to scammers who can try to trick users into scanning ones that install viruses designed to steal money or personal information.

Business owners say they can’t afford not to use QR codes.

“If you don’t do it, you will lose out on revenue,” said Alan Wong, an American businessman who owns 15 Japanese restaurants in Shanghai and Beijing.

Wong added QR code payments at his restaurants less than two years ago and says he expects them to account for 70% of transactions in the near future.

Beyond payments, the codes are now used for all sorts of services in China, like exchanging business cards and renting bikes.

Chinese authorities are also getting on board.

In Hangzhou, where Alibaba is headquartered, the local government has connected several public services to Alipay. Residents can now scan QR codes to pay for things like public transportation, utility bills and hospital visits. Other big cities have followed suit.

At the national level, China’s Ministry of Industry and Information Technology is investing heavily in research into QR codes.

Analysts predict they will eventually be used for official documents such as birth certificates, visas and ID cards.

Trade editor - 30/11/2017
0
The United States is joining a fight against China at the World Trade Organization in a decision likely to ratchet up tensions between Washington...

Politics editor - 30/08/2017
0
The Chinese Communist Party (CCP) will embark on its own “Game of Thrones” this autumn as delegates gather for its 19th National Congress in...

US china editor - 20/04/2021
0
John Kerry met with Yang Jiechi in Shanghai, and they failed to reach an agreement on the following issues: CCP virus, Taiwan, Japan, Diaoyu...

News editor - 31/08/2019
0
The spokeswoman for Parliament of the European Union (EU) On Saturday has expressed strong concern on the situation of Hong Kong, saying its member...

Guo Wengui editor - 01/09/2019
0
The radical cadres of the Chinese Communist Party (CCP) is planning to wage a war across the Taiwan Strait and actually has ambitions to...

The Booming Chinese Live Streaming Market Has Reached Its Zenith

Lifestyle editor - 08/09/2017
0
Growing quietly but steadily over the past five years, the live-streaming industry has become a viable source of income for many thousands across the...

China says Nobel laureate cremated and his wife is ‘free’

What is China’s ‘magic island-making’ ship?

World editor - 06/11/2017
0
China has unveiled a new dredging ship capable of creating islands such as those Beijing has already built in the disputed South China Sea. Described...

How China’s censorship will shape the Western world too

human rights editor - 15/09/2017
0
Authoritarians, in China and elsewhere, normally have preferred to dress their authoritarianism up in pretty clothes. Lenin called the version of dictatorship he invented...

Guo Wengui editor - 07/02/2019
0
On February 6 in New York, when asked by Sara whether the US Department of Justice would charge and prosecute those American individuals in...

US china editor - 27/10/2020
0
The US State Department has approved the potential sale of 100 Boeing-made Harpoon Coastal Defense Systems to Taiwan in a deal worth as much as...

Society editor - 04/07/2017
0
Police in Beijing have arrested 32 people for illegal fundraising linked to a scrapped project to create a "straddling bus" to beat traffic jams. The...

America’s “useful idiots” in the hands of the Communist dictatorship

US china editor - 23/10/2020
0
America's useful idiots The term "useful idiot" has often been attributed to Vladimir Lenin, the Russian communist leader in the early years of the 20th...