The festive season is a huge event in China, despite it being an atheist country, with shopping centres decorated and locals visiting monuments with elaborately decorated Christmas trees.But the Chinese people’s enthusiasm for Christmas has led some in China’s ruling Communist Party to call for a boycott.

Their fear is that local people are increasingly rejecting their own cultural festivities and traditions to indulge in ‘western opium’.

In the southern city of Hengyang, the local party reminded people no party members or their family should take part in “any religious activity from the West”.

The atheist party rejects the Christian holiday and demands its members pledge loyalty, according to The Telegraph.Earlier this month, a Chinese university also banned Christmas in a bid to help young people resist the “corrosion of Western religious culture”.

Shenyang Pharmaceutical University informed students the ban was to help them develop their own “cultural confidence”.

And the university claimed youngsters have been “blindly excited” by Western holidays. 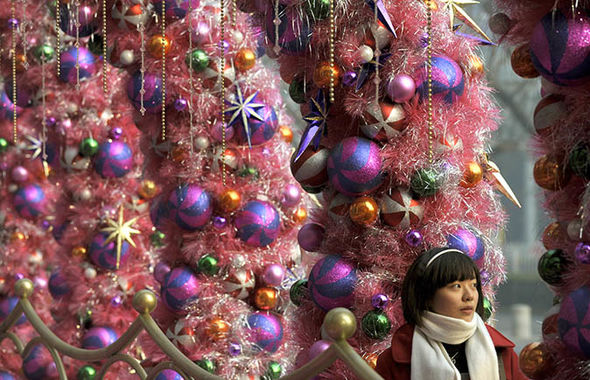 Getty: Christmas has become big business in China as the people increasingly celebrate the season

The statement said: “In recent years, influenced by Western culture and individual business operations, as well as erroneous public opinions expressed on the Internet, some young people are blindly excited by Western holidays, especially religious holidays like Christmas Eve and Christmas Day.”The ban was put in place “in order to guide the youth league members in building cultural confidence and resisting the corrosion caused by Western religious culture”.

A host of academics in China have blamed President Xi Jinping for tightening the rules after he took the helm of the Communist Party five years ago.

In the last five years, Chinese President Xi has presided over what rights groups decry as an elevated crackdown on the country’s rights activists and lawyers, with dozens arrested and hundreds detained.Ahead of Human Rights Day last Sunday, the European Union and the United States released statements saying they were “extremely concerned” about a deterioration of human rights in China, citing measures such as internet restrictions and detentions of lawyers.

But the State Council, China’s cabinet, said in an annual white paper: “Chinese citizens have never before enjoyed as ample economic, social, cultural, as well as civil and political rights, as they do today.”