Chinese authorities are guilty of the Kafkaesque enforced disappearance of Liu Xia, the wife of late Nobel laureate Liu Xiaobo, the couple’s US lawyer has claimed.

Jared Genser, a Washington-based human rights attorney who has represented them since 2010, made the claim in a formal complaint submitted to the United Nations on Wednesday. 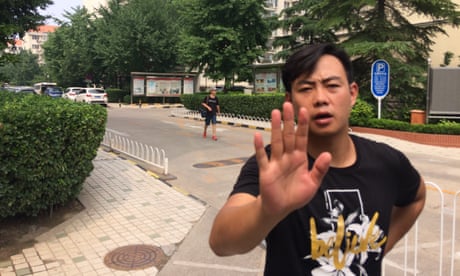 Get out! Chinese agents bar access to the ‘free’ wife of Liu Xiaobo

Almost three weeks after the Chinese dissident became the first Nobel peace prize winner to die in custody since German pacifist Carl von Ossietzky – who died in 1938 after years in Nazi concentration camps – his widow’s precise whereabouts are a mystery.

Friends say the 56-year-old poet was initially forced to travel to southwest China with security agents, but may now have returned to the capital, where she has lived under virtual house arrest since her husband won the Nobel peace prize in December 2010.

Foreign journalists who have attempted to visit the couple’s Beijing flat have faced harassment and physical violence while Chinese officials have refused to answer questions on the subject.

In his petition to the UN’s working group on enforced or involuntary disappearances, requesting “urgent intervention”, he wrote: “According to international law, an enforced disappearance involves (1) deprivation of liberty against the will of the person; (2) involvement of government officials; and (3) refusal to acknowledge the deprivation of liberty or concealment of the fate or whereabouts of the disappeared person.”

Genser told the Guardian: “It is crystal clear to me that what has happened to Liu Xia falls squarely and unequivocally within this definition.”

Liu Xia was last seen on 15 July when authorities released photographs showing her attending her husband’s controversial sea burial, which supporters suspect was devised to deny them a place to remember the democracy icon and his ideas.

“There has been no information as to where she is, who is detaining her or when she might reappear. [But] it is clear to me … that the Chinese government has her,” said Genser. “She continues to suffer enormously … I actually don’t think Kafka could have imagined a scenario as terrible as hers.”

Genser said he expected that, having received his complaint, the UN body would now ask Beijing to respond to claims that Chinese security forces were behind Liu Xia’s disappearance. He hoped the move would force Beijing to “reappear” Liu Xia, who has never been charged with any crime, and allow her to leave China. The United States, Germany and Britain are among the governments that have called for her release.

Genser also voiced support for a congressional push to rename the street on which China’s US embassy is located, in homage to the late democracy icon. According to the Washington Post, Chinese leaders are livid at the campaign and have been lobbying the Trump administration to veto the proposal. China’s top diplomat, Yang Jiechi, recently warned the US secretary of state, Rex Tillerson, that changing the street’s name from International Place to Liu Xiaobo Plaza would “seriously affect Chinese cooperation on major issues”.

Genser called for similar moves in European capitals that might see Rue de Washington in Paris become the Rue de Liu Xiaobo and London’s Portland Place renamed Liu Xiaobo Place. “It is clear that the Chinese government would like to erase the memory of Liu Xiaobo from the world’s imagination. The idea … that every piece of mail that would go to a Chinese embassy in Washington, London and Paris would be [stamped with his name] would really be anathema to the Chinese government.”

Genser said that while his focus was freeing Liu Xia, the campaign was an effective way to pressure Beijing. “To me this is a means to an end. I’m not committed to having the street renamed.

“But if the government won’t relent … they are leaving advocates with really no option other than to go down this road.”

China’s foreign ministry, the only government body that regularly interacts with journalists, has repeatedly ignored questions about Liu Xia and Liu Xiaobo, who was serving an 11-year jail term for subversion when he was diagnosed with late-stage liver cancer in May.

Questions about their plight have been purged from official transcripts of its press conferences. “I do not know the information you mentioned and is not a diplomatic question,” foreign ministry spokesman Lu Kang told a reporter from Sky News who inquired about Liu Xia’s whereabouts last week. “Next question.”

By Tom Phillips
The Guardian

Politics editor - 05/06/2017
0
Chinese commentators have responded strongly to Malcolm Turnbull’s keynote speech at the Shangri-La Dialogue warning Beijing against throwing its weight around in a “coercive”...

Remarks by President Trump on trade talk with China

Sports editor - 25/10/2019
0
A Chinese team has been kicked out of its own Military World Games after other countries alerted judges to "extensive cheating" by the hosts. Originally...

human rights editor - 20/10/2017
0
The United Nations has demanded that China should immediately release prominent human rights activists from detention and pay them compensation, according to an unreleased document obtained...

Society editor - 02/08/2017
0
IT WAS always going to be a controversial piece of writing. Chinese blogger Zhang Wumao’s damning assessment of life in Beijing and everyone who lived...

Trade editor - 18/07/2018
0
Europe’s push to cooperate with Beijing on WTO overhaul expands European efforts to open Chinese and other markets. The European Union is pressing China to...

Hong Kong focus: hell is the only place fit for Xi Jinping

hong kong editor - 01/07/2020
0
CCP lawmakers at the 20th session of the Standing Committee of the 13th National People's Congress on Tuesday unanimously voted to adopt the Law of the PRC on Safeguarding National Security...

Society editor - 24/07/2018
0
Chinese netizens have turned to blockchain to share a censored news story about faulty vaccines given to small babies. Their efforts to repost an...

Guo Wengui editor - 24/08/2019
0
Dear warrior friends, today is August 23. Guo Wengui is sending his greetings here for peace and safety. Have you done your exercises today? Did...

chinese communist party editor - 13/08/2020
0
China’s domestic politics has witnessed important developments in recent weeks. There has been a pronounced attempt to bolster President Xi Jinping’s status within the...

Smog-Eating Bikes Are About To Take On Beijing

Pollution editor - 10/08/2017
0
If one design firm can pull it off, cyclists in Beijing may soon double as mobile air filters. Holland’s Studio Roosegaarde has developed anti-smog bicycles and...

Business editor - 08/11/2017
0
Please use the sharing tools found via the email icon at the top of articles. Copying articles to share with others is a breach...