There are few pop culture icons better known on both sides of the Pacific than Jackie Chan. The action-movie star’s work across US and Asian film made him an obvious choice to represent Hong Kong Airlines and fly on the airline’s first flight to North America.

The Hong Kong-based airline — as its name suggests — had its maiden flight to YVR Vancouver International Airport on June 30, its first destination outside of Asia and Australia.

The carrier’s flight is just the latest inaugural flight to YVR from mainland China and Hong Kong. Unlikely as it seems, Vancouver is the epicenter for the international expansion of Asian carriers.

It seems a surprising hub, but consider its geographical advantage — all its Chinese destinations are closer to Vancouver than to any other major North American city.

“We have more direct mainland Chinese flights than any other airport in North America or Europe,” says YVR CEO Craig Richmond. “To put that in perspective, our relatively small, 23 million passenger-per-year airport has more Chinese flights than Heathrow, JFK, Los Angeles or San Francisco. When I tell people that, they’re surprised!”

Cathay Pacific Airways, Air China and Air Canada have linked Vancouver with Hong Kong and China for decades, but over the past few years, the number of Chinese airlines flying to Canada’s West Coast has exploded.

Coming off the plane was the usual inaugural flight group of airline and airport executives, and travelers heading to YVR — but the crowds in the terminal cheered when the airline’s “ambassador,” Chan, bounded off the plane.

Topping off the arrival, Chan and Richmond held a mock kung fu fight to the delight of the audience and a large group of Chinese- and English-language media.

Hong Kong Airlines’ arrival ups the total to 118 weekly direct flights to Hong Kong and China, with over 26,000 available seats between Vancouver and Shanghai, Beijing and Hong Kong, and smaller cities including Qingdao, Zhengzhou, Nanjing and Xiamen.

“We have so many ex-pats from Hong Kong living and working in Vancouver. In recent years, more and more Mainland Chinese have come here to live, to work, and to study,” says George Liu, chief marketing officer for Hong Kong Airlines.

“We have also built a very extensive regional network that will support our customers and travelers going to Hong Kong. We can take them to any place they want to go to in Asia,” says Liu.

And that’s in part because Vancouver also holds the title of the “most Asian city outside of Asia,” consisting mainly of Chinese, Indians and Filipinos, according to Canadian census data. In 2017, Statistics Canada projected that by 2036 around 78% of immigrants in Vancouver would be from Asia.

Vancouver has become such a popular destination for Chinese investors looking to spend their money abroad that the provincial government in 2016 levied a 15% tax on foreign home buyers. 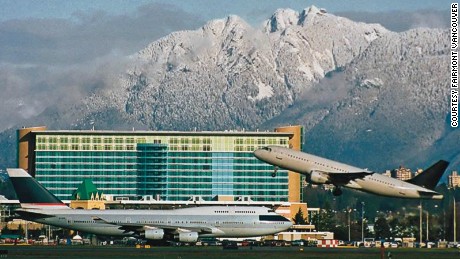 With its huge Chinese population base, Vancouver is at the forefront of connecting to China, which is set to become the largest air travel market on the planet by 2030. And that’s driving a buying spree by Chinese airlines who are taking new long-range jets from Boeing and Airbus that efficiently connect the continents.

YVR is easily within the range of the workhorse twin-aisle Boeing 777s and Airbus A330s that are in the fleets of many Asian carriers.

And the newest generation of airliners, the Boeing 787 Dreamliner and the Airbus A350, are being used by these airlines to establish new “long and thin” routes — with long distances, but lower passenger demand — like those from the second- and third-tier Chinese cities to Vancouver.

“These airplanes also provide these Chinese carriers with the prestige they need to compete shoulder to shoulder with Air Canada and any other airline flying not just from Canada to China, but from the US as well,” according to travel analyst Henry Harteveldt, Atmosphere Research Group.

Appeal of the familiar

With a massive market of Chinese passengers wanting to travel to and from Vancouver, the option of flying on a “home airline” may be appealing. Travelers tend to prefer flying on airlines of their home country.

“The airline may accept their preferred form of payment, there are people who speak their home language on the plane, and travelers know that meals, beverages and the in-flight entertainment is more likely to please them,” says Harteveldt.

Passengers who connect to or from the United States will find the process at YVR simple and swift.

As with all major Canadian airports, passengers clear US Customs and Border Protection before they board their US-bound flights. Travelers arrive at their US destination as if it’s a US domestic flight.

“It’s easy to make those connections,” says YVR’s Richmond. “We have to continuously improve on making things frictionless for the passenger.”

And the airport wins high marks from travelers. It was voted Best Airport in North America for the eighth consecutive year at the Skytrax World Airport Awards.

Hong Kong Airlines might be the most recent carrier to choose Vancouver as a destination, but it won’t be the last. Richmond hints that another Chinese carrier will announce service to YVR “later this year.”

Vancouver is only the start of North American flights for Hong Kong Airlines.Los Angeles is next, with the airline beginning service in December with its soon-to-be-delivered Airbus A350s.
By Howard Slutsken
CNN

Researchers examining why heart attacks on rise among Chinese Canadians