I am too young to remember the handover of Hong Kong to China in 1997 and its promise for the new world I would live in. But I have lived to see that promise trampled.

The Sino-British Joint Declaration, signed to pave the way for the handover, was supposed to protect the people of Hong Kong from Chinese interference in their society and markets until 2047. Yet as the handover’s 20th anniversary approaches, China muscles in where it promised to tread lightly while Britain avoids eye contact. 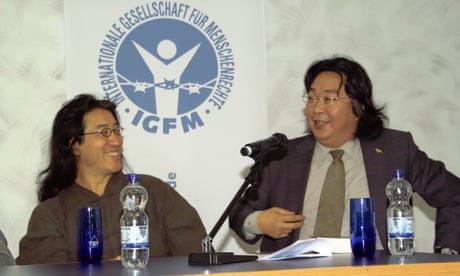 Gui Minhai: the strange disappearance of a publisher who riled China’s elite

As Xi Jinping has consolidated his grip on Chinese politics since he took office in 2013, Beijing has increasingly ignored the principle of “one country, two systems” on which the handover was based and actively eroded the freedoms this was supposed to guarantee.

In October 2015, my father Gui Minhai and his four colleagues were targeted and abducted by the agents of the Chinese Communist party for their work as booksellers and publishers. My father – a Swedish citizen – was taken while on holiday in Thailand, in the same place we’d spent Christmas together the year before. He was last seen getting into a car with a Mandarin-speaking man who had waited for him outside his holiday apartment. Next, his friend and colleague Lee Bo was abducted from the Hong Kong warehouse of Causeway Bay Books, which they ran together. Lee Bo is legally British and, like any Hong Konger, his freedom of expression should have been protected by the terms of 1997.

Their only “crime” had been to publish and sell books that were critical of the central Chinese government. So paranoid is Beijing about its public image, that it chooses to carry out cross-border kidnappings over some books. Causeway Bay Books specialised in publications that were banned on the mainland but legal in Hong Kong. The store’s manager, Lam Wing-kee, who was taken when travelling to Shenzhen, has described Causeway Bay Books “a symbol of resistance”. In spite of Hong Kong’s legal freedoms of speech and of the press the store is now closed because all its people have been abducted or bullied away. Other Hong Kong booksellers are picking “politically sensitive” titles off their shelves in the fear that they may be next; the next brief headline, the next gap in a family like my own.

I continue to live with my father’s absence – his image, messages from his friends, the cause he has become. Turning 53 this year, he spent a second birthday in a Chinese prison. Soon he will have spent two years in detention without access to a lawyer, Swedish consular officials, or regular contact with his family.

My father’s case is only one of many that illustrate the death of the rule of law in Hong Kong. Earlier this year, Canadian businessman Xiao Jianhua – who had connections to the Chinese political elite – disappeared from a Hong Kong hoteland later resurfaced on the mainland. In last year’s legislative council elections, six candidates were barred from running because of their political stance. The two pro-independence candidates who did end up getting elected were prevented from taking office. If “intolerable political stance” is now a valid excuse for barring LegCo candidates, then it won’t be long before the entire Hong Kong government is reduced to a miniature version of China’s.

The Joint Declaration was meant to guarantee that no Hong Kong resident would have to fear a “midnight knock on the door”. The reality at present is that what happened to my father can happen to any Hong Kong resident the mainland authorities wish to silence or bring before their own system of “justice”. Twenty-one years ago, John Major pledged that Britain would continue to defend the freedoms granted to Hong Kong by the Joint Declaration against its autocratic neighbour. Today, instead of holding China to its agreement, Britain glances down at its shoes and mumbles about the importance of trade. It is as if the British government wants to forget all about the promise it made to the people of Hong Kong. But China’s crackdown on dissent has made it difficult for Hong Kongers to forget.

Theresa May often emphasises the importance of British values in her speeches. But Britain’s limpness over Hong Kong seems to demonstrate only how easily these values are compromised away. I worry about the global implications of China being allowed to just walk away from such an important treaty. And I worry that in the years to come, we will have many more Lee Bos and Gui Minhais, kidnapped and detained because their work facilitated free speech. Hong Kong’s last governor, Lord Patten, has repeatedly argued that human rights issues can be pushed without bad effects on trade. Germany, for example, has shown that this is entirely possible, with Angela Merkel often publicly criticising China’s human rights record. With a potentially hard Brexit around the bend, a much reduced Britain will need a world governed by the rule of law. How the government handles its responsibilities to Hong Kong will be decisive in shaping the international character of the country that a stand-alone Britain will become. I for one hope it will be a country that honours its commitments and that stands up to defend human rights.

By Angela Gui
The Guardian

Angela Gui is the daughter of Gui Minhai, a Hong Kong bookseller who disappeared from his home in Thailand in October 2015

Skype Has Disappeared From App Stores in China. It’s Not Clear Which Law It...

Business editor - 21/11/2017
0
Microsoft’s Skype may still be functioning in China, but it’s becoming increasingly difficult to find a way to download it in that country. According to...

World editor - 16/03/2017
0
The new US secretary of state is heading off on his first trip to Asia, where diplomatic tensions run high. Rex Tillerson, who has no...

Politics editor - 27/12/2018
0
Mr. Xi Jinping shall be remembered as one of the most controversial figures in China’s 70 years of communism. We must admit that he...

Guo Wengui and Steve Bannon put forth five guidelines for the protests in Hong...

Lifestyle editor - 07/02/2017
0
By April Ma Parents of gaming-addicted adolescents soon should be assured that their children will not be playing compulsively into the wee hours of the...

News editor - 18/12/2018
0
According to Xinhua, Chinese President Xi Jinping on Tuesday summed up the great achievements of the country's reform and opening-up at a gathering celebrating...

A song from the Dream of Red Mansions – vivid description of CCP officials...

Society editor - 05/03/2019
0
Sordid rooms and vacant courts, Replete in years gone by with beds where statesmen lay; Parched grass and withered banian trees, Where once were...

The Booming Chinese Live Streaming Market Has Reached Its Zenith

Lifestyle editor - 08/09/2017
0
Growing quietly but steadily over the past five years, the live-streaming industry has become a viable source of income for many thousands across the...

Politics editor - 02/08/2017
0
Concerns that U.S. regulators would block the sale of Anthony Scaramucci's hedge fund to a Chinese company may have played a role in...

Society editor - 09/01/2017
0
By Victoria Craw CHILLING footage has emerged showing the abandoned remains of a Chinese city used to build nuclear bombs known only as ‘404’. The video...

Art & Entertainment editor - 23/08/2017
0
Guo Jingming, one of the best-selling young writers in China has recently found himself embroiled in charges of sexual harassment. The accuser, Li Feng,...

After a fall into a pit, Donald Trump comes to sense who’s behind the...

World editor - 01/03/2019
0
This is the first time Donald Trump has suffered a major setback in his diplomatic affairs. It is a total disgrace for the United...

Lifestyle editor - 13/06/2017
0
Soren Schwertfeger finished his postdoctorate research on autonomous robots in Germany and seemed set to continue his work in Europe or the United States,...