It was like Black Monday for some units of HNA Group Co.

Shares of three companies linked to the Chinese conglomerate plunged by the maximum 10% permitted by stock exchanges in Shanghai and Shenzhen, triggering automatic trading halts after they touched multi-year lows.

The apparent reasons: news late last week that HNA Group hired banks to advise it on a stake sale in a Spanish hotel chain, and a Goldman Sachs Group research note that said HNA could announce major asset sales.

On Monday, shares of Hainan HNA Infrastructure Investment Group, an infrastructure and construction firm; Zhejiang Haiyue, a petrochemicals company; and HNA Innovation, a real-estate company; all hit so-called “limit down” levels on the Shanghai exchange, meaning they lost a tenth of their value.

The drops went against the broader Shanghai stock market, which rose 0.4% to its highest closing level in two years. 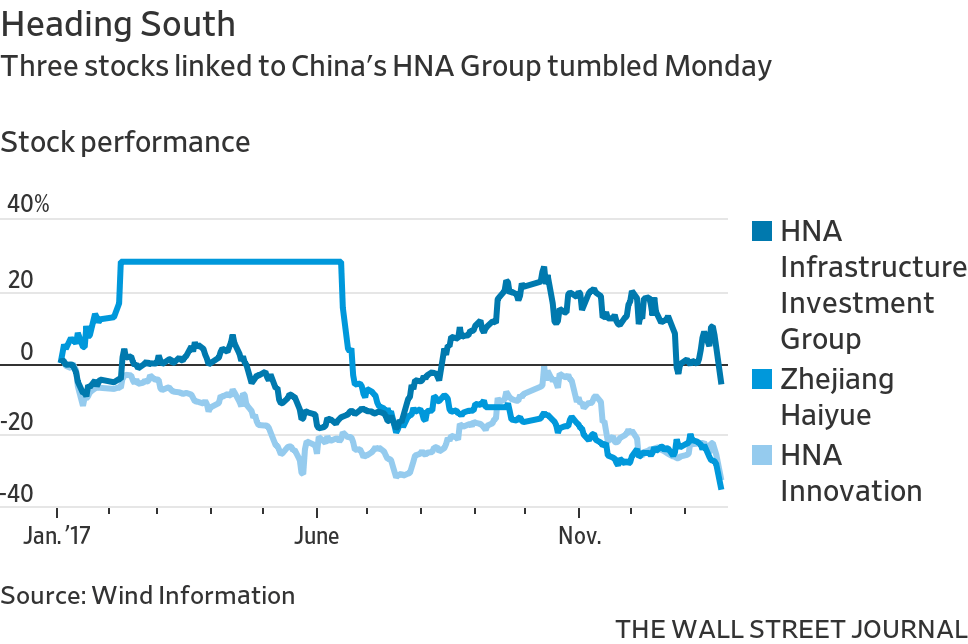 HNA Group itself is a privately-held, sprawling conglomerate that has about a dozen listed units and scores of private subsidiaries in China and abroad.  Prior to Monday, shares of another five publicly-listed companies linked to HNA had been halted from trading pending major announcements, with one firm saying that a “major asset restructuring” was being planned.

In a report dated Jan. 19, Goldman Sachs credit analysts noted that U.S.-dollar bonds issued by various entities of HNA Group have underperformed in recent weeks and most were trading with yields of over 10%, a sign of investor skittishness. “It is difficult to obtain a clear financial picture” of HNA Group, the report noted, because of the company’s complex structure and multiple layers of subsidiaries.

Goldman said it estimated HNA Group’s total debt plus guarantees at $89.5 billion as of June 2017, of which $26 billion were short-term liabilities. It noted that while HNA has about $29 billion cash on hand, it could not tell where the debts and cash resided within the group “so there is the possibility of significant mismatches between debt and cashflows across the various subsidiaries.” Pointing to one of the earlier stock suspensions, the report said it could be possible that HNA is “seeking to restructure its various asset holdings, which may include asset sales to ensure that they will be able to meet payment obligations.”

Last Friday, Spain’s NH Hotel Group said in a filing that HNA Group had hired two banks to seek buyers for its 29.5% stake in the company, it on a sale of the Chinese group’s one-third stake in the company, which owns around 400 hotels. The stake recently had a market value of around EUR628 million. ($769.2 million)

After an aggressive acquisition spree for much of the past two years, HNA has scaled down its global expansion plans after Chinese regulators scrutinized some of its activities and funding sources. The group has said it can meet its debt obligations and has financial support from large Chinese banks, but has also resorted to new ways to try to raise more cash, recently pitching its employees an investment that could yield as much as 39%.

Ingraham: Americans are finally seeing the Chinese government for what they are

How the two governments describe the latest trade talk last week in Washington?

Are you still single? The annual question dreaded by China’s ‘leftover women’

Society editor - 28/01/2017
0
By Alice Yan “Are you still single?” That’s the one question Rachel Xu Rong knows she’ll be asked repeatedly during her home town holiday this Lunar...

Politics editor - 29/09/2017
0
The White House is quietly conducting a comprehensive review of its approach toward China, according to administration officials and outside advisers with knowledge of...

Art & Entertainment editor - 30/10/2019
0
Swift is expected to perform Nov. 10 in Shanghai at an annual live concert event that typically draws international pop stars and celebrities who are...

Could the world’s new superpower be on the verge of collapse?

World editor - 21/06/2017
0
COULD China be witnessing the beginnings of its own end? The vast majority of commentators say chances are slim. Most are as dismissive of China-sceptics...

China accuses ADF of encircling it amid military exercises

World editor - 14/09/2017
0
Australia has been accused of “encircling” China, in an article published by the official newspaper of the Chinese Communist Party, The People’s Daily. The analysis article...

Lifestyle editor - 09/01/2019
0
China GDP growth With the escalation of US China trade war, the Chinese economy is facing great difficulties and GDP is going downwards. “It’s intriguing that...

China shuts down thousands of websites in Internet network crackdown

human rights editor - 19/08/2017
0
Cambridge University Press has removed hundreds of papers and book reviews from the online version of one of its journals in China after a...

President Xi has put himself on fire: unrepentant and stubbornly resisting

Military editor - 05/01/2019
0
China's armed forces must strengthen their sense of urgency and do everything they can to prepare for battle, President Xi Jinping told a meeting...