Beijing (CNN)The first thing Jiang Wang does when she wakes up in the morning is check on her daughter to make sure she’s breathing clean air.

Next, it’s time to start making breakfast. She’s already made sure all the groceries come from an organic farm.
She’ll wash her produce with tap water filtered through a separate treatment system under her sink.
But that water isn’t for drinking — there’s imported bottled water for that.
This is how Wang typically starts her day, trying to minimize the effects of the toxic environment in Beijing.
“From the moment you open your eyes till the moment, you rest in the evening,” she says, “you have to pay really (close) attention, to the air, to the water, to the food you eat.” 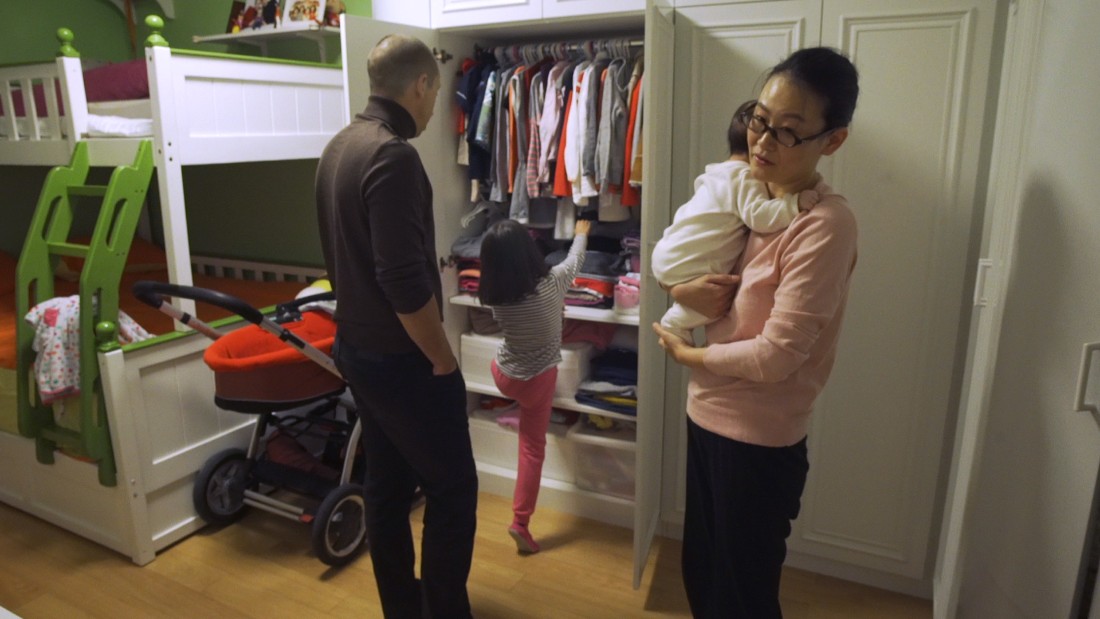 Jiang Wang, her husband Ludovic Bodin and her two daughters, 6-year-old Mia and 3-month-old Anna.
Wang and her family are part of a growing number of Beijingers who are trying to pollution-proof their lives.
And money is no cost.
It’s “very expensive,” she says. “But think about the health. There is nothing to trade off.”
But for Beijing’s rising middle class and poorer residents, this high-end home equipment is financially out of reach.
That’s turning pollution into both a health issue and a class issue — and it’s killing off those left behind.
Research by Nanjing University’s School of the Environment has linked smog with nearly one-third of all deaths in China, positioning it on a par with smoking as a threat to public health.
Published in November last year, the study analyzed over 3 million deaths across 74 cities throughout China in 2013. The findings revealed that as many as 31.8% of all recorded deaths could be linked to pollution, with major cities in Hebei, the province that encircles Beijing, ranked among the worst.
“Air pollution exacerbates inequality between the rich and poor in urban China,” Matthew Kahn, a professor of economics at the University of Southern California, told CNN in an email.
“The rich live in cleaner parts of the city and on more polluted days they can drive to work, work inside, access better doctors, have second homes in the countryside and have expensive and effective air filters.”
Beijing risks becoming a tale of two cities, a place where the rich and poor don’t even breathe the same air.

The Wang family recently installed a fresh air filtering system, which cost them about $4,300.
It works like a ventilation system, cleaning outside air and pumping it into their home.
They also have an air purifier in each room, eight in all, to filter out carbon dioxide and take care of any dirty air that may leak in. Those add up to about $7,200.
And the purifiers need to be changed about once a month — which rings in at $430.
Water filters for sinks run about $300 and shower filters can cost upwards of $1,000 on JD, a popular Chinese e-commerce site.
For the super wealthy, companies such as Environment Assured, an indoor air quality and water filtration consultancy, will assess the toxicity of living and office spaces.
The company offers a top-of-the-line package that comes in at just under $15,000, according to Alex Cukor, the vice president of enterprise solutions at Environment Assured.
Real estate prices can swing based on technology and proximity to pollution, too.
A two-bedroom apartment in Beijing’s MOMA complex — where the units come equipped with air filtration systems — cost far in excess of $3 million, according to the Lianjia real estate listings.
The International School of Beijing, where tuition is north of $37,000 a year, built a pressurized dome for kids to play in during the smog. It cost $5 million. (Some public schools have also built domes recently.)
Some people will get organic produce shipped directly to their homes. A yearly membership to Tony’s Farm costs $3,400. That will get you two weekly deliveries of produce, three kilograms (about 6.6 pounds) each.
Others escape the bad air by traveling abroad.
And then there’s the more outlandish products.
You can buy canned air from Britain for $115 a bottle. Anti-pollution creams can top $100 (the jury’s still out on how well these work) and there are also expensive “pollution-catching” amulets.
The typical Beijinger likely can’t afford any of that — the average individual salary is a little less than $17,000 year, according to a report from Peking University. And that’s the highest in China.
But even though China’s economic boom has delivered material wealth to millions, growing numbers are becoming frustrated that China’s elite and ultra-wealthy — many of whom got rich off the country’s rapid industrialization that caused the pollution problem — can protect themselves, but they can’t.
“It really has reached a point where concern over air pollution throughout the country is threatening China’s social stability,” Barbara Finamore of the Center for Strategic and International Studies (CSIS) said in a question and answer session in May.
A recent environmental protest in the southwest city of Chengdu was quickly quashed by authorities.

China is the world’s largest emitter of greenhouse gasses, and it’s costly — the country’s economy lost roughly $535 billion due to pollution in 2012, according to the RAND corporation.
The government knows air quality is a pressing problem and publicly declared a “war on pollution” in 2014.
With their newfound wealth, China’s upper and middles classes have been able to travel abroad and see more of the world — and in turn learn about the dangers of pollution and how to avoid it.
But on the street during a red alert it is still commonplace to see ordinary people wearing a scarf over their mouth and nose, rather than a protective mask.
Even state media has said the government needs to better study and understand the effects of pollution.
Still, China had some success in recent years, both locally — 663 localities in Beijing’s city limits replaced coal with clean energy, state-run Xinhua news reported — and internationally, with the signing of the Paris climate accords.
And China actually leads the world in wind and solar power, according CSIS’ Finamore.
Such measures though have done little to dispel the view that Beijing is becoming increasingly unlivable. “Under the Dome,” a Chinese documentary on the negative effects of pollution, took the country by storm when it debuted in 2015. The film drew millions of views online, before government censors stepped in and removed it from Chinese video sharing websites. 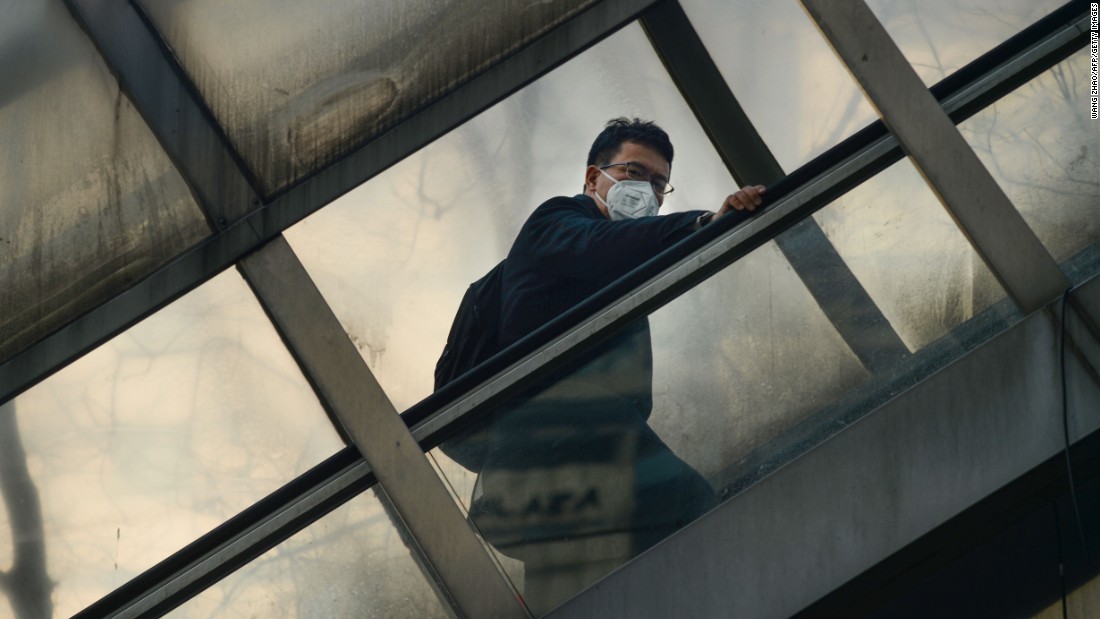 A growing industry
Where the government sees a problem, entrepreneurs see an opportunity.
A lucrative industry is cropping up around pollution-proofing the lives of people like Wang, who wants to protect her 6-year-old and 3-month old daughters.
“Her (the younger daughter’s) life is just beginning and air she breathes in and out is of such bad quality. I couldn’t sleep, literally, two nights continuously,” Wang said. “Our kids, they are very young. They have life ahead of them.”
Beijing is fertile ground for this new industry — it’s home to more billionaires than any other city in the world.
There were 200,000 air purifiers sold in China in 2010, according to Daxue Consulting. That number spiked to 2 million four years later. Demand is expected to reach 4 million annually by 2018, according to Huidian Research, a Chinese consulting and marketing firm.
Much of the current revenue is coming from high-end products, but that is slowly changing.
Air purification is becoming more and more accessible, Cukor says. The Chinese technology company Xiaomi, for example, now offers a relatively potent air purifier for $360.
But a lot of the spikes in business are fleeting, coming and going with the thick plumes of smog that roll in.

Activity at Environment Assured has been nonstop in the past three weeks, since Beijing’s most recent “airpocalypse,” Cukor says. 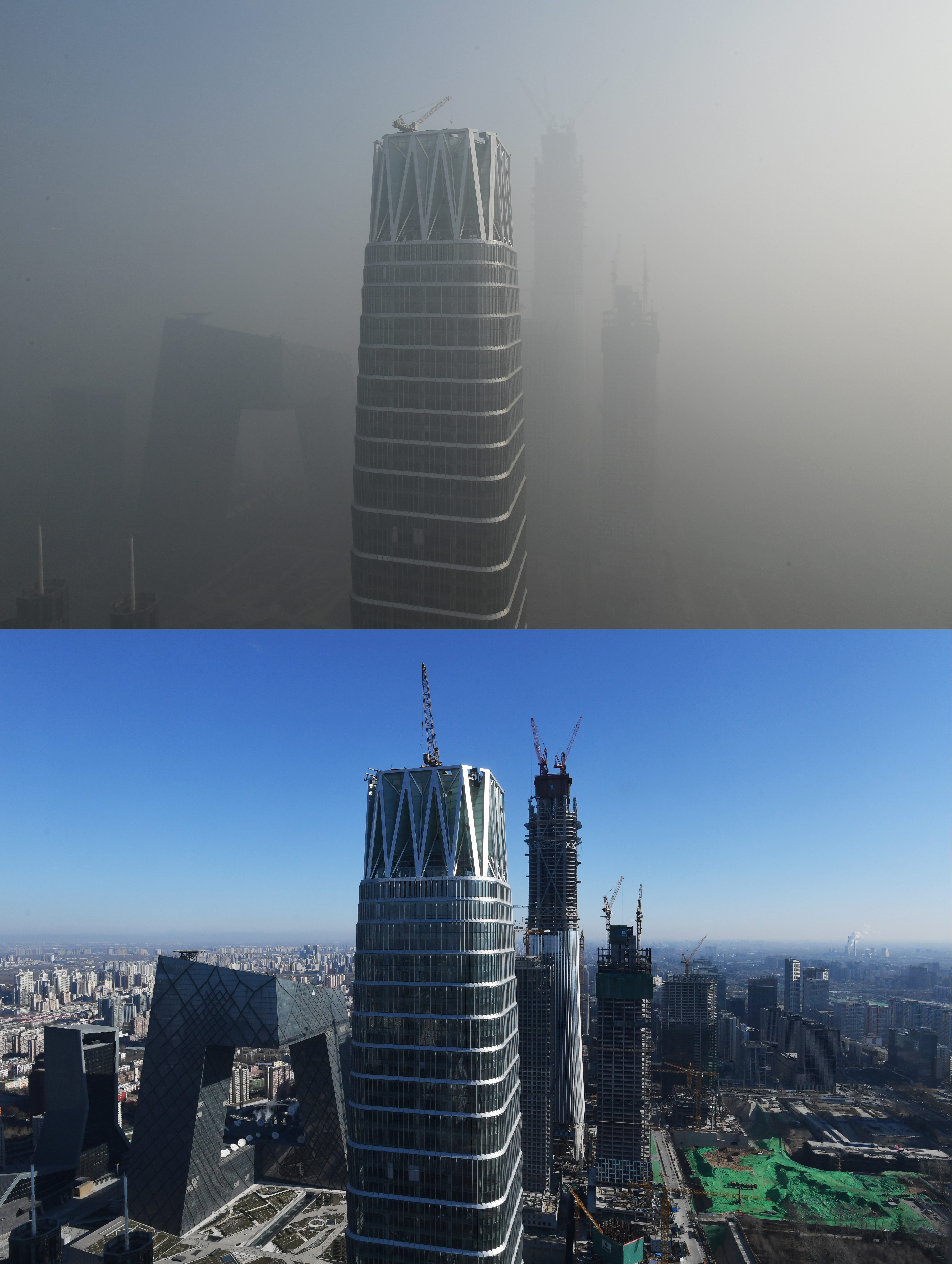 Beijing on January 1 (top) and on December 23 (bottom)

Data from JD, the Chinese online retailer, shows from December 16 to December 20 — during the government’s most recent red alert pollution warning — sales of masks on the site increased by 380% while air purifiers, rose by 210%
Research from Kahn, the USC professor, found similar trends when analyzing sales data from Taobao, another online retailer, in winter 2013, during another spell of bad air quality.
It’s likely because people with less disposable income don’t have the time or money to think about prevention until the problem has gotten out of hand.
And they’re not always buying effective products — many cheaper options simply don’t do the job.
Some have called foul on false advertising as well; a recent report in the Financial Times cited claims by concerned mothers who tested the air quality in some malls promising clean filtered air and found it was not as safe as advertised.
“This poor versus rich differential propensity to invest in self protection means that air pollution exposure exacerbates quality of life inequality in Chinese cities because the poor are exposed to more risk,” Kahn and the paper’s other authors write.
Kahn and and his co-author Zheng Siqi, a professor at Tsinghua University, remain optimistic, pointing to the Kuznets curve.
This curve posits that as per-capita income rises, so does environmental degradation — but only to a point. Once people have enough disposal income that they aren’t living day-to-day, they can afford to worry about pollution, counteract it and hold their leaders accountable.
And when that day comes, pollution should decrease as per-capita income rises.
For her daughters, Wang hopes that day comes soon.
“For us — for everybody — health is number one,” she says.
“Without health nothing can be done.”
CNN

Military editor - 30/08/2018
0
hina is to build its first military base in Afghanistan for hundreds of troops carrying out counter-terrorism training missions across the border from its...

The Complete Success of China’s Propaganda Work is an Absolute Nightmare of the Chinese...

hong kong editor - 20/10/2019
0
Over one million Hong Kongers have turned out onto the streets in protest of the CCP's brutality and violations besides the Five Demands, once...

Business editor - 22/09/2017
0
China's attempts to reduce risks from its rapid buildup in debt are not working as quickly as expected and credit growth is still too...

Social media editor - 18/09/2017
0
Setting up a Twitter account may seem a fairly obvious thing for a political party to do, but the step has not so far...

From Liu Xiaobo to Winnie the Pooh, China’s net censors can make you disappear

Politics editor - 18/07/2017
0
The only Chinese person ever to receive a Nobel prize while living in China, the writer and dissident Liu Xiaobo, was able to spread...

Trade editor - 28/12/2019
0
The Trump administration’s “phase one” trade deal with China may mark the end of the first chapter of the trade conflict between the United...

Weekly Report of The True Economy Inside China

World editor - 14/02/2017
0
The White House is exploring a new tactic to discourage China from undervaluing its currency to boost exports, part of an evolving Trump administration...

Military editor - 22/10/2018
0
Two U.S. warships sailed through the Taiwan Strait, U.S. and Taiwan defense officials said Monday, a maneuver intended to signal to China that the U.S. could...

US china editor - 21/12/2020
0
China’s authoritarian rulers impose draconian restrictions on the Chinese people’s freedoms of expression, religion or belief, association, and the right to peaceful assembly.  The...

A chilling story about Chinese pressure in Australia shows how far Beijing will reach...