Hong Kong (CNN)Anastasia Lin just wanted her father to see her face.
Prevented from taking part in Miss World 2015 when China refused to allow her to enter the country, where the final was being held, she tried again this past December.
The Canadian was under no illusions about coming home with the 2016 crown. Getting on stage would be enough: the Miss World final is broadcast around the globe, including in her native China, where her father has been harassed and prevented from leaving.
In the end she appeared on screen for all of six seconds, during her introduction. For the rest of the show she was tucked away at the back of the crowd of contestants, or at the corners of the stage.
“It was really too naive to think that my father could see me,” Lin said.
If she is slightly bitter, it’s with good reason. Her sliver of screen time was bought with months of practice and rehearsal, and, most painfully for an outspoken human rights activist, her silence.
During the competition, Lin said she was placed under a communication blackout and forbidden from speaking to journalists, part of what analysts say is a pattern of western companies cooperating with China to silence critics overseas.
Miss World chairwoman Julia Morley said the organization did “our best to assist Miss Lin and have done absolutely nothing to prevent her doing everything she wanted to do.”

Chinese students wearing the uniform of the Young Pioneers.
Lin, 26, was born in China’s Hunan province. As a child, she wore the iconic red scarf of the Young Pioneers and vowed to “struggle for the cause of Communism.”
One of her duties in the state-run youth organization was to corral other children to watch propaganda broadcasts, which at the time were intently focused against Falun Gong.
The spiritual movement, which has roots in the ancient Chinese meditative martial art qigong, exploded in popularity in the 1990s, growing to an estimated 30 million members by the end of the decade, according to the US State Department.
In 1999, after upwards of 10,000 Falun Gong practitioners staged a peaceful demonstration in Beijing — the largest mass protest the Chinese capital had seen since the Tiananmen Square massacre a decade before — the movement was banned and a brutal crackdown launched, with tens of thousands of people arrested.
Now a prominent spokeswoman against the persecution of Falun Gong practitioners, Lin said she was largely unaware of the crackdown at the time. It wasn’t until she moved to Canada at age 13 that she “learned that what were told in China was completely different to reality.” 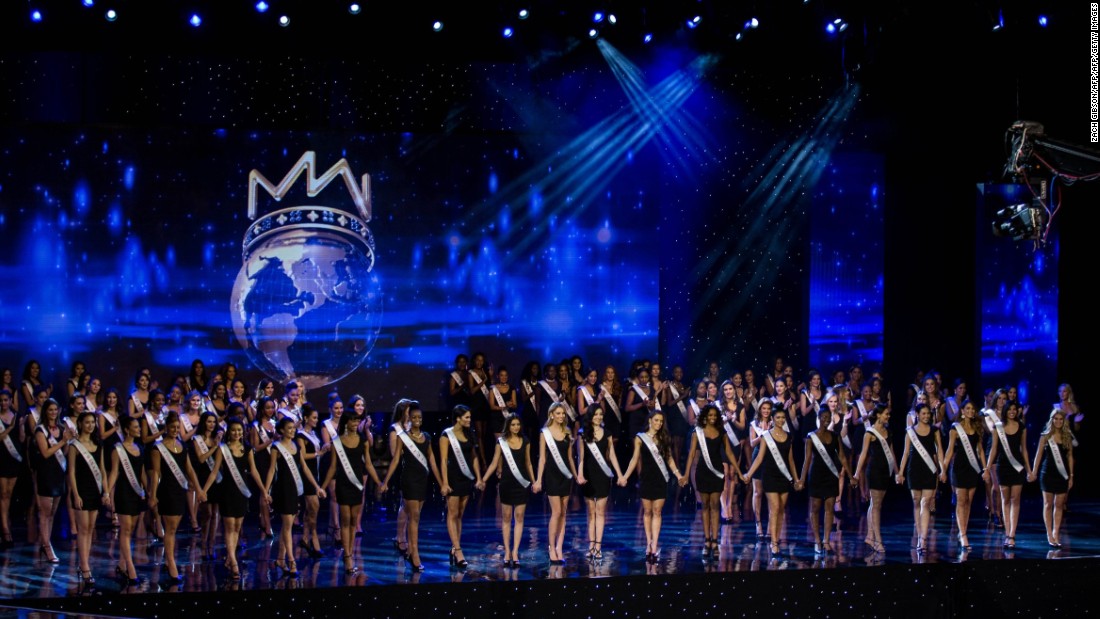 Contestants on stage during Miss World 2016 in Washington DC.

“I didn’t start as an activist at all,” Lin said.
As a teenager, she was focused on acting and modeling, eventually studying theater at the University of Toronto.
It was there that she was approached by a Chinese producer who was looking for someone to play the role of a student killed during the 2008 Sichuan earthquake. Thousands of children died during the disaster, as shoddily built schools collapsed on top of them.
“He said they couldn’t find anyone to play this role, because it was too sensitive,” Lin said. “I jumped on the opportunity.”
Similar offers quickly followed: “At one point I really had a monopoly on these types of roles.”
At the same time, she began competing in beauty pageants to raise her profile and get on-camera experience. She placed third in Miss World Canada in 2013, going on to win the competition outright in 2015.
That’s when the trouble started.

As Canadian champion, Lin was due to take part in Miss World 2015, to be held that year in Sanya, on China’s southern island of Hainan. But as the event approached, her visa request went ignored and she was left hanging, unsure if she could take part in the competition.
She also began receiving distressing messages from her father, who still lives in China. Lin said he was approached by security officers and told that if she didn’t “stop her political and human rights activities” her family members would be arrested.
These threats did not stop her speaking out — “my personality is that I can’t really hide things” — but she and her father no longer talk due to fears for his safety.
Many activists have made similar allegations. Ilshat Hassan, president of the Uyghur American Association — which advocates for members of China’s Turkic-speaking Muslim minority — told CNN last year that his family has faced repeated harassment over his activism. “Just months ago my mum says please stop what you’re doing, or don’t call us,” he said.
Determined to at least try and take part in Miss World, Lin flew to Hong Kong — where Canadians do not require a visa to enter — and attempted to get a flight to Sanya.
“They declared me persona non grata and prevented me from boarding the plane,” she said.
Her denial of entry was quickly reported worldwide, massively raising her profile, and earning her a denouncement in the state-run Global Times, which accused her of lacking “reasonable understanding of the country where she was born” and warned her against “being tangled with hostile forces against China.”

Given a second chance to participate in Miss World 2016, Lin vowed to toe the line, not wanting to be denied a place in the final again. “I wanted to do things by the book,” she said.
Nevertheless, she chose as her “Beauty with a Purpose” project to shine the light on organ harvesting in China, a topic with which she had become familiar with after acting in the Canadian film “The Bleeding Edge.”
In June, a report by former Canadian lawmaker David Kilgour, human rights lawyer David Matas, and journalist Ethan Gutmann claimed, based on publicly reported figures by hospitals, that China was still engaged in the widespread and systematic harvesting of organs from prisoners, including prisoners of conscience.
Arriving in Washington DC, Lin received multiple media requests. Keen to play by the rules, she said she forwarded them all to Miss World officials, only to have them all initially denied, though several were later granted.
Lin said she was also angrily rebuked after an official spotted her chatting with a reporter in the lobby of her hotel.
“They said I was breaking rules, telling lies,” she said. “I felt like a criminal.”
During this period, at least six other contestants were allowed to give interviews.
After Miss World allowed her to give press interviews, Lin said she was still carefully monitored when talking to reporters.
Morley said that all contestants were chaperoned and denied that Lin was prevented from speaking in any way, saying she “had full access to any interviews without exception.” 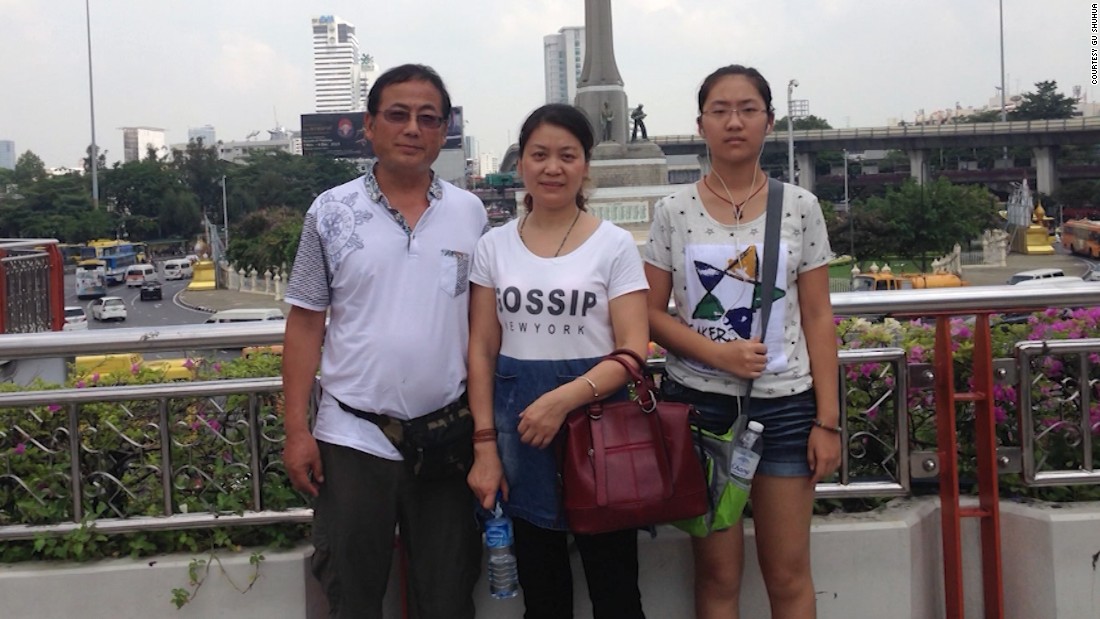 Western companies and governments are facing increasing pressure from Beijing as it attempts to sideline overseas critics, said Amnesty International researcher Patrick Poon.
CNN has previously reported how Beijing has reached across borders in its hunt for dissidents, working with cooperative governments to deport critics back to China.
Economic pressure has also been brought to bear on companies that depend on revenue from China.
Last week, Apple removed the New York Times from its Chinese app store on the grounds the paper’s app “(violated) local regulations,” a move anti-censorship activist Charlie Smith characterized as “actively enabling infringements of human rights.”
“Foreign governments and foreign organizations should rethink whether what they have been doing in kowtowing to China’s influence means that they compromise (dissidents’) freedom of expression and freedom of movement,” Poon said.
China’s Ministry of Foreign Affairs did not respond to a request for comment.
Miss World’s Morley denied Lin’s accusations that her treatment was related to pressure from Beijing, pointing out that this year’s competition, unlike Miss World 2015, did not have any Chinese sponsors.
Despite her experiences, Lin said she was grateful to the competition for giving her a platform.
“It’s not Miss World’s fault they’re so nervous, they’re a vulnerable pageant organization,” Lin said. “The entire world is economically tied to China.”
CNN

World editor - 20/05/2017
0
Two Chinese Su-30 fighter jets intercepted a US Air Force radiation detection plane over the East China Sea Wednesday, according to the US Pacific...

Military editor - 08/01/2019
0
Note: An official Chinese newspaper warned Washington not to demand too much from Beijing as talks on ending their tariff war entered a second day...

The Chinese Fugitive Living In A $67 Million Manhattan Apartment

corruption editor - 20/05/2017
0
“My money is clean. I'm willing to accept everything being in full public view.” After Guo Wengui escaped China, he discreetly paid $67 million in...

Society editor - 19/09/2020
0
Dr. Li-Meng Yan has been making headlines as the whistleblower that revealed that the coronavirus was actually manufactured in a lab in Wuhan. Again on...

World editor - 25/08/2017
0
Chinese president Xi Jinping said on Thursday that he is ready to make concerted efforts with his South Korean counterpart Moon Jae-in to address...

World editor - 01/11/2020
0
The US Department of Justice has just unsealed an indictment that tells a chilling story of surveillance, harassment and coercion carried out by China’s...

Politics editor - 28/09/2017
0
Change is under way at the top of China’s People’s Liberation Army, while the once all-powerful Communist Youth League ­faction is being hollowed out. Such...

Rex Tillerson in China to pile pressure on North Korea

Ownership mystery at the biggest company you’ve never heard of

Business editor - 08/01/2017
0
Apple has withdrawn the New York Times from its China App Store, following a request from Chinese authorities. The paper said the move was aimed...

Chinese academic who called Mao a ‘devil’ says he was sacked

Politics editor - 05/08/2017
0
A Chinese professor who called the founder of modern China Mao Zedong a "devil" on social media said on Friday he had been sacked...

Business editor - 01/08/2017
0
Days after Apple yanked anti-censorship tools off its app store in China, another major American technology company is moving to implement the country’s tough restrictions on online...

World editor - 09/07/2017
0
U.S. President Donald Trump took a conciliatory tone on Saturday at a meeting with Chinese President Xi Jinping where the leaders agreed to keep...