Authorities in China’s south-east have confiscated, destroyed, and even exhumed coffins in accordance with a controversial “zero burial” policy, according to local media reports.

The Jiangxi Provincial Government wants locals to only cremate their loved ones’ remains, but poor families in rural areas of China often spend a fortune saving up for coffins and expensive burial rituals.

The hardline roll-out of the policy — which is reportedly being executed to adopt more “eco-friendly” practices but observers suggest is a bid to preserve land space — has even drawn rebuke from Beijing state media as “barbaric”.

After being seized, the coffins were placed side by side and smashed to pieces using excavators.

‘Is there any reason to take barbaric means?’: state media

PHOTO: Families who voluntarily gave up their coffins received compensation, but those who resisted received no money. (Weibo)

Elderly people in many villages in the province store their coffins in their homes, believing that they will be rewarded with a longer life the earlier they prepare, the state-owned Global Times newspaper reported.

Some old people even tried to climb inside their coffins in an effort to stop them being taken away.

PHOTO: There has been opposition to the policy, which authorities announced six months ago. (Weibo)

Authorities in Jiangxi have been conducting a campaign against burials since April this year.

The Global Times said Jiangxi authorities collected more than 5,000 coffins last month, however other reports said tens of thousands had been confiscated since the beginning of the policy.

At least one body was even exhumed in one county after being buried in violation of the policy, the South China Morning Post reported. 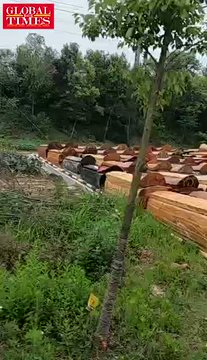 Hundreds of coffins were gathered in a parking lot in East China’s Jiangxi Province. Starting at the end of June, villagers in the province turned over 5,000 coffins in a controversial campaign to dissuade locals from traditional burials and promote cremation.8:00 PM – Jul 30, 2018

Families who voluntarily gave up their coffins received compensation, but those who resisted received no money and could even face fines.

Reports from earlier this year suggested the amount in compensation was less than what many paid for the caskets.

The People’s Daily, the Chinese Communist Party’s official mouthpiece, this week criticised the way the Jiangxi Government was pursuing the policy.

The editorial has since been removed from the paper’s website, but remains on other Chinese news sites.

“Is there any reason to take rough and even barbaric means?” the newspaper said.

“It ruins the image of authorities, and even provokes public grievances and anger.”

An article published today in Beijing News suggested authorities in the province would continue with the policy, but would not take coffins by force.

“The staff of the Yifeng County Office of Funeral Reform said that if people were not willing to hand over the coffins, then the government would not force them, but they cannot be compensated accordingly,” the article said.

“If you don’t hand over the coffin, there is no way to use it in the future.”

It is not the first time this year authorities have attempted to intervene in funeral rituals in rural China.

In February, China’s Ministry of Culture announced it was cracking down on the practice of hiring strippers as entertainment at funerals, a technique some families use to increase the number of mourners.

PHOTO: A copy of the “zero burial” policy order as issued by the People’s Government of Jiangxi Province. (Jiangxi Government)
By Michael Walsh and Jason Fan
ABC