Scott Morrison never mentioned China by name, but his meaning was unmistakeable.

At a business dinner in Vietnam last night, the Prime Minister took a thinly veiled swipe at China’s actions in the South China Sea.

“We share a vision for an open, inclusive and prosperous Indo-Pacific neighbourhood,” Mr Morrison told the audience of 100 business leaders and diplomats.

“An Indo-Pacific where we respect each other’s sovereignty and independence because if we allow the sovereignty or independence of any of our neighbours to suffer coercion, then we are all diminished.”

The key word there, coercion, had popped up earlier in the speech as well, as Mr Morrison described Australia and Vietnam as “partners for a stable, peaceful, prosperous and independent Indo-Pacific region”.

“A region of sovereign, independent states, resistant to coercion but open to engagement on the basis of shared interests,” he said.

The Prime Minister’s choice of words was a clear signal.

Other nations, most notably the United States, have accused China of engaging in “coercion” and “intimidation” in the South China Sea with its repeated intrusions into disputed waters.

Vietnam is at the epicentre of that argument.

For the last month, Chinese ships have been entering Vietnam’s economic exclusion zone near an area called the Vanguard Bank, at the southern edge of the sea.

Vietnam responded by placing a military vessel in the region.

It’s not alone. China has also intruded on Philippine waters and claims historic rights to areas held by Taiwan, Malaysia, Indonesia and Brunei.

The International Court of Arbitration has declared China’s claims invalid.

Mr Morrison is walking a dangerous diplomatic tightrope. While quietly working to build on Australia’s ties to “free” nations in southeast Asia, he must also be conscious of our important trade relationship with China. Hence the reluctance to call it out by name.

The United States has no such qualms.

“(China’s) efforts to assert its unlawful South China Sea maritime claims, including the use of maritime militia to intimidate, coerce and threaten other nations, undermine the peace and security of the region,” the US State Department has said of China’s incursions into the disputed waters near Vietnam.

“The United States firmly opposes coercion and intimidation by any claimant to assert its territorial or maritime claims.

“China should cease its bullying behaviour and refrain from engaging in this type of provocative and destabilising activity.”

IndoPacific_SCS_Info@IndoPac_InfoReplying to @IndoPac_Info
#Vietnamese fishermen took this picture of the #Chinese survey ship Haiyang Dizhi 8 and one of its escort ships at #VanguardBank. The Chinese ships continue to operate in #Vietnam‘s jurisdictional waters. 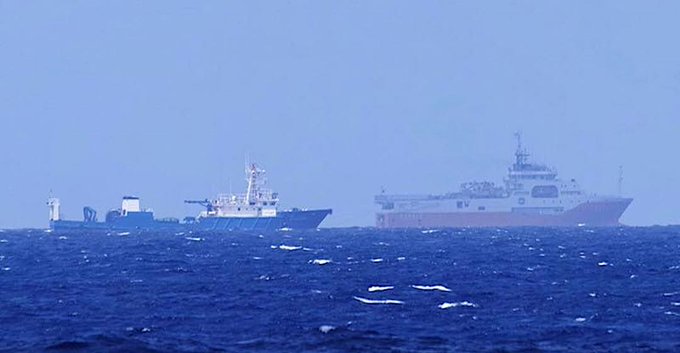 IndoPacific_SCS_Info@IndoPac_Info#SouthChinaSea maps showing the claims and facilities of each country.

Back in 2014, China moved an oil rig into Vietnamese waters, provoking weeks of angry protests across the country.

Now the situation is deteriorating again, and Mr Morrison has flown right into the thick of it.

“The ball is in China’s court and Morrison’s going to be in Hanoi in the centre of it,” UNSW Canberra emeritus professor Carl Thayer told AAP yesterday.

“What happens if China provokes an incident as a way of warning off Australia and Vietnam simultaneously?”

But Mr Morrison has every reason to be in Vietnam. He is, in fact, the first Australian prime minister to make a stand-alone trip to the country since 1994.

Vietnam is one of our fastest growing trade partners, second only to India. Two-way trade between Australia and Vietnam has grown by almost 11 per cent per annum over the last five years, reaching a whopping $14.5 billion in 2018.

That increasingly important economic relationship will be Mr Morrison’s main focus in Hanoi, where he will meet one-on-one with Prime Minister Nguyen Xuan Phuc today.

It was also the main point of his speech last night.

“Here we are, two different societies; two different political systems; two nations who were once in terrible conflict but who now work together on so many fronts,” Mr Morrison said.

He said Australia and Vietnam worked together to create “the world’s most consequential trade agreement in two decades”, the Trans-Pacific Partnership — a feat only made more impressive by the United States pulling out.

“We’re at a sweet spot in our partnership. Vietnam is rapidly industrialising and developing, and Australia is willing and able to support that growth,” he said.

“Our two economies are complementary ― I believe we can and will prosper together.

“The capacity for Australia and Vietnam to work even more closely together is enormous.”

Senior diplomat warns China is the “challenge of our age”

Chinese in Australia editor - March 4, 2020
0
The number of confirmed coronavirus cases in Australia has risen to 38 on Tuesday, up from 33 with four new cases in NSW and one in QLD.

Lifestyle editor - July 1, 2017
0
Many Australians are rather proud of our "democracy", but how much more democratic than China are we really?Colin Cook considers. THE DEMONISATION of China in...

Chinese in Australia editor - July 21, 2018
0
Like many people around the world, citizens in China are now getting much of their news from social media instead of traditional news outlets. Key...

Australia politics editor - April 22, 2020
0
The Chinese embassy in Canberra has accused Home Affairs Minister Peter Dutton of being a mouthpiece for the United States, in a withering criticism describing calls by Australian politicians for greater scrutiny of China's handling of the coronavirus crisis as "pitiful".

Melbourne editor - July 12, 2017
0
The heavily-indebted Chinese owner of Darwin Port, who is struggling to make payments on money borrowed to pay for the port lease, is offloading...

Business editor - January 16, 2019
0
Australia's dependence on Chinese money has been a blessing for the local economy, but it could unravel painfully if China's economic slowdown worsens.