AUSTRALIA’s Chinese visitor boom has shown the first signs of waning with numbers going backwards in the March quarter.

The latest International Visitor Survey by Tourism Research Australia (TRA) recorded a four per cent drop in Chinese visitors and a more worrying 14 per cent plunge in spending.

It was the first quarter of negative growth in the Chinese visitor market since 2010, despite Lunar New Year celebrations falling within the period.

TRA attributed the decline to a 15 per cent fall in group tours from China — which was partially countered by an increase in non-group tours.

Chinese travellers are moving away from group tours to go it alone in Australia. Picture: Brian CasseySource:News Corp Australia

“Previously Chinese tourists didn’t have a lot of experience in travel abroad, so the easiest, safest and most economical thing to do was to be part of a group,” said Mr Johnson, managing director of Cross Border Management.

“As they’ve become more sophisticated and more wealthy, more and more are going by themselves.” 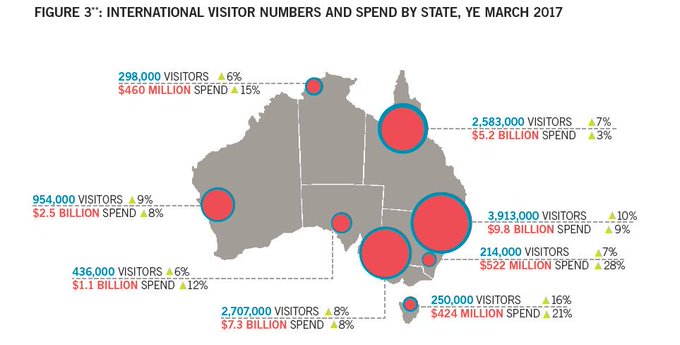 Tourism Australia Managing Director John O’Sullivan said the shift in the market was not unexpected.

“We’ve been talking for some time now about how the Chinese inbound market is changing and this move away from traditional group tours towards free and independent travel,” Mr O’Sullivan said.

“We saw this over Lunar New Year with those tourism operators more reliant upon group tours telling us business was flat, while those targeting the free and independent travel market reporting strong growth.”

Tourism was all about adapting to change, he said.

“We would naturally expect some rebalancing as this shift continues but the long game is undoubtedly targeting China’s emerged and emerging middle class consumer with the means and the appetite for overseas travel,” said Mr O’Sullivan.

Year on year, Chinese visitor numbers were up ten per cent but spending was down three per cent.

China remained Australia’s second biggest source of visitors after New Zealand; the US was third followed by the UK and Japan.

In total, Australia welcomed 7.7 million visitors in the year to March, up nine per cent on the previous year.

Mr Johnson said the change in the way Chinese people holidayed in Australia presented good opportunities for operators who may not have been part of group tour itineraries.

“The other really big opportunity is that Chinese tourists crave novelty and anything that’s new or interesting or off the beaten path,” Mr Johnson said.

“We’ll be seeing more Chinese tourists going to Uluru and places like the Daintree that are off the beaten path, but were not so easy for group tours to access.”

Data provided by TRA, showed Queensland was the only state where more Chinese visitors still travelled in tour groups rather than individually.

Similarly, in New South Wales Chinese visitors travelling in tour groups went from 48.4 per cent to 38.5 per cent in the same period, and in Victoria the proportion sank from 40.9 per cent to 33.

Business editor - July 10, 2017
0
As the US under Donald Trump is pulling back from international economic leadership, China’s business culture is advancing to fill the gap, according to...

Immigration editor - August 30, 2017
0
Six Chinese men have successfully landed on Australian territory by boat, in an apparent blow to the Turnbull government's claims to have stopped the boats.

Business editor - February 27, 2019
0
Last week vitamin company Blackmores lost 24 per cent of its sharemarket value in one day. On Tuesday it lost its chief executive Richard Henfrey and its ability to tell investors why he had gone.

Business editor - September 12, 2017
0
The world's largest car market, China, has indicated it will follow countries like France and Britain in moving to ban the sale of new...

No middle way for Australia to be in a complaint relationship...