A Chinese envoy to the Pacific Islands Forum was “insolent” and a “bully” for speaking out of turn during a leaders’ meeting, the president of host nation Nauru has said following a fiery exchange that exposed underlying tensions over China’s influence in the region, and threatened to derail the annual leaders’ summit.

Nauru is hosting leaders of 18 Pacific nations, plus delegations from non-member countries including the US and China, at a time of growing rivalry in a strategically important region with access to swathes of resource-rich ocean.

“The Chinese demanded to be heard when [Tuvalu’s] prime minister was about to speak,” Nauru president Baron Waqa said at a news conference late on Tuesday, after media reported a heated start to the leaders’ closed-door meeting. 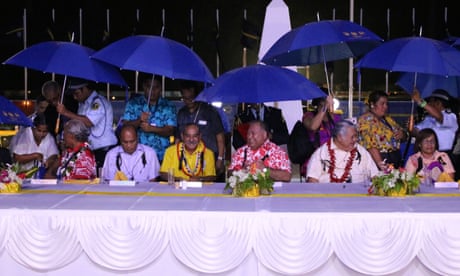 “He insisted and was very insolent about it, and created a big fuss and held up the meeting of leaders for a good number of minutes when he was only an official. So maybe because he was from a big country he wanted to bully us,” Waqa said.

Conflicting versions of the events in the closed-door meeting have highlighted the sensitivity around China’s presence at the meeting, and its growing influence across the Pacific.

One source who was present told The Guardian the Chinese delegate had waited patiently, signalling that he wished to speak, but was ignored by other attendees.

“Finally, he was fuming, shouted at them very loudly and angrily, stood up and stormed out, but instead of heading for the nearest exit, he did a lap of the whole conference table to indicate his fury with each person.”

The treatment of the Chinese delegate was seen as a deliberate and public humiliation, the source said, and a reflection of Pacific suspicions about Chinese intent in the region.

Another forum source told The Guardian the Chinese delegates wanted to take part in a leaders-only meeting, despite not sending any delegates higher ranking than an “special envoy”.

The source said the delegates were interrupting the leaders, in what he described as a serious incident which held up the meeting for 15 minutes and resulted in the Nauruan president threatening to evict them.

Nauru and Tuvalu are two of six Pacific countries to have diplomatic ties with Taiwan, another major source of tension with China, which regards Taiwan as a wayward province, to be taken back by force if necessary.

Taiwan has sought to keep Nauru close through financial largesse.

US diplomatic cables leaked to Wikileaks revealed Taiwan was paying Nauruan government ministers a secret $5,000 monthly stipend in exchange for continuing relations. Other MPs received $2,500 a month. The money was described as “project funding that requires minimal accounting”. Taiwan paid for much of the infrastructure being used at this week’s forum.

China’s foreign ministry did not immediately respond to a request for comment about the confrontation. China’s delegation was led by Du Qiwen, its ambassador to Fiji.

Waqa said protocol dictated speaking priority was given to ministers over diplomats. Video of the confrontation shows him telling the Chinese delegate “you are addressing ministers here, show some respect”.

Later, Waqa said the Chinese official had attempted to “bully” the meeting.

China has become one of the dominant economic players in the Pacific, spending billions of dollars in trade, investment, aid and tourism in a region that staunch US ally Australia has long regarded as its “back yard”. China is now the second-largest bilateral donor in the region, behind Australia, which has reiterated publicly it wishes to remain the most influential power in the region, and the “partner of choice” for development projects.

Nauru has no diplomatic relations with China.

The meeting was the second conflagration between the tiny island state of Nauru and global superpower China, after a visa row almost derailed the entire meeting.

By Ben Doherty and Helen Davidson
The Guardian

Immigration editor - June 5, 2017
0
Last month eight of Australia’s top journalists visited China for a week as guests of the Australia-China Relations Institute (ACRI) at the University of Technology Sydney (UTS). They were greeted by top Communist Party officials and toured some of China’s new infrastructure projects.

Immigration editor - December 4, 2018
0
China is increasing the use of exit bans to prevent foreign visitors, including Australians, from leaving the country even if they are only related to someone involved in a legal dispute or wanted by the authorities.

Chinese in Australia editor - August 4, 2017
0
Racist graffiti targeting Chinese students has prompted anger after it was found at two locations in an Australian university. The words "kill Chinese" were inscribed...

Chinese in Australia editor - September 25, 2017
0
Despite reports indicating Chinese students are turning their back on studying in Australia, Lord Mayor Graham Quirk says Brisbane has nothing to be concerned...

‘Tear it down’: PM lays into TikTok after ‘harmful’ video goes viral

Chinese in Australia editor - September 10, 2020
0
Prime Minister Scott Morrison says he has a “serious concern” over the safety of children on social media after a “disgraceful” video went viral this week on TikTok.

Chinese in Australia editor - July 23, 2018
0
A famous Chinese billionaire who became entangled in a rape trial after a guest to his Sydney penthouse dinner party was accused of sexually...