Prime Minister Scott Morrison and the Coalition Government have been targeted by online propaganda coming from social media accounts affiliated with the Chinese Communist Party (CCP).

The findings come from a paper, prepared by cyber propaganda researchers Dr Michael Jensen, Dr Titus Chen and Tom Sear, which will be delivered to the Safeguarding Australia Summit in Canberra today.

“Our evidence suggests that accounts aligned more closely with the Government in Beijing have a clear anti-Liberal (Government) story coming out of them,” said Dr Jensen, a senior research fellow at the University of Canberra’s Institute for Governance and Policy Analysis.

Across a period of five months from November 2018 to March 2019, the researchers analysed the Australian content on 47 of the most visited WeChat Official accounts in mainland China, 29 of which were aligned with the CCP.

‘Cosying up to China?’

The three academics said there was a clear bias shown against the Liberal Government.

How are you being targeted this election?

“The top topic in articles mentioning Australia was the criticism of the Liberal Government and specifically Scott Morrison,” Dr Jensen said.

One post from February mocked the Prime Minister for joining WeChat in the lead-up to the election campaign.

“There is a country whose head has been kicked hard by kangaroos, and now seeks to befriend us,” a post by commercial media site Tiexue Junshi said.

The site, which is 1.5 per cent owned by Chinese state media, targeted the timing of Mr Morrison’s take-up of WeChat. 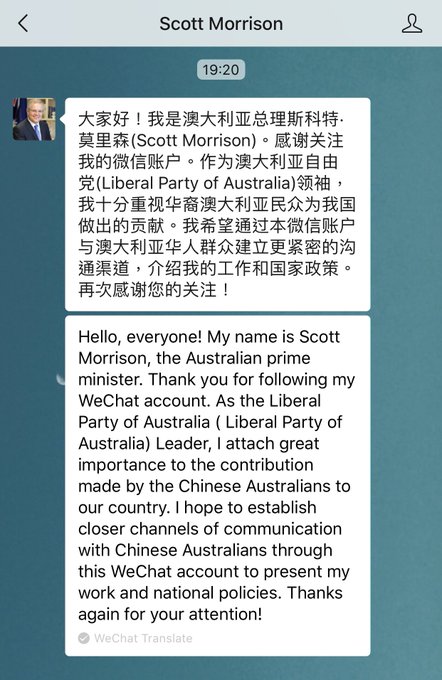 “What the Australian Prime Minister Morrison is doing is nothing more than to win over the support of the Chinese in Australia.”

When contacted, Mr Morrison’s office said: “We don’t have anything to add.”

The researchers say there is little evidence of attacks on Bill Shorten and the Labor Party across their dataset.

This may have something to do with the policy decisions relating to China made by the Liberal party in its last term, and that the CCP may not be keen to mention that other countries actually have opposition parties.

The content studied by the researchers is different from the scare campaigns spreading in WeChat closed groups targeting Chinese-Australian voters.

However, it is possible that some of the anti-Liberal Government propaganda generated in China could be shared inside closed groups away from the scrutiny of researchers.

The WeChat data sourced for today’s speech was gathered from a five-month period before Mr Morrison called the election and just after the Coalition government under Malcolm Turnbull caused anger in Beijing by banning Huawei from any role in building Australia’s 5G network and for introducing laws relating to foreign interference.

Global Times is a state-run tabloid. In this post they are criticising alleged sexism.

Dr Chen, an Associate Professor at the National Sun Yat-Sen University in Taiwan, said a range of criticisms came up in the data.

“The Liberal Government has been criticised harshly for siding with Washington, for joining Five Eyes,” he said.

Five Eyes is an intelligence-sharing alliance made up of the United States of America, Australia, Canada, New Zealand and the United Kingdom.

“Canberra has been criticised for the so-called anti-China migrants’ policies, especially the rich immigrants that are involved in Australian politics [and] the way the media portrayed the Huang Xiangmo case,” Dr Chen said.

“I do not think these WeChat criticisms against the Australian Government are related to the coming elections … it was already there last October or November.

“The criticism targeted the Liberals and the Liberal Government, and its leadership. So, it first targeted Turnbull and then when he stepped down, it targeted Morrison.”

Chinese-Australian voters are being targeted by a scare campaign that claims there would be an influx of more than a million refugees in 10 years if a Labor government was elected.

Co-author of the paper Tom Sear, who is an Industry Fellow at UNSW Canberra Cyber, said the mentioning of Five Eyes in the WeChat posts could be part of a campaign by China to manipulate public opinion.

“Disintegrating the unity of the Five Eyes is likely to be a strategy of the Chinese Government and Australia is vulnerable because we have an asymmetrical relationship between who is our economic partner and who is our strategic partner,” he said.

“I wouldn’t necessarily say that regulation is the answer, but we need to start having this discussion,” he said.

“In an era of persistent cyber conflict, democracies like Australia need to think very seriously about how we might collectively as a community work, not only with WeChat, but with all social media.”

Australia Is Having a Strategic Revolution, and It’s All About China

China Australia: A marriage of more than convenience

Business editor - June 22, 2017
0
The mutual dependency is undeniable: China has been Australia’s largest trading partner since 2010. Total two-way trade in the 2016 fiscal year was $A150 billion; Australian exports to China were $A86 billion.

Australians in China editor - September 10, 2017
0
YOU might not recognise her, but Amy Lyons is a big deal in China. The 24-year-old Sydney native is living it up as a social media influencer in Beijing.

Are Australian universities putting our national security at risk by working with China?

Chinese in Australia editor - October 19, 2019
0
Leading Australian universities have research collaborations with Chinese companies that have been blacklisted by the US.

Business editor - June 16, 2020
0
Australia’s foreign minister has accused China of spreading disinformation that “contributes to a climate of fear and division” while declaring Canberra would take a more active role in global bodies.

Australia’s population to hit 25 million, newest resident likely to be young, female and...

Chinese in Australia editor - August 7, 2018
0
Australia's population will hit the 25 million mark later tonight according to projections from the Australian Bureau of Statistics (ABS), a milestone reached in...

Business editor - June 22, 2017
0
Chinese investors and companies remain eager to invest in Australian agriculture, with vineyards, dairy and aquaculture named yesterday as the most popular sectors. The Agri-Investor...

Chinese in Australia editor - September 21, 2018
0
The rest of the world is watching how we counter Beijing’s campaign of influence It’s no secret that Professor Francis Fukuyama got it wrong in...

Chinese in Australia editor - January 24, 2019
0
A Chinese-Australian writer who went missing after arriving at Guangzhou airport last week has been detained by Chinese authorities, according to the Australian embassy...

‘The fear is real’: Chinese students in Australia dread reprisal from...