Two outspoken Liberal politicians have been barred entry into China but deny it is a reflection on the Federal Government.

West Australian MP Andrew Hastie and Victorian Senator James Paterson were due to take part in a study tour to Beijing next month.

But when the tour operator called the Chinese Embassy to arrange their visas, it was told the pair were “unwelcome at this time”.

“I think we’ve been banned from travelling to China largely because we’ve been outspoken about the Chinese Communist Party and we’ve been vocal on human rights issues,” he said.

“We’ve spoken for the Uyghur people in Xinjiang province, we’ve spoken for Dr Hengjun, an Australian citizen still in detention, we’ve also spoken with deep concern about the process in Hong Kong.”

He insisted it was not an indication that relations between Beijing and Canberra have hit a new low.

“I don’t think it reflects on the Government at all,” he said.

“We’re both backbenchers so the things we say aren’t necessarily the views of the Government and that’s clear.” 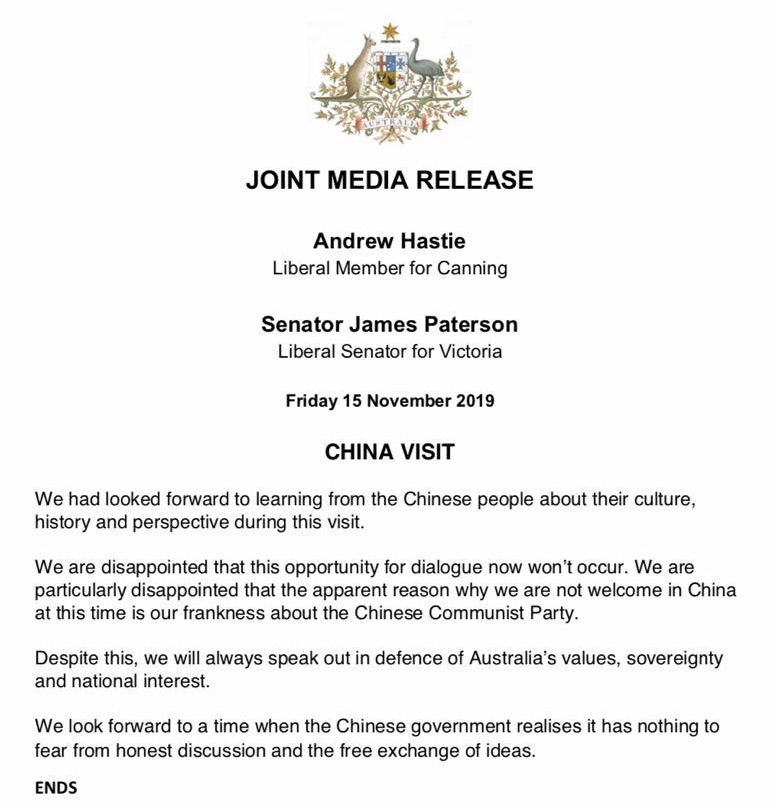 Instead, he argued Beijing is just making perfectly plain where it stands.

“At least we now know that if you make criticism of the regime it could cost you a visa,” he said.

“I think relationships are always best when we’re honest with each other and I take this as them being somewhat honest about the situation.

“I’ve been fairly frank myself over the past few months and I’m not going to resile from my position just to get a visa,” he said.

The China policy think tank had invited Mr Hastie and his Liberal colleague James Paterson to travel to Beijing as part of December’s planned study tour, along with Labor MP Matt Keogh.

“I don’t have any detail as to why China has refused to issue visas in these circumstances, but given the recent media coverage of the commentary coming from Mr Hastie and other members of the Government backbench in respect to Australia’s relationship with China … I suspect that has played into it,” he said.

The chief executive of China Matters, Alistair Nicholas, said he did not think the main problem was the Liberal politician’s previous criticism of China.

The bitter reality on China

The almost-predictable public outcry over Andrew Hastie’s column on China’s rise all but extinguished any discussion of the strategic argument the Liberal MP was attempting, but will the growing likelihood of a crackdown on protesters in Hong Kong break the Australian Government out of its torpor?

He instead blamed media reports ahead of the trip that named the politicians who would be going along.

“On all of our visits we encourage the participants to raise any questions, discuss anything they would like to discuss and on past visits we have been able to discuss everything from the situation with the Uyghurs in Xinjiang to the protest in Hong Kong without any issues,” he said.

“So I don’t think it is to do with the subject material that might be raised in China at all.

“Our understanding is that it was all about that we had this media attention to the visit before we had even gone to China.”

He hoped they might be able to reschedule the trip for a future date.

Senator Paterson said he and Mr Hastie had no plans to cause trouble.

“Our intention was to engage in good-faith dialogue and learn more about China and the Chinese people’s perspective on the world and that’s what we hoped we would get out of the program,” he said.

“We certainly weren’t planning on doing anything other than representing our points of view and hearing theirs.”

Senator Paterson said if the pair had been given the chance to have frank conversations it might have enhanced their understanding of China.

“But we’ve now been denied that opportunity and I think that’s a shame.”

Chinese in Australia editor - October 31, 2018
0
A growing number of Chinese military scientists are using their research collaborations with Western universities to take their host country's expertise back home to...

Business editor - September 6, 2017
0
The Australian Securities Exchange has issued a "please explain" letter to 50 Chinese companies listed on the local bourse regarding any problems they may have with capital flow in and out of China.

Australia politics editor - June 4, 2019
0
Author Clive Hamilton has launched a Chinese-language edition of his controversial book Silent Invasion to coincide with the 30th anniversary of the Tiananmen Square massacre.

Business editor - August 3, 2017
0
WA’s lucrative rock lobster industry has left itself dangerously exposed to the Chinese market, according to a report which warns that operators could be...

Record migration to Melbourne is changing the face of our city

Chinese in Australia editor - July 11, 2017
0
MIGRANTS now comprise up to 80 per cent of residents in some Melbourne suburbs as the city continues to be transformed by a record...

Chinese developers ‘walking away’ from Australian projects amid lack of finance

Travel editor - July 13, 2017
0
YEARS of backroom lobbying by the current and former governments could see direct flights from China landing in Darwin within months. The Chinese Civil Aviation...

Rio Tinto agrees to sell Australian coal unit to China’s Yancoal for $3.2b

Business editor - January 24, 2017
0
Global miner Rio Tinto has cut a deal to sell its Australian coal assets to China's Yancoal for $3.2 billion — if the sale...

Chinese in Australia editor - October 8, 2018
0
Chinese investment into Australia slumped 40 per cent last year, twice the drop worldwide, according to new figures, which highlight the impact of Beijing's crackdown on trophy acquisitions

Australia politics editor - May 23, 2020
0
Sky News host Peta Credlin says at a time when China is "attacking the livelihoods" of Victoria's barley farmers and sabotaging the national economy the state is "cuddling up to China in the hope of getting access to cheap money".

Business editor - September 12, 2017
0
MORE northern produce and wine could soon be hitting shelves across the world following talks last week between local companies and a delegate of...