If ever a relationship was conducted in a house of smoke and mirrors, it is the China-Australia one.

The mutual dependency is undeniable: China has been Australia’s largest trading partner since 2010. Total two-way trade in the 2016 fiscal year was $A150 billion; Australian exports to China were $A86 billion.

While Australia cannot provide more than a slice of China’s commodity needs, it is a vital resource.

These are big numbers but the perception is they are even bigger. For many Australians, drawing on the political posturing, media coverage and preconceptions, China is buying up Australia.

The reality is China’s investment, while it has grown from 9th to 5th overall since 2010, is still dwarfed by the US, Japan and the UK. Even the Netherlands has more investment in Australia than China.

Meanwhile, the perception the other way is Chinese investment is unwelcome in Australia. Again the reality is 99 per cent of proposals put to the Foreign Investment Review Board are approved.

At June’s annual Australia China Business Council networking event at Parliament House in Canberra the relationship was put on the couch. Both partners raised some issues.

The Chinese Ambassador to Australia, Cheng Jingye, lamented on the day recent analysis of Chinese influence in the Australia, across the media, politics and student life, were “last night’s rice reheated”. The Australian marketing officer for a Chinese airline complained at length about how Chinese tourists were treated at Sydney airport.

Political and military tensions in the South China Sea were raised and at the same time reports emerged of Australian prime minister Malcolm Turnbull describing China as a “frenemy”.

The fundamental question is whether the Australia-China relationship is robust enough to survive these tiffs. The old heteronormative line of men being from Mars and women from Venus can readily be stretched to describe how a brawling western democracy might interact with a far larger and increasingly assertive eastern one party state.

This is not going to be an easy relationship but inevitably it is going to be a long term one. What is often missed in the perception created around day to day media coverage, which will always focus on a major moment, whether a milestone like the China Australia Free Trade Agreement or a contretemps like alleged influence peddling, is the ongoing deepening of the relationship.

ANZ’s latest insight report, Now for Investment: Looking beyond Trade in the China-Australia Free-Trade Agreement, reveals the bilateral relationship is already benefiting from the agreement in often surprising ways, for example in the construction sector with CCCC International’s acquisition of John Holland.

That increased demand for services and other consumption-based products in turn also requires further investment to scale up Australian industries to meet these opportunities. 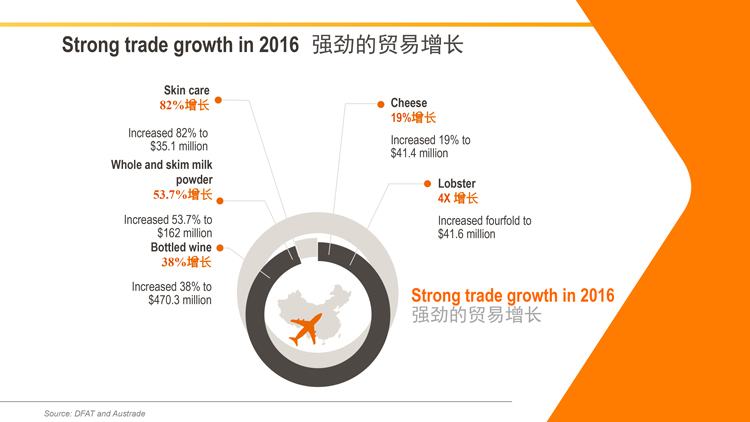 This is reflected in the shifting nature of Chinese investment into Australia with the top three investment targets in 2016 being commercial real estate, infrastructure and healthcare.

According to the Australian Department of Foreign Affairs and Trade and Austrade in 2016 skincare product sales grew 82 per cent to $A35 million, whole and skim milk powder 54 per cent to $A162 million and – for those who thought it was all about milk – wine 38 per cent to $A470 million.

The list of China-Australia investment stories outside of the traditional resources continues to grow, including the New Hope purchase of Kilcoy Pastoral, COFCO of Tully Sugar and Bright Food of Manassen Foods.

Speaking at the ACBC day, Australian foreign minister Julie Bishop drew attention to the new Colombo Plan which educates foreign students in Australia and over the years has paid enormous dividends by way of greater understanding as these students returned to positions of influence in their home countries. One fifth of applications today are from China.

She noted this year alone 1.4 million Chinese will visit Australia while more than 500,000 Australia citizens will head to China.

The cumulative impact of this investment and what is often called ‘soft power’ – cultural exchange – is bringing Australia and China together. And that’s not to gloss over the still enormous cultural, political and public differences.

But ACBC chairman and former Victorian premier John Brumby perhaps captured the nuance the best as he addressed questions around the perceptions of rising tensions.

“I would be careful not to put these things out of context, the world is a very tumultuous place, but I would say a lot of what we see is background noise,” he noted, adding the differences should not be allowed to impact on “a deep and fruitful relationship”.

Brumby made the point he had been around the block a few times in his political career and tension and differences of opinion were inevitable. Before China the debate was over Japan, even the US. The key was to recognise and develop areas of mutual interest, he said.

What is indisputable is the Australia-China relationship, especially economically, is of mutual interest.

Melbourne editor - September 15, 2017
0
Melbourne has cemented its status as most popular city in Australia for Chinese buyers of residential real estate, two sets of new figures show. The...

China restricts Australian coal imports at its ports in a bid to boost domestic...

Business editor - February 18, 2019
0
Dozens of vessels carrying Australian coal continue to be in limbo off the coast of China as restrictions on imports are introduced at key...

Chinese in Australia editor - January 26, 2019
0
Australian diplomats have visited the detained Australian blogger Yang Hengjun, who is being held in residential detention in Beijing under investigation for involvement with...

News editor - August 1, 2017
0
Merriden Varrall, the director of the East Asia Program at the Lowy Institute, has penned an article in the New York Times warning about...

Business editor - May 26, 2017
0
Australia has been living off the Chinese genie that escaped from the bottle around 2000 and recreated itself as an economic super power. It triggered...

Are young Australians being turned off China as diplomatic ties grow frostier?

Australians in China editor - August 30, 2020
0
"Understanding China is so important to Australia's future, but it also helps you to develop as a person, you're not just studying a language, you're learning to look at the world in a different way."

Chinese in Australia editor - August 5, 2020
0
Chinese students in Australia are scared of speaking out about Hong Kong as the Chinese Communist Party ramps up new online portals for reporting dissent and UNSW is engulfed in controversy over academic freedom.

Chinese in Australia editor - October 3, 2019
0
A Victorian police station has been slammed for “honouring a police state” by flying the flag of the Chinese Communist regime.

China’s next five-year plan on the way and it is a big deal for...

Business editor - October 16, 2017
0
When the world's second largest economy sits down to reshuffle its leadership and map out an economic plan for the next five years it is a big deal.