The nation’s most powerful union leaders have exaggerated an “unlimited” surge of Chinese workers coming into Australia under a free-trade deal, with new figures revealing the flood they predicted has turned into a trickle.

The union campaign took the free-trade agreement to the brink of defeat in the Senate less than two years ago, amid dire warnings that new visa rules would allow Chinese companies to exploit an “immense loophole” to put Aust­ralians out of work.

But those fears have been debunked by official results showing a 15 per cent fall in the number of new visas granted to skilled foreign workers coming from China in the year after the trade deal took effect.

The results show just 2781 visas were granted to Chinese nationals in the first year after the China-Australia Free Trade Agreement came into effect, highlighting the flaws in a powerful union campaig­n that relied on alarming forecasts to put pressure on parliament.

While the Electrical Trades Union declared the trade deal would lead to “electrocution deaths” and “house fires” from the influx of foreign workers, the migratio­n figures show no significant shift in the number of electric­ians coming from China. Fewer than 15 general electricians from China were granted 457 skilled worker visas last year, the first full year after the trade deal came into force, and there have been only a handful of visas granted for carpenters and other key trades. 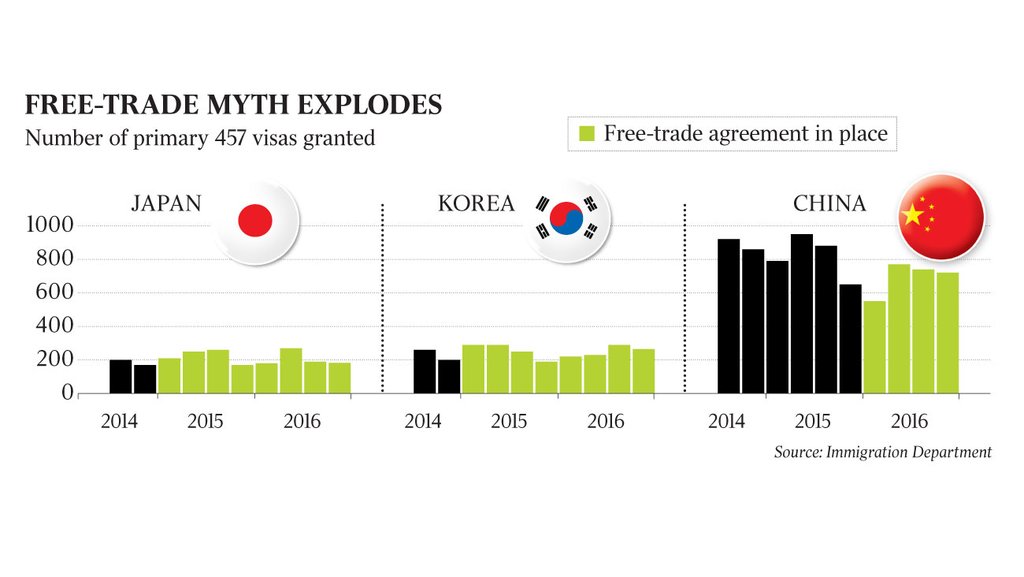 Then ACTU secretary Dave Oliver led the campaign against the trade deal with a “fact sheet” telling voters that Chinese companies would be able to “bring their own workforce” without testing the market for local workers.

“There is no doubt that removing mandatory skills assessments for Chinese applicants will result in increased numbers of 457 visa applications,” the unions warned.

The aggressive campaign included a television advertisement funded by the Construction Forestry Mining and Energy Union, where a father told his son the governmen­t had “stuffed it up” because­ Chinese companies would avoid Australian workers.

But the latest data shows the number of 457 visas granted to Chinese applicants fell from 3270 in the year before ChAFTA to 2781 in the first full year after the trade deal.

Rather than taking jobs from young workers with trade skills, the applicants were overwhelmingly managers and professionals, with only 18 per cent being classified as trades or technical workers.

The union movement applied immense pressure on Bill Shorten and Labor trade spokeswoman Penny Wong to vote down the enablin­g legislation for the trade deal in October 2015, as business leaders and the government warned against the “xenophobic” campaign.

While Labor secured some changes to the deal in negotiations with then trade minister Andrew Robb, including a minimum pay rate for 457 workers, it did not amend the legislation or put a constraint­ on visa applications.

ETU national secretary Allen Hicks attacked the caucus decis­ion to back the trade deal by claiming that an “unlimited number of Chinese workers” would come into the country.

CFMEU national secretary Micha­el O’Connor kept up the warnings about the trade deal during last year’s election campaign, insisting “there are a whole range of jobs that are under threat” from the Chinese agreement.

The union leaders aimed some of their fire at new investment facilitati­on arrangements between the federal government and Chin­ese companies for projects worth more than $150 million.

This, they warned, would lead to a flurry of special deals that would pay overseas workers less than Australians.

No IFAs have been struck since the trade deal came into force.

ACTU president Ged Kearney rejected the idea the unions misled people about the threat to jobs.

“While the union movement campaign against CHAFTA won some safeguards for local workers, the number of Chinese workers on all forms of temporary work visas has increased since CHAFTA, and we have seen reported instances of exploitation of these workers since this agreement came into force,” Ms Kearney said.

These figures include visas granted before CHAFTA took effect.

The rate of new visa applications being approved every month is seen as the accurate guide to ongoing trends and this number has fallen year-on-year since December 2015.

The ETU and the ACTU warned about the use of a different visa class – the 400 category – for temporary workers.

“Raw data from a single is not a reliable indicator of the long-term impact of a perpetual trade agreement,” said Mr Hicks of the ETU.

“The China-Australia trade agreement signed by Malcolm Turnbull bans our government from limiting the number of 457 visa workers from China at any point in the future, for any reason, in a range of professions. It will take several years to assess the lasting impact of those provisions.

“The use of subclass 400 visas is also particularly concerning as it has already enabled horrendous exploitation of workers. Within months of the agreement being signed media investigations revealed unqualified workers on exploitative wages working in unsafe conditions on Australian worksites who had been brought to our country under these subclass 400 provisions.”

The ETU statement is a reference to a Fairfax Media report last year about seven Chinese workers who came into Australia on subclass 400 visas to work on a carpark system imported from China. The 400 visa is for jobs of three to six months while the 457 scheme is for longer temporary work.

Mr O’Connor of the CFMEU did not respond to a request for comment.

Migration Council of Australia chief Carla Wilshire, who cautioned in October 2015 that the fears over CHAFTA were misplaced, said Australia should not undo programs that worked in the national interest.

“The CHAFTA debate show the importance of proper informed analysis. Migration is a intricate system and it’s interactions with our economy are complex and varied,” she said.

Mr Sherrell, who is now at the Crawford School at the ANU and was previously at the Migration Council of Australia and the Department of Immigration, said it was “too early to tell” how the full impact of CHAFTA may influence the number of skilled foreign workers from China.

Policy shifts over the past four weeks mean the 457 visa program will be completely overhauled and it will be impossible to judge whether changes in the flow of temporary workers from China can be laid at the door of CHAFTA or the subsequent reforms to the visa rules.

Bill Shorten announced last Wednesday that a Labor government would also tighten the rules with bigger application fees for applications and other reforms.

By David Crowe
The Australian

Business editor - July 26, 2017
0
China has temporarily banned beef exports from a number of Australian meatworks, the ABC understands. The Australian Meat Industry Council has confirmed it is working...

The Labor Party, Chinese property developer Huang Xiangmo, and the seat in the NSW...

Business editor - June 7, 2017
0
When Chinese President Xi Jinping came to power at the beginning of November 2012, one of the first things he did was announce a...

Chinese in Australia editor - January 12, 2019
0
Verbally abused and threatened in stores, Chinese personal shoppers — known as daigou — are feeling the brunt of what they claim are "biased"...

Business editor - September 6, 2017
0
The Australian Securities Exchange has issued a "please explain" letter to 50 Chinese companies listed on the local bourse regarding any problems they may have with capital flow in and out of China.

Australia calls for China to ‘play by the rules’ after reports of multibillion-dollar trade...

Australians in China editor - November 5, 2020
0
The Morrison government has called on China to come clean on whether a range of Australian export sectors worth billions of dollars a year will face new curbs from Friday amid increasing tensions between the two countries.

Education editor - June 19, 2018
0
The ACCC has warned Australia's Chinese community of a recurring scam that involves threats of arrest and extortion via fake kidnappings.

Chinatowns are dying: Why the Chinese centres of Australian cities are disappearing

Chinese in Australia editor - August 6, 2017
0
THE future of Sydney’s Chinatown hangs in the balance. And it’s not the only one. Chinatowns all over the world are disappearing. Our favourite place...