Asian countries are looking for catalysts beyond China to drive their economies as the Sino-U.S. trade war forces Chinese demand for their exports to shrink.

Luring foreign companies to their shores, finding ways to boost domestic consumption and scouring for alternate export markets are part of that policy mix as China’s neighbors cope with flagging demand from the mainland, hitherto a large market for Asia in the regional supply chain.

Malaysia set up a panel to fast-track investments to woo businesses, and said it approved more than $500 million in proposals this month. 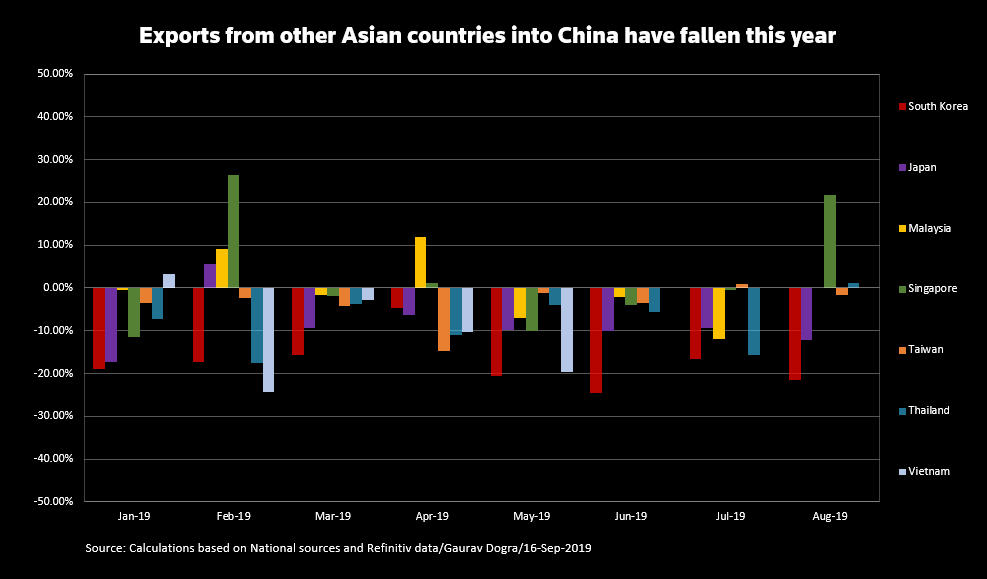 Exports to China from Asia have slowed this year, prompting the sellers to look for substitute markets. Japan and South Korea saw their exports to China fall in the first half, but their shipments to the United States, United Kingdom and Russia rose during that period.

Malaysia and Thailand’s exports to markets such as United States, Singapore and Vietnam grew.

“We have diversified our export destinations so we can cover the disappearing shipments to China or to America.” 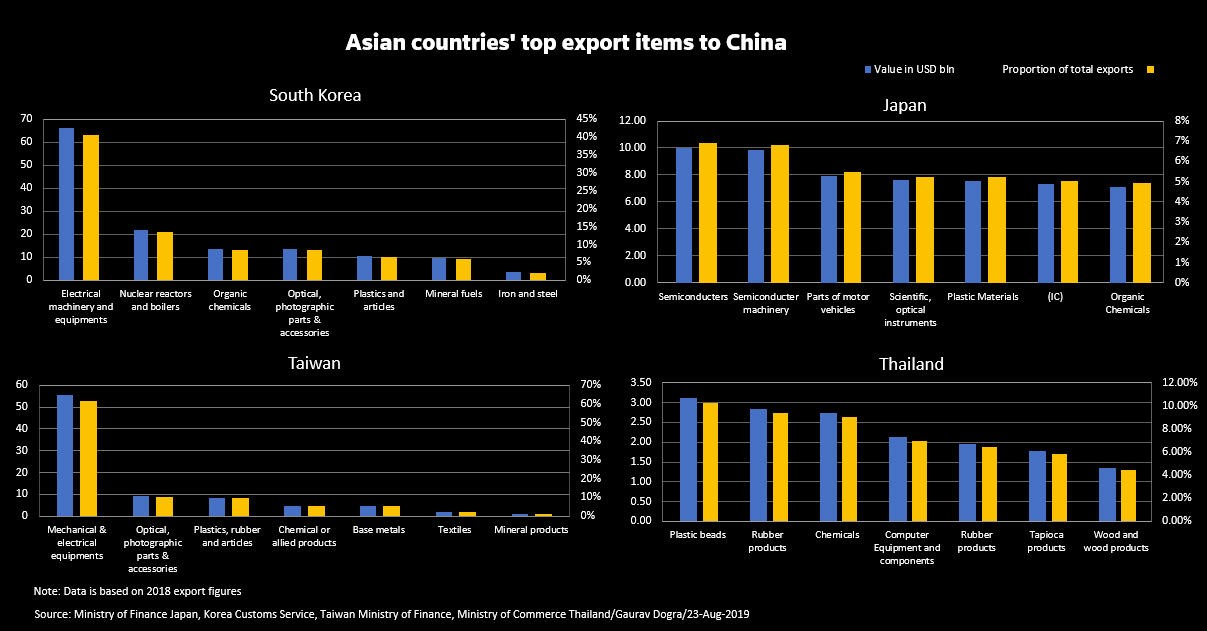 A Reuters analysis of eight major economies including South Korea, Indonesia and Taiwan showed the contribution of export revenue from China to the total GDP fell to 8% at the end of 2019’s first half, compared with 9.3% a year earlier.

(Graphic: Growth in Asia’s exports to China and rest of the World – here) 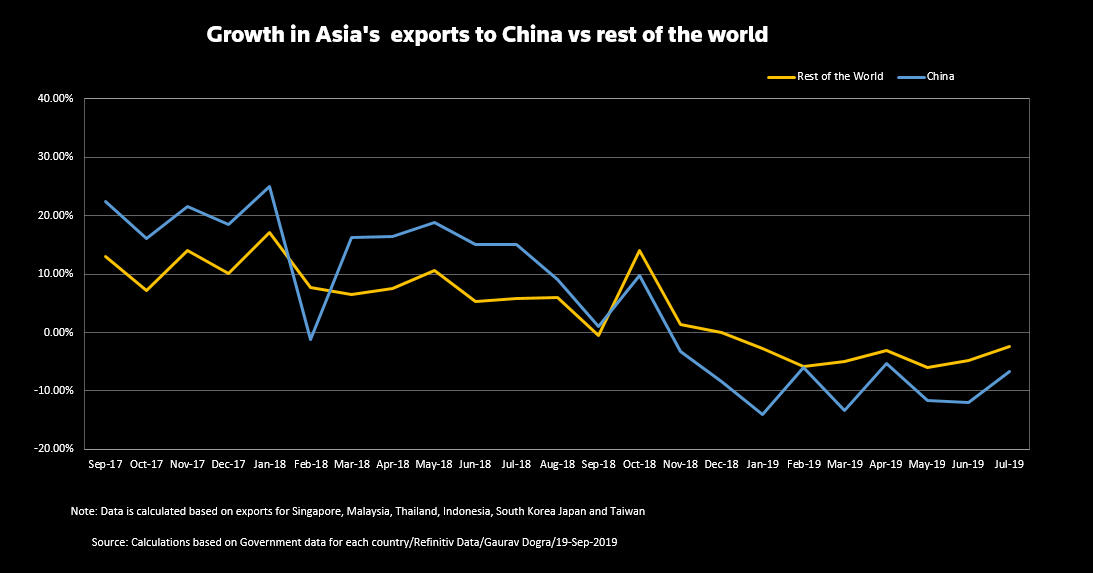 Malaysia’s economy saw solid growth of 4.9% in the second quarter, on the back of strong private consumption.

“Economic growth is showing signs of slowing in emerging Asia, partly due to trade tensions. However, domestic private consumption is holding up well,” OECD said in a July report.

A recent trend of Asian companies shutting factories in China and shifting them home would help lower their dependence on China, economists said.

According to a Nomura note this month , Taiwanese companies such as Flexium Interconnect (6269.TW) and Quanta Computer (2382.TW), South Korean firm SK Hynix (000660.KS) and Japanese firms such as Mitsubishi Electric (6503.T) and Toshiba Machine (6104.T) are looking to move production back to home from China.

Also, some U.S. and European companies are shifting their factories from China to other lower-cost countries such as Vietnam, Philippines and Cambodia.

German sportswear group Puma (PUMG.DE) has moved some of its production to Vietnam and Bangladesh from China, while U.S. retailers like Gap Inc (GPS.N), Steve Madden Ltd (SHOO.O) and Macy’s Inc (M.N) are also moving out of China.

India is targeting companies including Apple (AAPL.O), Foxconn (2354.TW) and Wilstrong Crop (3231.TW), according to a document seen by Reuters.

Foreign direct investment (FDI) has risen sharply in some of these low-cost markets in the region, bolstering their current account balances and helping give more room for their central banks to cut policy rates this year.

FDI into Vietnam climbed to $12 billion in the first eight months of 2019, from $11.25 billion a year earlier. Malaysia and Thailand have also seen an increase in FDI. 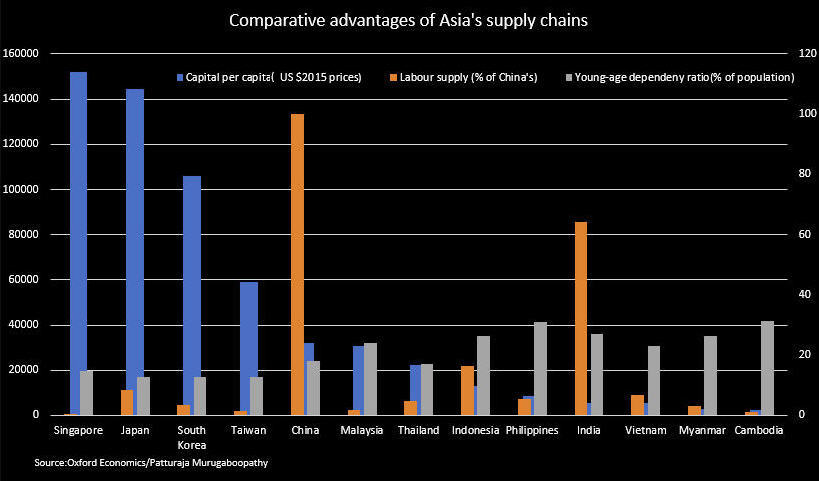 Tommy Wu, senior economist at Oxford Economics, said production processes that require high skills would move to economies such as South Korea and Taiwan while others would likely go to countries such as India and Vietnam.

“Even before the U.S-China trade war, a lot of companies had been looking to relocate due to rising production costs in China. But then, the U.S.-China trade war is a stimulating factor to speed up this whole process.”

China and India accuse each other of opening fire in fresh...

Thailand buys $530 million submarine from China, a move ‘opposed by...