North Korea tested a missile to test the Trump administration over the weekend — and it’s unclear if America’s leaders passed.

On Friday, Pyongyang tested a ballistic missile for the first time in well over a year. It significantly undercut what President Donald Trump considered his greatest accomplishment in months-long talks with North Korea: the end of weapons tests. While it was only a short-range missile that couldn’t reach the United States, it shows that North Korean leader Kim Jong Un’s patience with negotiations may be wearing thin.

The next day, Trump deescalated the situation by tweeting how he remains hopeful that Kim will choose to dismantle his nuclear arsenal, adding, “He also knows that I am with him.” That’s a far cry from Trump’s old threats to rain down “fire and fury” and “totally destroy” the country.

Then on Sunday, Secretary of State Mike Pompeo said North Korea’s test didn’t end the testing moratorium because it wasn’t an intercontinental ballistic missile (ICBM) that could hit America. In other words, what Kim did wasn’t great, but it won’t knock Washington and Pyongyang off the diplomatic path.

Put together, this weekend’s events show the limits of Trump’s personal diplomacy with Kim, and just how fragile the North Korea nuclear crisis really is. Even a small weapons test could have sent the Washington-Pyongyang relationship spiraling downward — and could have potentially kickstarted a war.

If you missed the mini-crisis because you wanted to actually enjoy your weekend, don’t worry. We’ve got you covered.

North Korea tested a weapon. It came with a message.

On Friday, South Korea’s military said that its northern neighbor launched a “missile” from Wonsan in the country’s east between 9:06 am and 9:27 am local time. Shortly after, though, Seoul revised its analysis to say Pyongyang set off “several projectiles,” thereby downgrading the kind of weapons that were used.

That wording matters greatly. The United States and North Korea are engaged in months-long negotiations over how to dismantle Pyongyang’s nuclear arsenal. Trump has repeatedly said that he’s fine with the protracted talks as long as Kim doesn’t test any more missiles, especially ones that can reach the US carrying a nuclear warhead. Kim’s last test of that kind came in November 2017.

So it seemed South Korea wanted to minimize what North Korea shot in order to keep the US, specifically Trump, from getting angry. But then North Korea released images of the multiple weapons it tested — and one of them was a short-range ballistic missile. In addition to that, North Korea’s state-run news agency said that Kim was there to witness the test. 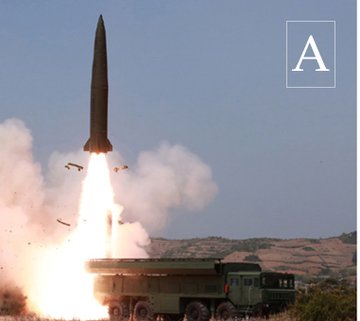 There was worry Friday night that Trump might decide Kim betrayed his trust, which could stall or completely halt the current diplomatic process. Kim had to know that testing a missile would certainly run that risk, so why did he do it?

First, Kim hoped that his talks with the US and South Korea would have paid off by now, but that hasn’t happened yet.

In February, Trump and Kim met in Vietnam to make a deal on ending North Korea’s nuclear and missile programs, but the summit ended early as both sides made demands the other couldn’t accept. Since then, talks have all but stalled and there has been little sign of progress. “It sounds like Kim wants Trump to get moving on US-North Korea issues, and he’s not being shy about it,” Grace Liu, a nuclear expert at the Middlebury Institute of International Studies, told me on Saturday.

Second, the US and South Korea are performed in joint military drills in the region, although they have scaled them down to avoid any tensions with the North. Pyongyang considers these drills to be nothing short of a thinly veiled prelude to invasion, and has historically reacted with shows of force. It’s very possible, then, that launching a few short-range projectiles was a pointed sign of displeasure.

“The move should not have come as such a surprise as North Korea had warned of possible reciprocal measures to actions by South Korea it felt had violated the spirit of the inter-Korean military agreements,” Jenny Town, a North Korea expert at the Stimson Center in Washington, told me.

It’s also possible that Kim was unhappy the US tested an ICBM of its own last week (officially unrelated to North Korea), which the autocrat might have viewed as a serious provocation and therefore decided to lash out.

Kim, then, used the missile test to make a statement. The question then became how Trump would react to it.

Trump isn’t known for his calm on Twitter. But with the state of US-North Korean relations on the line, he seemingly opted to lower tensions on Saturday morning.

DonaldTrump tweets, “Anything in this very interesting world is possible, but I believe that Kim Jong Un fully realizes the great economic potential of North Korea, & will do nothing to interfere or end it. He also knows that I am with him & does not want to break his promise to me. Deal will happen!”

That, frankly, was about the best anyone could’ve hoped for. Instead of escalating matters — like threatening to wipe North Korea off the face of the earth or even bragging about his big “Nuclear Button” — Trump committed to the diplomatic path and hoped that a “Deal will happen!”

One could almost hear the collective sighs of relief in Washington, Seoul, Tokyo, Beijing, and other major capitals. The tweet “suggests he is willing to look the other way for now,” says Vipin Narang, an expert on North Korea’s nuclear program at MIT. But he also noted that Trump’s “anything is possible” statement was ominous.

The problem for Trump is that one of his top aides flubbed the follow-up.

After Trump’s tweet, the secretary of state went on multiple Sunday news shows to discuss a range of national security issues facing the United States. Among the many questions he had to answer was what the administration thought of the North Korea missile test.

In response to Fox News’ Chris Wallace question about whether or not Kim ended the moratorium on missile tests, Pompeo said something surprising. “The moratorium was focused, very focused, on intercontinental missile systems, the ones that threaten the United States for sure,” the nation’s top diplomat said.

That, to put it mildly, is a loophole so large that Kim could shoot his biggest missile through it.

Pompeo is right to note that Kim vowed to stop testing ICBMs, although his regime also signaled that it might change course if the US and North Korea don’t strike a deal by year’s end. Technically, then, Kim didn’t violate his self-imposed moratorium. But Kim did cross Trump’s own red line of testing no missiles whatsoever while talks proceed.

Perhaps to square the circle, Pompeo says Kim’s test is fine with the Trump administration since it wasn’t an ICBM. And that’s potentially an issue: Experts now worry that he basically gave Kim the go-ahead to test any missile short of an ICBM from here on out.

“Even if internally the US administration accepted that the missile-testing moratorium applied only narrowly to ICBMs, as Kim has publicly stated, don’t say it,” Narang told me. “At least stick with the vague language of ‘long-range missiles’ to cover the weapons that threaten our forces and allies in the region.”

“The question will be whether this test was a one-off or whether it becomes a concerted effort to gradually escalate the range of missile tests through the end of the year to see how much Trump actually loves Kim,” he continued.

It’s therefore possible that in an effort to explain away how provocative Kim’s test really was, Pompeo opened the door for more provocative tests.

If that’s the case, this past weekend’s crisis may be the first of many in the months to come.

What’s behind the India-China border stand-off?

How China changed Hong Kong: views from the city

How China’s shaping one country’s future

Is the Japanese PM’s first overseas trip to Vietnam and Indonesia...

The country stuck between the US and China

Tonga called on Pacific islands to band together against China —...