For the first time in many years, Beijing’s Tiananmen Square was covered with red and white Japanese flags. Prime Minister Shinzo Abe had descended on China’s capital accompanied by several hundred Japanese businesspeople, eager to sign deals after years of hesitation.

A highlight of Abe’s trip, which began on Oct. 25, was a ceremony at Beijing’s Great Hall of the People celebrating the 40th anniversary of the 1978 Sino-Japanese peace and friendship treaty.

This year marks not only four decades since China and Japan pledged mutual nonaggression, but also the 40th anniversary of ‘reform and opening up,’ the groundbreaking economic policy led by China’s paramount leader Deng Xiaoping that started China’s rapid economic rise and lifted hundreds of millions out of poverty.

In fact, the ‘reform and opening up’ policy was closely related to peace with Japan and the development aid that Tokyo started providing to China in 1979.

Two months before the launch of his new economic policy, which came at the end of 1978, Deng visited Japan to finalize the peace and friendship treaty. He rode one of the famed shinkansen bullet trains and marveled at its comfort and speed. “This is fast!” he remarked. Deng Xiaoping marveled at the comfort and speed of Japan’s bullet trains when he took a ride in 1978.   © Jiji

China had been closed to the outside world following the 1966-1976 Cultural Revolution. For the new era, Deng chose Japan as China’s gateway to the wider Western world. He asked for Japanese loans to help develop China’s still-poor economic infrastructure.

Abe’s visit 40 years later was freighted with meaning for Chinese President Xi Jinping. The ending of development aid from Japan to China, now that the latter’s economy has overtaken the former’s in size, was symbolic of the end of an era, the Deng Xiaoping era. It ought to augur well for Xi, who is trying to usher in a new era of his own.

But the circumstances in which Xi finds himself, especially the tough trade war with the U.S., significantly reduces his leeway to conduct foreign policy. That is probably the reason why his summit with Abe yielded no memorable breakthroughs.

An academic at a university in Beijing said something noteworthy: “Since last year, we Chinese universities were considering holding a big event to mark the 40th anniversary of ‘reform and opening up.’ Permission to hold such an event never came from the authorities.” 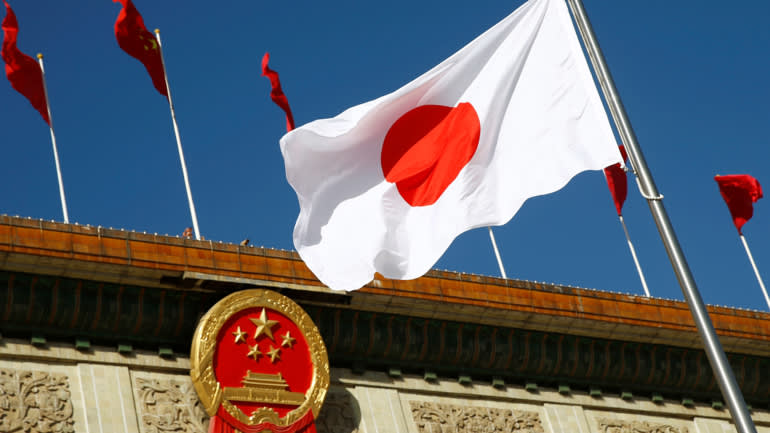 A Japanese flag flies outside the Great Hall of the People in Beijing, welcoming Prime Minister Shinzo Abe — the first Japanese leader to visit in seven years.    © Reuters

The message in China seems to be not to overpraise Deng. Why?

At the Wangfujing Bookstore in central Beijing, just a few minutes’ walk from Tiananmen gate, a display of books suggested a somewhat bizarre attempt to “hide” Deng.

In a special section set up to commemorate the 40th anniversary of the ‘reform and opening up’ policy, the most prominently displayed books are about Xi or Liu Shaoqi, a reformist but tragic leader who was driven to his death during the Cultural Revolution.

Books related to Deng, the unquestioned architect of the policy, are relegated to the lower shelves, as if they were an afterthought.

And if the message was not clear enough, state media recently made an announcement that included an obvious, and perhaps insulting, snub.

The Central Committee of the Communist Party, together with other government-related bodies, released a list of 100 “outstanding” private sector entrepreneurs who have contributed to ‘reform and opening up’.

Wang is said to have close relations with the Deng family. Dalian Wanda Group has come under increased scrutiny from Chinese authorities recently for its high-profile overseas acquisitions.

Xi’s nervousness with anything related to Deng stems from his declaration at last autumn’s Communist Party national congress of the beginning of a “new era” that would be guided by Xi Jinping thought, or more precisely “Xi Jinping Thought on Socialism with Chinese Characteristics for a New Era.”

The two Chinese leaders that followed Deng, and were hand-picked by the paramount leader — Jiang Zemin and Hu Jintao — have already retired. As the first leader of the post-Deng era not to be chosen by Deng himself, Xi wants to shape his own era.

Xi’s plan for overtaking the great Deng Xiaoping was to make China a country on a par with the world’s number one, the U.S.

But that plan has not gone too well in recent months. Singled out by U.S. President Donald Trump for unfair trade practices and hit with punitive tariffs, Beijing is bogged down in a trade war with Washington. It is, in effect, fighting a battle for future hegemony.

All of a sudden, Xi no longer looks invincible. Criticism has surfaced of moves to build a cult of personality around the Chinese leader.

It was in these circumstances that Abe visited Beijing. It was important for Xi to win over Abe and to stabilize China’s relations with Japan, the world’s number three economy, amid tensions with Washington.

But no major breakthroughs were achieved, either in Xi’s meeting with Abe or in a separate encounter between Abe and Premier Li Keqiang. There was nothing to take note of in terms of security. China’s import restrictions on Japanese food products, imposed in the wake of the 2011 Fukushima nuclear disaster, were expected to be lifted, but that has not yet happened.

The conclusion? Xi’s current political momentum at home is not sufficient to allow him to make bold concessions to Japan.

During his talks with Abe, Xi’s eyes were often looking at the table in front of him, as if to read from notes. He chose his words carefully.

Forty years after the ‘reform and opening up’ policy was introduced, Sino-Japanese relations are now at a key juncture. But Abe’s official visit to China reflected how Xi is now beset with troubles at home and abroad.

On the question of Xi’s domestic political troubles, there is one more reason why the current Chinese leader may be shunning his illustrious predecessor Deng, instead of celebrating a key anniversary of his achievements.

It is an incident that took place about 30 years ago.

In 1987, Hu Yaobang, then general secretary of the Chinese Communist Party, was dismissed. Hu was a champion of ‘reform and opening up’ and was popular with the public. Hu had been given important posts by Deng.

Hu was held accountable for allegedly lax handling of nationwide student protests calling for democratization, which eventually led to the Tiananmen Square demonstrations, which were violently suppressed.

Deng decided to dismiss Hu. At the time, Xi Zhongxun, President Xi’s father, put himself in harm’s way to resist Hu’s dismissal. The elder Xi was serving as a Politburo member. 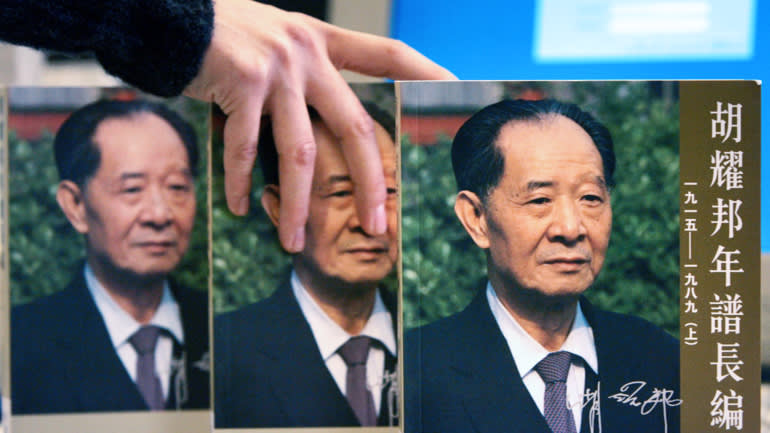 A three-volume book of the life of China’s reformist Communist Party chief Hu Yaobang, whose death in 1989 sparked the Tiananmen pro-democracy protests.   © Reuters

Xi Zhongxun even indirectly told Deng: “If you insist on dismissing Hu Yaobang, let me step into his shoes as the Communist Party’s general secretary.” The elder Xi demanded something impossible from the paramount leader.

Xi Zhongxun’s vehement resistance significantly delayed the convening of an enlarged Politburo meeting to formally dismiss Hu. On Jan. 16, 1987, Hu was removed from his post.

As a result, Xi Zhongxun was effectively purged by Deng later. The elder Xi’s health deteriorated and he died in 2002 after enduring dark days. As the elder Xi’s fate shows, power struggles in China are always grim affairs.

When Hu was dismissed, Xi Jinping was in his thirties, serving as a senior local official. The chain of events that took place at the time remains etched into his memory.

The stark contrast in China’s attitude today toward Japan, compared to the tense atmosphere that surrounded their relations just six years ago, shows just how much can change in a relatively short time.

In September 2012, tens of thousands of protesters marched in Chinese cities throwing bottles and eggs at Japanese diplomatic facilities to express their anger at Tokyo’s nationalization of the Senkaku Islands in the East China Sea, a group of small uninhabited islets called the Diaoyu in China.

But Xi’s mixed feelings toward Deng also show that in the world of Chinese politics, grudges are not forgotten, however many decades may pass.

South Korea’s coronavirus cases climb above 7,000, most cases traced to...

These 4 Countries Will Stop China From Ruling A Disputed Sea

China and India accuse each other of opening fire in fresh...

Strapped for cash, Pakistan looks to China and the Middle East...