Growing up in Singapore, Chan Kian Kuan always took pride in his Teochew heritage — the dialect, the cultural traditions and the famous steamed fish. But after visiting his ancestral village in Teochew, in Guangdong Province, China, and seeing the progress there, he became truly proud to be not just Teochew, but also Chinese.

“It’s very messy. We are Chinese, but we are Singaporean, too,” said Mr. Chan, vice president of the Teochew Poit Ip Clan Association in Singapore. “When China becomes stronger, we feel proud. China is like the big brother.”

As a young country made up mostly of immigrants, Singapore has for decades walked a fine line between encouraging citizens like Mr. Chan to connect with their cultural heritage and promoting a Singaporean national identity.

But there are growing concerns here that a rising China could tip that carefully orchestrated balance by seeking to convert existing cultural affinities among Singaporean Chinese into loyalty to the Chinese “motherland.”

Confident in its fast-growing political and economic clout, China has become increasingly assertive in its efforts to appeal to the vast Chinese diaspora to serve the country’s national interests and gain influence abroad. Already, there has been evidence of the Chinese Communist Party’s attempts to manipulate political activity among Chinese populations in countries like Canada, the United States and Australia. 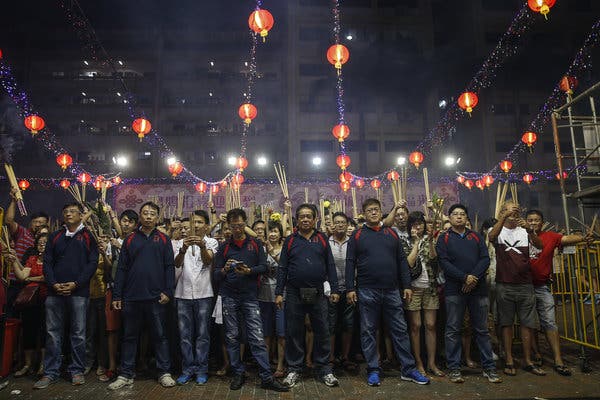 And with ethnic Chinese constituting nearly 75 percent of Singapore’s population of 5.6 million, some scholars and former diplomats worry that this island nation could be an especially tantalizing target for the Chinese government’s influence efforts.

“For us, it is an existential issue; the stakes are extremely high,” said Bilahari Kausikan, a former permanent secretary of Singapore’s Ministry of Foreign Affairs and one of the most outspoken voices in the country on the subject of Chinese interference.

“China’s rise is a geopolitical fact that everyone must accept,” Mr. Kausikan said. “But it’s a very small step in my mind from cultural affinity for China to the idea of Chinese superiority. We are only 53 years old. It’s not guaranteed that every Singaporean Chinese would not be tempted either consciously or unconsciously to take that step.”

Last month China’s ambassador to Singapore took the rare step of publicly rebutting recent remarks made by Mr. Kausikan in which he raised an alarm about what he called China’s covert “influence operations.”

“We uphold the principles of peaceful coexistence and champion global fairness and justice,” the ambassador, Hong Xiaoyong, wrote in an op-edin The Straits Times, an English-language newspaper. “We oppose the big bullying the small and interference in others’ internal affairs. This is what China has said, and this is also what China has been doing.”

“China respects Singapore’s achievements in maintaining racial and religious harmony,” he added. “It has no intention of influencing Singaporeans’ sense of their national identity and will never do so.”

One example of how on-edge Singaporean officials have been came to light last year when the government expelled Huang Jing, an American academic born in China, for what it said was his covert effort to influence Singapore’s foreign policy on behalf of an unnamed foreign government — widely believed to be China. The expulsion came amid heightened tensions between Singapore and China over territorial issues relating to the South China Sea.

Mr. Kausikan and others are also concerned about China’s subtler influence efforts in Singapore, including appeals to sentimental “flesh and blood” ties to China.

In recent years, China has stepped up people-to-people exchanges between the two countries, helping to organize conferences bringing together overseas Chinese, arranging visits for Singaporean Chinese to their ancestral villages and coordinating study abroad programs and “roots-seeking camps” for young Singaporeans.

These kinds of programs are not unique to China, of course. The camps, for example, bear some similarity to Israel’s popular Birthright program. They are often arranged and paid for in part by Chinese government agencies like the Overseas Chinese Affairs Office.

In a description of one such camp held this year, participating Singaporean students were promised a full itinerary of activities including lessons in Chinese calligraphy and history. At another camp, in 2014, the schedule included learning the martial art of tai chi and singing Communist “red” songs.

In recent years, officials affiliated with the Communist Party’s United Front Work Department — a powerful Chinese agency responsible for winning hearts and minds abroad — have also visited Singapore with the aim of strengthening ties with the local Chinese.

“My cellphone is on 24 hours a day,” Hong Guoping, then head of the United Front in the Xiang’an district in Fujian Province, told a group of Singaporean Chinese affiliated with that district in 2013. “My fellow countrymen can call me at any time. I’m happy to serve everyone.”

In a sign of the growing emphasis on building diaspora ties, it was announced this year that the Overseas Chinese Affairs Office would come under the purview of the United Front Work Department.

“A more generous reading is that these are people-to-people exchanges,” said Ian Chong, an associate professor of political science at the National University of Singapore, “and a more skeptical reading is that it’s an effort by China to exert soft-power influence.”

Some scholars have highlighted what they call a worrying trend that has seen China increasingly blurring the distinction between huaqiao (Chinese citizens overseas) and huaren (ethnic Chinese of all nationalities).

At an overseas Chinese work conference last year, President Xi Jinping stressed the need to bring together people of Chinese descent around the world — up to 60 million ethnic Chinese in more than 180 countries — to enjoy the “Chinese dream.”

“The realization of the great rejuvenation of the Chinese nation requires the joint efforts of Chinese sons and daughters at home and abroad,” said Mr. Xi, according to Xinhua, China’s state-run news agency.

“There is a sense that the emphasis now is on how all ethnic Chinese share a similar origin and therefore should be more sympathetic to a P.R.C. perspective,” said Professor Chong, referring to the People’s Republic of China.

In some Western countries, China has already successfully mobilized local groups like Chinese businessmen, Chinese students and Chinese-language media, using them as proxies to rally against anti-Chinese views or to whip up support for Beijing’s line on contentious issues like the Dalai Lama or Taiwan.

Frequently, the result has been a negative and often xenophobic anti-Chinese backlash. Many overseas Chinese have said they are now being unfairly subject to a cloud of suspicion simply for being associated with China.

“When you start reaching out to people on the basis of race and blood, it becomes unacceptable to other governments,” said Wang Gungwu, a former chairman of the East Asian Institute at the National University of Singapore. “On the other hand, Beijing thinks it is natural to do so. And that is where the conflict lies, however unintended the consequences may be.”

As the only country outside China, Hong Kong and Taiwan to have a majority-Chinese population, Singapore is in a unique position.

Wary of being seen as a fifth column of China, the country under Prime Minister Lee Kuan Yew went out of its way after gaining independence in 1965 to assert its sovereignty — making it a point to be the last country in the Association of Southeast Asian Nations to establish diplomatic ties with China.

At the same time, the government sought to build a Singaporean national identity based on multiracialism, equality and meritocracy. English is the country’s official working language.

But Singapore finds itself continually needing to remind officials in Beijing that it is not a Chinese country. Last year, for example, not long after China unveiled a gleaming new center to promote Chinese culture here, Singapore countered by opening a sprawling $110 million, 11-story Singapore Chinese Cultural Center in the heart of the financial district.

And China’s efforts to gain influence in Singapore are by no means one way. Recognizing the economic potential after China’s opening up in the 1980s, Singapore has also gone out of its way to play up its shared Chinese heritage.

In the late 1970s, for example, the government started a language campaign to encourage young Singaporean Chinese to learn Mandarin — China’s official language — instead of their native Chinese dialects, with an eye to facilitating greater business opportunities. Every year, the country also hosts numerous performances by Chinese entertainers, particularly during the annual Chinese New Year celebrations.

Last year, Singapore was China’s top foreign investor — a status many here proudly attribute to the country’s ability to act as a gateway between China and the West.

“You could say Singaporeans are even more proactive than the Chinese” in building ties between the two countries, said Mr. Chan of the Teochow Poit Ip Clan Association.

Not everyone is convinced that China will succeed in winning the loyalty of Singaporean Chinese, which are a large and fragmented population.

Young Singaporean Chinese as well as those who studied in the country’s former English education system, for example, often have only a vague notion of China and limited Chinese-speaking abilities. Then there is the large influx of immigrants from China in recent years, which has sharpened the perceived differences between the two countries.

Then again, when it comes to strengthening its influence abroad, China has proved that it is both patient and persistent.

“They are not eager to have immediate results,” said Leo Suryadinata, a visiting senior fellow at the ISEAS-Yusof Ishak Institute in Singapore, “because Beijing’s view is always the long-term view.”

Taiwan has valuable coronavirus lessons, but the World Health Organization continues to shun it

How China changed Hong Kong: views from the city

Japan to quarantine all visitors from China and South Korea

China’s plans to rule the seas hit trouble in Pakistan

China is Investing $57 Billion Into Pakistan

Nepal to get internet connection from China