HAA, Bhutan — India’s main garrison in the Kingdom of Bhutan sits only 13 miles from a disputed border with China. There is a training academy, a military hospital, a golf course — all testament to India’s enduring role defending this tiny Himalayan nation.

Earlier this summer, China began extending an unpaved road in the disputed territory, and India sent troops and equipment to block the work. The incursion has resulted in a tense standoff that has lasted more than 50 days, with Indian soldiers facing Chinese troops who have dug in just a few hundred yards away.

At a time when North Korea and the United States are trading threats of war, China and India — the world’s two most populous nations — have engaged in increasingly bellicose exchanges over this remote border dispute, evoking memories of their bloody conflict in 1962 as the world’s attention was focused on the Cuban missile crisis.

There are fears that ambition and nationalism could lead them to war again, but now with more firepower at their disposal.

Caught between these two nuclear rivals seeking regional dominance is Bhutan, a mountain nation of 800,000 with a mystical reputation and a former king who popularized the concept of “gross national happiness” as a measure of a country’s well-being. 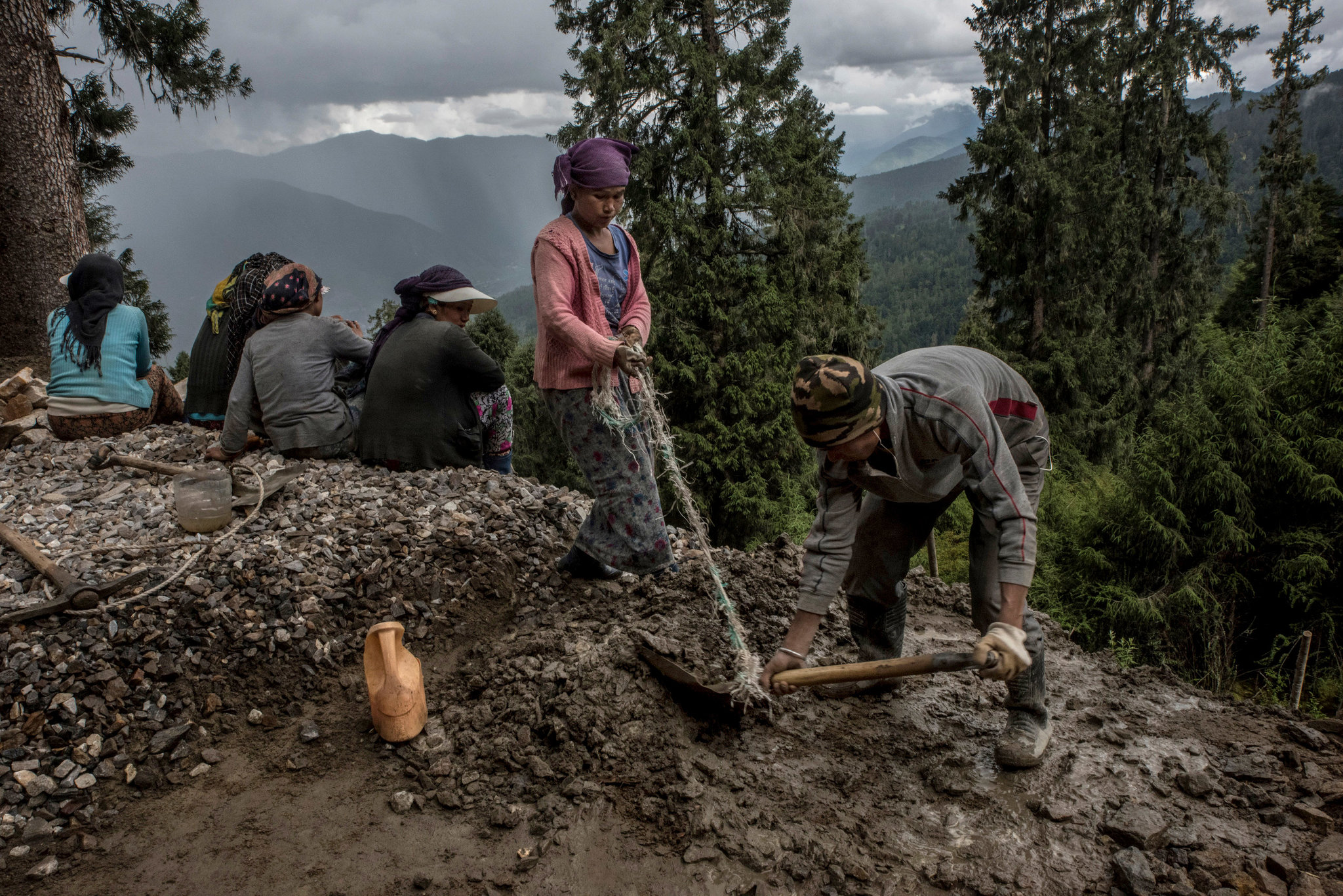 Indian workers hired by the nation’s army to improve the Bhutanese road network.CreditGilles Sabrie for The New York Times

India says it is acting on Bhutan’s behalf in the standoff. But its intervention has not resulted in much gratitude here. On the contrary, many in Bhutan feel that India’s protective embrace has become suffocating.

“In the case of war between India and China, we would be the meat in the sandwich,” said Pema Gyamtsho, a leader of the opposition party in Bhutan’s National Assembly. “It shouldn’t have to be a choice,” he added, referring to his nation’s ties with India and China, “but it is at the moment.”

For decades, Bhutan has chosen India. More than a half century ago, Bhutan watched warily as China’s Communists took power and eventually occupied neighboring Tibet, with which it has close ethnic, cultural and religious ties. India offered to defend the kingdom, and Bhutan accepted.

But the latest standoff has inflamed festering resentments over India’s influence in the country. In particular, many suspect that India has sought to block Bhutan’s efforts to establish diplomatic relations and expand trade with Beijing, fearing that a rapprochement could remove the strategic buffer that Bhutan provides.

“Bhutan has every right to its sovereignty; that’s the crux of the thing,” said Wangcha Sangey, a former publisher and head of the Chamber of Commerce and Industry, who has been one of the most outspoken critics of India’s interference. “We have the right to live the way we want to live and to have the foreign relations we want to have.” 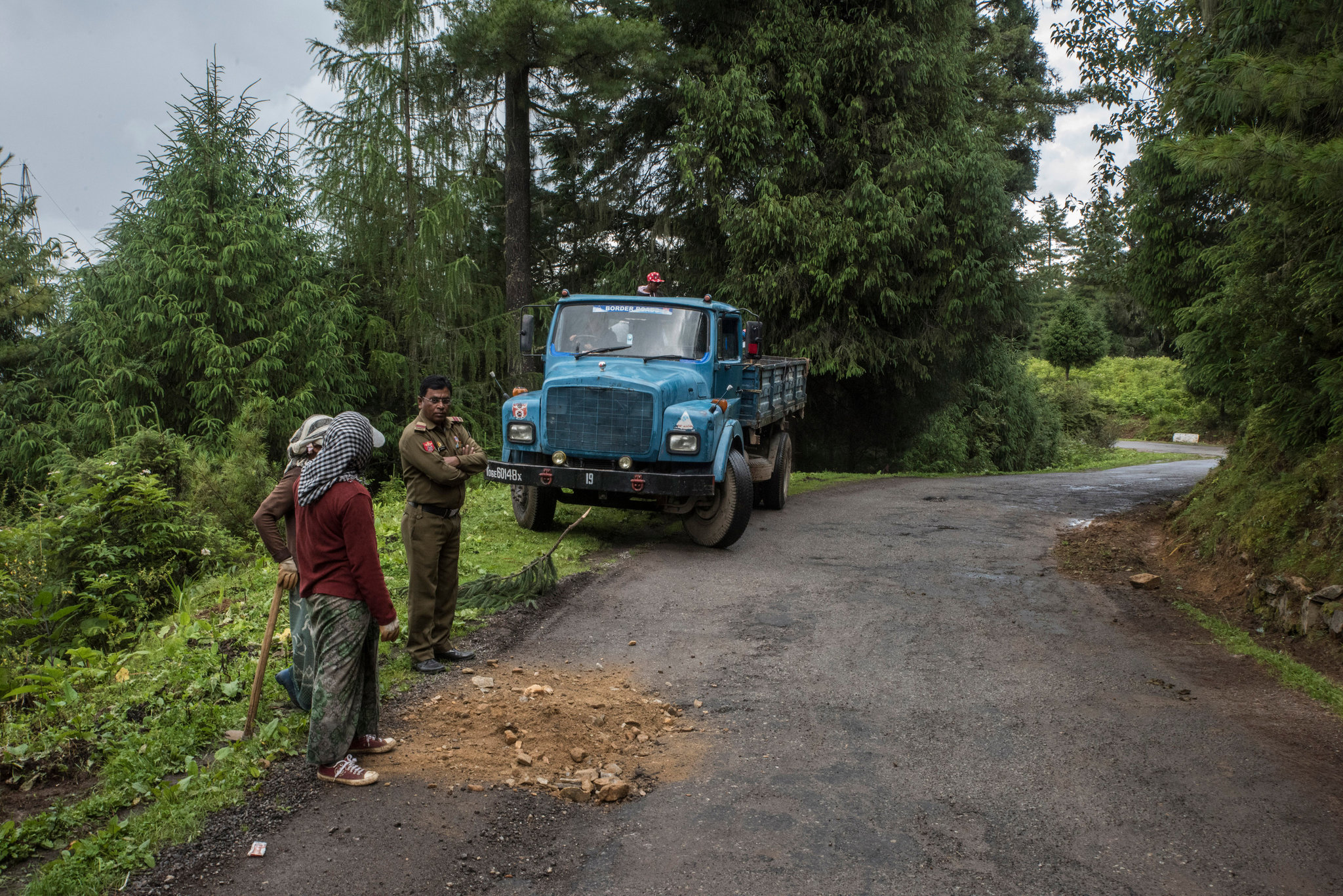 An Indian Army officer looking on as Indian workers repaired a road in the Bhutanese border region.CreditGilles Sabrie for The New York Times

On the surface, the dispute turns on 34 square miles of land claimed by both Bhutan and China. India has accused China of extending the road to expand its control of the territory, with some comparing the move to Beijing’s efforts to cement its claims in the South China Sea by transforming reefs into islands.

The disputed area is strategically significant because it slopes into a narrow Indian valley that connects central India to its landlocked northeastern states. India calls it the Chicken’s Neck and has long feared that China could seize it in a war, splitting its territory.

But when India ordered its troops across the border on June 16, it seemed to do so without a request from Bhutan. While Bhutan has condemned the Chinese road work, it has studiously avoided saying whether it asked India to intervene. The Indian government has also avoided the question.

China has been talking tough, with near-daily warnings against India. Commodore Liu Tang, a deputy commander of the South China Sea Fleet, warned last week in The People’s Liberation Army Daily that China’s restraint thus far was “not without a bottom line.” The headline declared, “China’s territory is large, but not an inch of land is redundant.”

India has put more troops on alert in recent days, suggesting that it, too, is not prepared to back down. 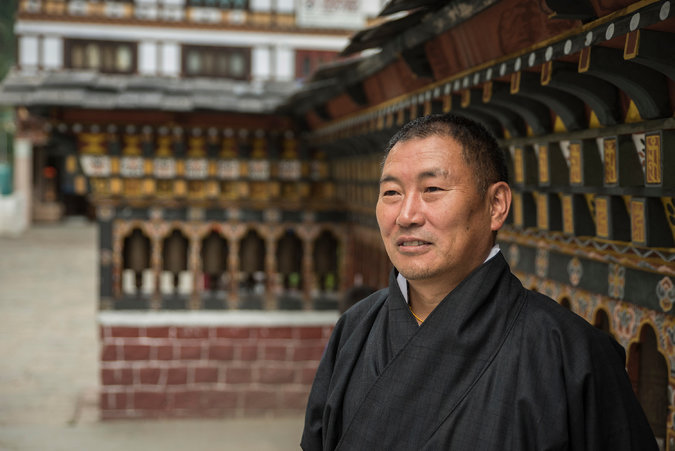 Pema Gyamtsho, a Bhutanese opposition leader, said of his country’s ties to China and India, “It shouldn’t have to be a choice.” CreditGilles Sabrie for The New York Times

In Haa, a small village an arduous day’s hike from where the troops are squaring off, the dispute is like distant thunder, a warning of storms that may come but are not yet anything to worry about.

The standoff does not, so far, involve Bhutanese forces, and state television and even the independent news media have followed the government’s lead and said virtually nothing about the conflict.

One resident of Haa said that a relative had happened on Chinese soldiers digging trenches while he herded his yak along the border. But the authorities have since closed the foot trails to the disputed area.

That has shut down an informal shuttle trade with Tibetan towns on the Chinese side of the border. For years traders have traveled back and forth on foot or horseback, selling cordyceps — known as Himalayan Viagra — and other medicinal herbs from Bhutan. They return with electronic goods, carpets, silks and clothing.

In a country where per capita economic output — not the happiness index — reached a high of $2,751 last year, the trade has become a livelihood along the border. 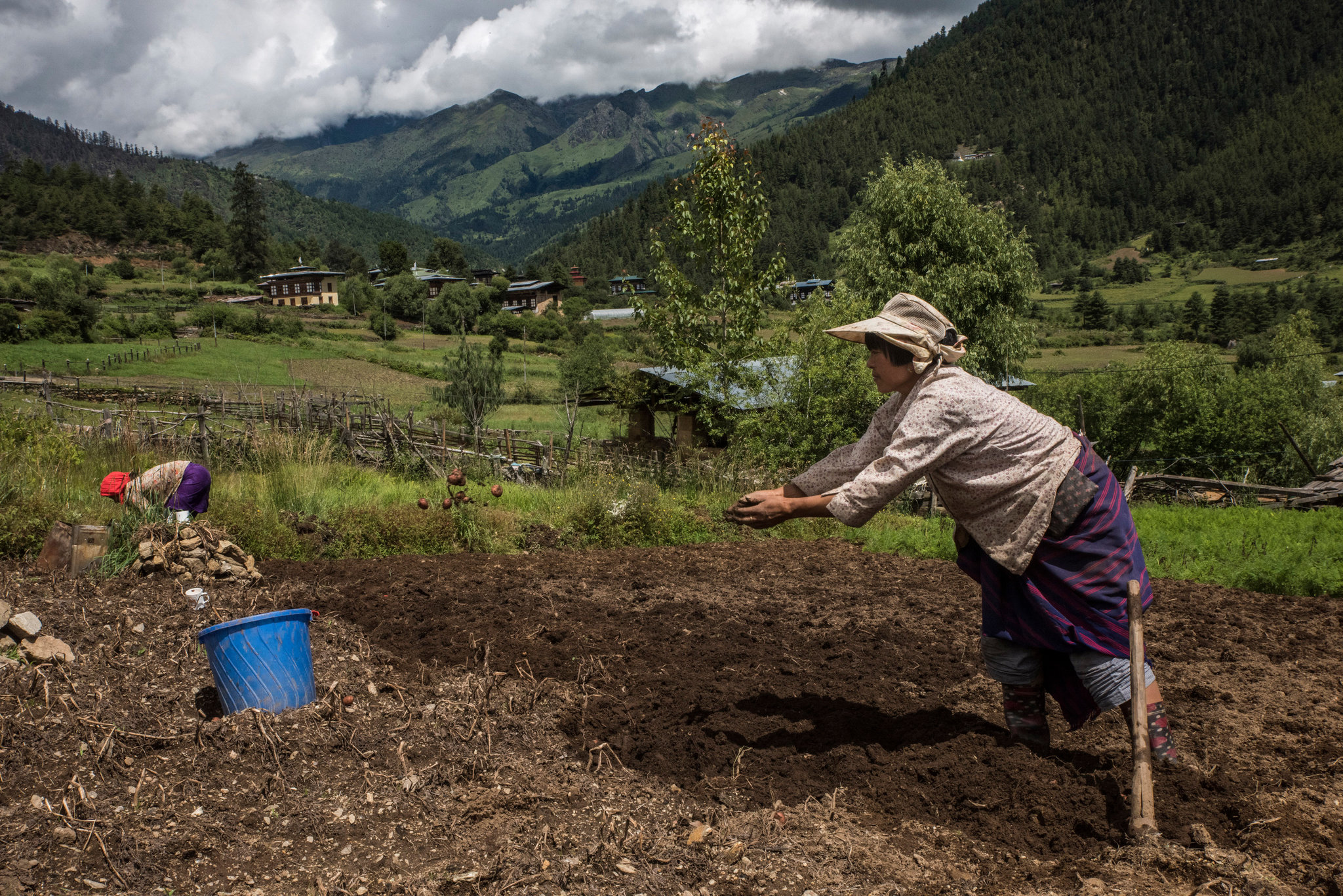 Nima Dorji, a shopkeeper in Haa, said he had not received any shipments since the border routes were closed, and worried that he might have to look elsewhere to restock. “We do not talk much about it,” he said. “It is very sensitive.”

Bhutanese officials have maintained a pointed silence, preferring ambiguity to the risk of offending either India or China. The Foreign Ministry did not respond to requests for comment; nor did the prime minister, Tshering Tobgay. The foreign minister, Damcho Dorji, said on Friday that he hoped the situation would be resolved “peacefully and amicably.”

Many interviewed in Bhutan expressed more concern about India’s actions than China’s. Some note that one effect of India’s move — intended or not — has been to undermine border negotiations with China that could have cleared the way for closer economic ties.

There are four border areas in dispute: two in the north and two in the west, including the place where the standoff has unfolded. In 1998, China proposed ceding the northern areas to Bhutan in exchange for the western ones. And while Bhutan agreed in principle, a final agreement has not been reached.

After the latest round of talks in Beijing last year, the two sides seemed to be nearing a consensus, though prospects for a new round now seem uncertain. 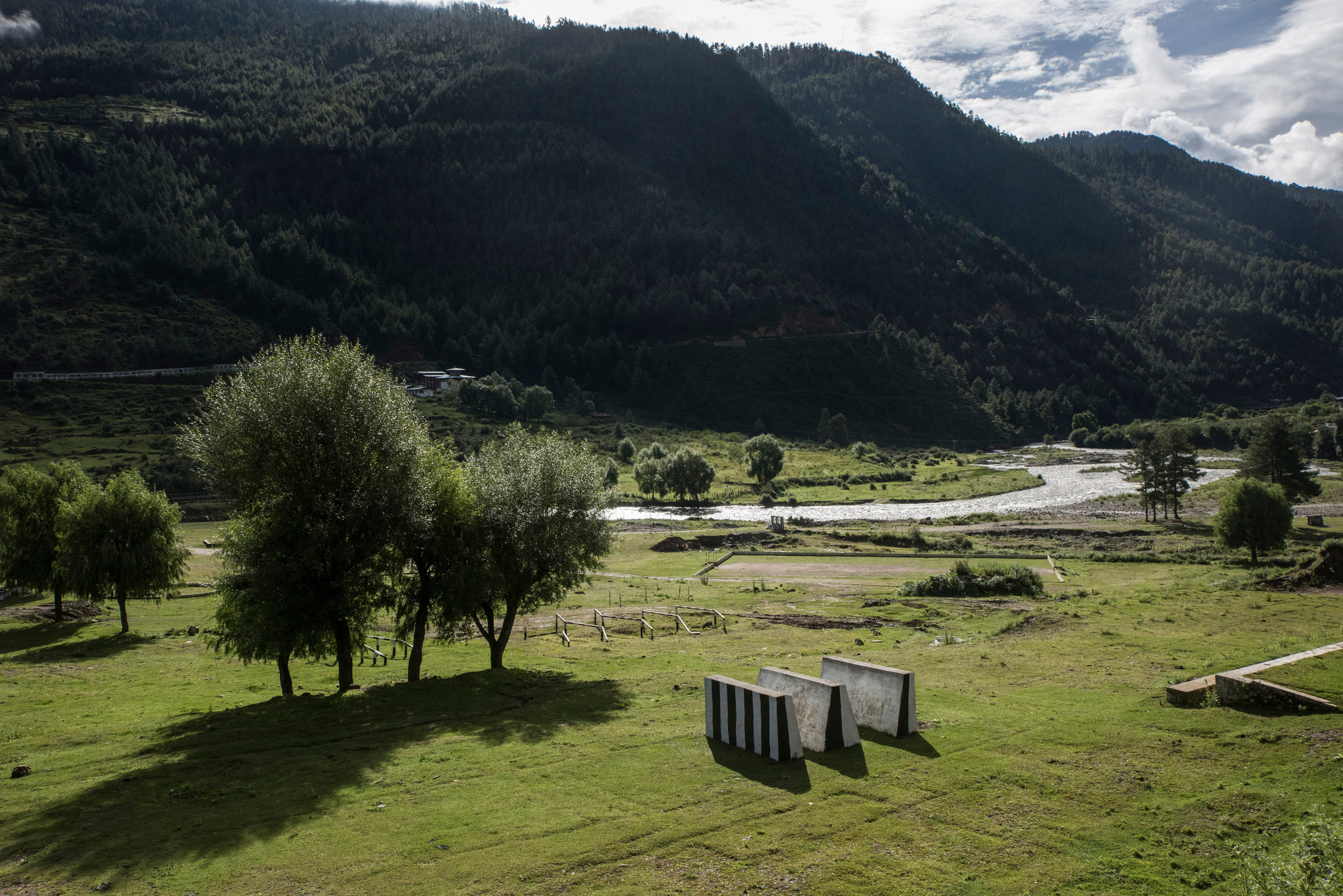 A training ground for a Bhutanese military school in Haa, an arduous day’s hike from where Indian and Chinese troops are squaring off. CreditGilles Sabrie for The New York Times

Since signing a friendship treaty with India in 1949, Bhutan has relied almost exclusively on India for its defense. To this day India trains and pays the salaries of the Royal Bhutan Army, while its engineering corps builds and maintains Bhutan’s hairpin mountain roads. The exact number is not public, but India usually keeps 300 to 400 troops in Bhutan.

The relationship has evolved along with the country itself, and as fears that Bhutan could be subsumed by China have faded.

In 2006, Bhutan’s revered fourth king, Jigme Singye Wangchuck, abdicated after overseeing a democratic transition that culminated in elections for a national assembly in 2008 and 2013. The advent of parliamentary politics has generated increased debate about further opening a country that did not allow television until 1999.

And after decades of tilting almost exclusively south, Bhutan has begun looking north to China.

In 2012, the prime minister at the time met with his Chinese counterpart at a Group of 20 summit meeting in Rio de Janeiro. Not long afterward, India cut subsidies to Bhutan for cooking oil and kerosene. The move was widely seen as retaliation, and the ruling party in Bhutan lost the next election.

Part of the lure of better relations with China is money. In addition to the shuttle trade, there is tourism, one of Bhutan’s biggest industries. Indians do not need visas to travel to Bhutan, but Chinese must pay $250 a day in advance for vacation packages. Still, for the first time last year, more visitors came from China than from any other country besides India.

Pema Tashi, who manages Happiness Kingdom Travel and advertises “a sojourn in paradise,” caters to Chinese clients with eight guides who speak Mandarin. He complained that there were no direct flights between Bhutan and China, and expressed suspicion that India had worked to prevent a normalization of relations that would open up such routes.

“We try to protect the interest of our big brother,” he said, referring to India, “but they feel that if we get closer to the north, we might not be as dependent on them.”

Taiwan has valuable coronavirus lessons, but the World Health Organization continues to shun it

Is the Japanese PM’s first overseas trip to Vietnam and Indonesia...

How China Got Sri Lanka to Cough Up a Port