The mountains of Bhutan hold many secrets. You only have to climb its steep paths and cross its picturesque valleys to discover them.

Thirty minutes into the flight, the captain announces our landing in Bhutan. I turn to my friend and tell her, “No matter what, please let’s be cool and not take photos near the aircraft after we land.” We look out of the window. The plane navigates through a valley of mountains, a green carpet from above. Flying like a bird, swooping down and tilting sideways, the moment is no less dramatic than an action-packed scene from Indiana Jones.

After landing, some passengers take photos of the view, the airport and the plane. And we? Well, we did the same.

Bhutan is picturesque — its rich flora and flauna and mountains follow you at every curve and bend of the road. Its people are friendly and polite. This Himalayan kingdom is for tourists who revel in Nature, who like to keep aside their earphones and enjoy the constant gurgling of the river. 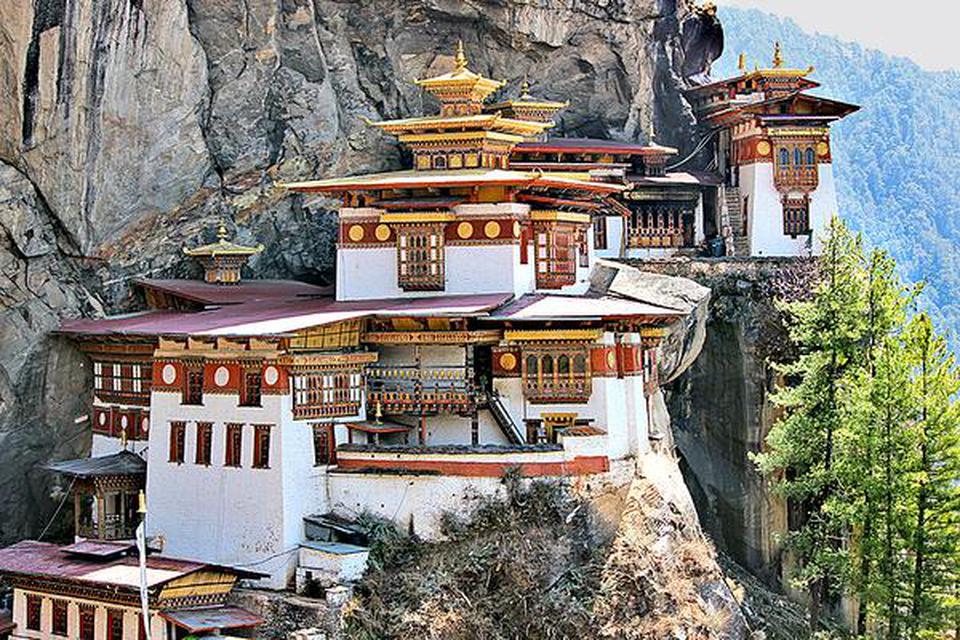 Ours was an all-women trip, mostly because our men clearly wrote off Bhutan from their bucket list. Deciding on the schedule and itinerary, we included every suggestion that came our way. Even if that meant scaling mountains and relieving ourselves amongst ‘friendly bushes’ as suggested by the guide (the best way to see Bhutan is by hiring a registered guide). Not wanting to lose an opportunity to put our adventurous spirit to best use, we agree to trek. We first decide to visit the Fertility Temple, then Khamsum Yuley at Punakha, and finally, the Tiger’s Nest in Paro.

The temple is situated on a mountain, a short distance from Punakha city. The trek is easy and mostly requires crossing vast fields of millets. The terrain is half-inclined. Walking through the fields, sighting birds and insects, is fun. The climb to the temple is gradual. As you near it, it gets breezier and the view gets better. According to local belief, a visit to the Fertility Temple blesses a childless couple with a child. The monks at the temple display photographic evidence of those who visited the temple and had their wish fulfilled.

This place was not part of the original plan. One night, after dinner at the Taj Tashi, a friend suggested we take this trek only to enjoy a view of the entire valley. It got us thinking about selfies, pano shots and FB covers. So, we assimilate this place too in our itinerary. On the way, we stop at a pine forest for some filmy shots. Our guide, Tika Prithi Subba, readily agrees to take us there. The climb is daunting. From the foothills, we spot a temple hidden in the jungle. As the climb gets steeper, we remind ourselves of what lies ahead — a never-seen-before view. ‘How much more?’, we ask every monk and trekker we meet on the way. Once there, we sit under a tree to soak in the freshness. The sun is shining, but there is moisture in the air. The valley looks like a child’s painting. A river flows between the mountains. We realise, capturing the beauty of this place isn’t possible with any lens whatsoever.

Of all the treks, the trek to the Tiger’s Nest in Paro turns out to be the most challenging. Taktsang Palphug Monastery, also known as the Paro Taktsang, is a Buddhist temple complex which clings to a cliff, 10,240 feet above sea level. The only way to reach the temple is by trekking. The path, which begins with a small incline, gradually leads trekkers to a pine forest. The roots of these trees are spread out like a network and offer the only grip on the smooth mud terrain. Without a pair of good trekking shoes, this trek is not recommended. The climb might not be a pleasurable one for those with acrophobia. The sights and sounds are, however, to die for. The Mexican moss-laden trees paint an unforgettable picture. After a three-hour climb, when we reach the view point, the temple seems to be at an arm’s distance. However, we are yet to cover the most trying part. The cliff from the Tiger’s Nest is a deep gorge with precarious steps. After this, a waterfall and a roof of colourful prayer flags go from one hill to another. The temperature drops and we reach out for our jackets and caps. We finally make it to the monastery. However, the thought of climbing up the steep rickety steps to reach the path back to our car dampens our spirits. Our guide pulls out chocolate bars and toffees from his bag. We replenish ourselves and begin our walk back.

With a tinge of sadness, we wonder whether we would ever dare to do this trek again. See the waterfalls again? Or the 39 varieties of rhododendrons that bloom in Bhutan.

By Prabalika M. Borah
The Hindu