Sri Lankan Prime Minister Ranil Wickremesinghe’s recent visit to India signified a new high in India–Sri Lanka relations. This was his third visit since his government came to power in 2015 and it laid the foundation for long-term collaboration in the areas of energy, infrastructure and special economic zones. After 2500 years of strong cultural, linguistic and religious ties between the two countries, the partnership is entering a new era that has to contend with China’s presence in Sri Lanka. 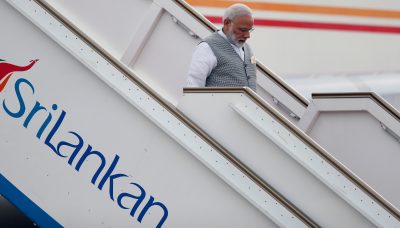 In comparison, bilateral trade between China and Sri Lanka stood at US$4 billion in the same time frame, but with a higher rate of growth. A Sri Lanka–China FTA is also on the anvil. While India is one of the top four investors in Sri Lanka, with cumulative investments of over US$1 billion since 2003, China is the largest investor by far with nearly US$15 billion in funding and investment in 2016 alone. Most of the government and private investment by China is in major infrastructure projects — especially ports and airports. China’s interest in Sri Lanka is largely attributable to its strategic location on the route of China’s Belt and Road Initiative.

Given the growing dominance of China in South Asia and China’s close connections with Sri Lanka, in recent years the relationship between India and Sri Lanka has centred around economic cooperation and security concerns with less emphasis on political matters. For example, protecting the Tamil populations from the excesses of the army after the collapse of the Liberation Tigers of Tamil Eelam (LTTE) was an important concern for the south Indian state of Tamil Nadu. But important political issues have been overshadowed by the ‘China factor’ — the major reason for stress between the two countries.

China has pumped millions of dollars into Sri Lanka’s infrastructure since the end of its 26-year long civil war in 2009. China’s ‘string of pearls’ strategy is an attempt to expand its influence in South Asia, which is closely watched and monitored by India. China’s flagship projects in Sri Lanka are the Hambantota Port Development and the Colombo Port Project, both located at strategic points in global sea trade. Large projects like these make it easier for Beijing to draw Sri Lanka into its 21st Century Maritime Silk Road project — part of the Belt and Road Initiative.

In the last couple of years India has focused on countering the growing presence of China in Sri Lanka by developing infrastructure. According to the government of India, Sri Lanka has been one of the major beneficiaries of India’s development credit, to the tune of US$2.6 billion including US$436 million in grants.

The Indian government has also extended a line of credit of US$167.4 million through the Export-Import Bank of India for the repair and upgrade of the Colombo Matara rail link, which was damaged in the 2004 Boxing Day Tsunami. India has also been supporting a large number of small development projects in education and health through its grant funding.

There are also talks of upgrading the India–Sri Lanka FTA to include a new trade pact called the Economic and Technological Cooperation Agreement (ETCA), which is expected to be signed by the end of 2017. The ETCA is proposed to enhance trade in services, investments and technology cooperation with India’s five fastest growing southern states — Karnataka, Tamil Nadu, Kerala, Andhra Pradesh and Telangana. Given these states’ proximity with Sri Lanka, the ECTA would leverage Sri Lanka’s unique geo-strategic location, which is at the crossroads of major shipping routes. The ECTA would also increase regional integration and could make Sri Lanka the geo-economic centre of South Asia.

So far, the Sri Lankan government has been able to strike a balance in its relations with both India and China. Sri Lanka’s financial engagement with China is deep and covers a vast gamut of activities — it depends on China for its developmental needs. Yet given the high level of regular interactions and ministerial-level meetings between Sri Lanka and India, their relations have stabilised too and are at an all-time high.

Despite Chinese dominance in Sri Lanka, India has managed to make its own mark, realising that Sri Lanka needs to be treated as an equal partner. The renewed trust factor and the recent visit of Prime Minister Wickremesinghe has laid the foundation for a new era of friendship and cooperation between India and Sri Lanka.

Geethanjali Nataraj is Professor of Applied Economics and Economic Policy at the Indian Institute of Public Administration (IIPA), New Delhi.

Why is the India-China border stand-off escalating?

The United States Should Help Mongolia Stand Up to China