President Trump began his trade war with China out of concern that Beijing was using unfair economic practices to prevent the United States from dominating next-generation technologies like autonomous vehicles, advanced telecommunications and artificial intelligence.

But as the two countries move closer to a trade deal, it seems increasingly unlikely that China will give ground in a crucial area that could determine which country wins the technology race. Despite months of pressure from the White House, Chinese negotiators have so far refused to relax tight regulations that block multinational companies from moving data they gather on their Chinese customers’ purchases, habits and whereabouts out of the country. Such data is crucial as industries build next-generation technologies.

With another round of trade talks underway this week, the United States and China appear headed toward an agreement that could end the monthslong trade war and lift tariffs on hundreds of billions of dollars of products. China is offering to strengthen its laws surrounding intellectual property, direct large purchases of American goods and reduce barriers for foreign companies in industries like finance and agriculture. It has also proposed giving foreign cloud computing companies like Amazon, Microsoft and Apple greater ability to operate independently in China, people familiar with the negotiations say.

A trade deal between the two nations will calm tensions and be seen as a victory for Mr. Trump, but some American technology companies fear the administration is giving up a valuable opportunity to press China on data-related issues and will cede too much economic power to Beijing.

China has already overseen a splintering of the world’s internet, a move that has helped Chinese companies catch up to American firms. Over the past two decades, China built and shored up the Great Firewall, which blocks websites including YouTube, Facebook, Google and The New York Times from reaching more than 700 million Chinese internet users. Behind those barriers, Chinese internet companies like Alibaba, Baidu and Tencent have thrived, developing cutting-edge services that have in many respects surpassed those of their Western competitors.

The American tech industry is concerned that this same fracturing is being repeated with data, setting up more permanent divisions in how technology will be used around the world. As companies collect and analyze ever more data on customers, China has insisted that information be stored within its borders, on Chinese-made servers and routers, and not be transferred out of the country.

Business executives say relaxing China’s restrictions on data is critical to ability of the United States to build globally competitive firms in areas like autonomous vehicles and artificial intelligence, which are expected to power jobs and economic growth. 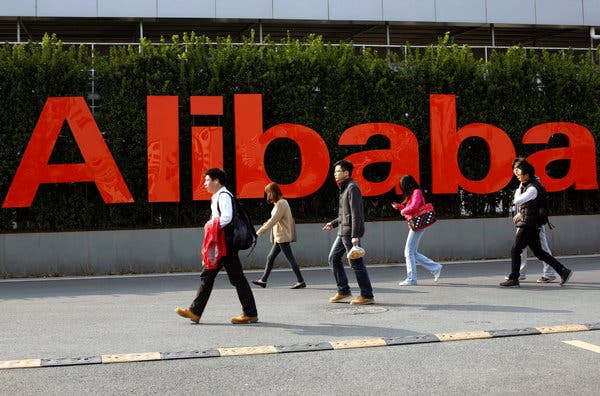 China describes its data restrictions as an issue of national security, but technology firms, financial advisers, energy companies and others argue that the rules are intended to help Beijing dominate data-intensive industries. American firms say the restrictions increase their costs, force them to share sensitive technology with Chinese partners, make them more susceptible to cybertheft and leave them beholden to Chinese monitoring and censorship.

Trade in data is just one of several technology issues the United States is discussing with China. Trump officials are also trying to end Beijing’s pattern of forcing American companies that operate in the country to transfer valuable technology to Chinese partners, and curb cybertheft. It remains unclear how these issues will be resolved, but a final deal is expected to include changes that allow American companies in the financial and automotive industries to operate independently, rather than with a Chinese partner.

“There’s no question to me that the Chinese are setting up a separate technology system, and they are a superpower in the field,” said Ian Bremmer, the president of Eurasia Group, a consulting group. “There are some areas where they are more advanced than we are.”

The enormous volume of email, software, audio and video content that crosses international borders each day facilitates trade in goods and services in a range of industries, including entertainment, finance, law, manufacturing and retail.

It is also allowing companies to amass troves of information on customer behavior, through monitoring purchases on Amazon, Netflix binges, GPS routing, fitness tracking and other digital services. That data, in turn, gives companies information about users’ shopping habits, viewing history, driving patterns and health that is feeding the development of industries like cloud computing, artificial intelligence, machine learning and autonomous vehicles.

Companies are also gathering data about their own operations from sensors that monitor production lines in factories and alert retailers when certain products are out of stock.

This data is helping companies make and sell products in ways that are far more important to the American economy than is typically recognized, said Christine McDaniel, a senior research fellow at the Mercatus Center. A 2016 study by the McKinsey Global Institute found that digital flows now exert a larger impact on economic growth than trade in goods.

Despite its economic importance, there are few global rules governing trade in data. Trade in goods is governed by the World Trade Organization and an extensive network of bilateral and multilateral trade deals, but no similar regulatory structure exists for data flows.

That is beginning to change. The United States has enshrined the tech industry’s position in the United States-Mexico-Canada agreement, which provides for open access to government data, protections for company source codes and algorithms and a prohibition on customs duties on data, among other provisions.

The agreement will serve as a jumping-off point for American trade talks with Japan, as well as negotiations on e-commerce rules with more than 70 countries at the W.T.O. Trade agreements between Europe and Japan, and between Japan and a collection of 10 other countries in the Asia-Pacific region, also have as a default the free flow of information, with some exceptions.

In other parts of the world, the tide is moving in the opposite direction, said Aaron Cooper, vice president of global policy at the Software Alliance, a trade group. In countries like India, Indonesia, Russia and Vietnam, governments are introducing regulations to ostensibly protect their citizens’ privacy and build domestic internet industries that will stymie the ability of American companies to provide services in those countries.

It remains to be seen which country takes the lead and how rules around their data evolve. For now, both are throwing up roadblocks to thwart each other. For instance, Chinese rules prevent foreign companies from mapping the country, which could limit the ability of American companies to offer automated driving technology. American lawmakers and policymakers have tried to prevent China from monopolizing data-related infrastructure by barring Huawei and other Chinese telecom equipment firms from building any part of America’s next-generation telecom network.

In the trade talks, China has offered some concessions on rules governing the cloud computing industry, where foreign companies are required to operate in tandem with a Chinese partner. In a meeting in March, China’s premier, Li Keqiang, floated the idea of giving foreign cloud computing companies the ability to operate independently in a free-trade zone, as well as two of the roughly eight licenses that companies need to operate in China, people familiar with the negotiations say. In return, the Trump administration has pressed China to provide all the required licenses, and eliminate all ownership requirements without geographic restrictions.

The Chinese have also been willing to discuss setting a fairly high bar for which companies are deemed so vital to China’s information infrastructure that they have to keep vast amounts of data within China using government-approved telecommunications equipment. The Chinese government has discussed applying its most stringent rules to enterprises with a market share of at least 10 percent, said one person familiar with the discussions.

American negotiators have called on China for more openness on its data rules, but it is not one of the Trump administration’s top priorities, and China has given little ground, people familiar with the negotiations say. Even if China opens up to foreign cloud computing, continued restrictions on the flow of data from China will make these ventures less profitable. And companies say Chinese laws on critical data could be used to curtail their operations at any time.

Who is Amanda Benett and how she has colluded with the Communist Party of...

News editor - 05/05/2019
1
Amanda Bennett is an American journalist and author. She was named the 29th director of The Voice of America in 2016. Amanda has been soft with the Communist Party...

hong kong editor - 23/10/2019
0
Hong Kong’s government has officially withdrawn the controversial extradition bill which sparked over 20 weeks of protest and civil unrest. The move came a...

Breaking! Remarks by Vice President Pence on US policy about Communist China

A question of control: China’s Xi Jinping faces a rare rebuke at home

Society editor - 20/12/2017
0
China made “Xiconomics” the guiding principle for the world’s second-largest economy as it unveiled the first economic blueprint of President Xi Jinping’s second term. The...

Important! Trump will address the nation Sunday morning with a ‘major statement’ after cryptic...

Military editor - 28/03/2021
0
Chinese President Xi Jinping has instructed the armed police to intensify military training and combat readiness to enhance the capabilities to fulfill missions and...

Have the judges been nobbled?

human rights editor - 27/08/2017
0
Has the Hong Kong judiciary succumbed to political control? This question has been brought into sharp focus in the wake of the Appeal Court’s...

News editor - 06/05/2021
0
Xi plans to invade Taiwan to divert attention. Xi is all on his own. Capital keeps outflowing. The political situation inside CCP is very tense...

World editor - 22/07/2018
0
China is working around the globe to undermine American interests and supplant the United States as the world's leading superpower, a top CIA expert warned...

Chinese investors are worried about a crackdown on debt – should we be too?

Business editor - 18/07/2017
0
Investors should have been celebrating reports that China's economy continued to power along in the second quarter. Instead, they are worried that the country's...

For Chinese Pedestrians Glued to Their Phones, a Middle Path Emerges

Lifestyle editor - 09/06/2018
0
So ubiquitous in China are pedestrians glued to their cellphones, they have earned a nickname: the heads-down tribe. In their natural habitat, tribe members can...