Picture: The new headquarters of the People’s Daily newspaper during construction.

Outside China, architect Zhou Qi is best known for the People’s Daily headquarters, a Beijing tower that went viral in 2013 when social media users drew attention to its distinctly phallic appearance.

But the building’s notoriety does a disservice to its designer.

Not only did the 590-foot (180-meter) skyscraper go on to win an international award (the viral photographs had been taken during construction), it also distracts from a distinguished architectural career.

Zhou may design the occasional high-rise, but he spends most of his time restoring treasured pre-war buildings in his home city of Nanjing.

As rampant development unfolds across urban China, the country’s former capital has retained much of its old charm. Thousands of historic buildings still stand in Nanjing amid the steel and glass.

And over 100 of them owe their longevity to Zhou. From a disused church to a crumbling hotel, he has breathed new life into the city’s buildings, fighting to preserve the past in a country where heritage is often forfeited in the name of progress.

“This preservation work is so important,” Zhou told CNN at his office in Nanjing’s Southeast University, part of a magnificent Western-style campus dating back to 1902. “It means we can keep old buildings for our own use — and for the next generation. Through them you can see that the city is alive.”

The abundance of historic buildings in Nanjing — both Western and Chinese in style — results from the city’s unique past.

Most of the finest examples date back to Nanjing’s time as the country’s capital, before the Communists came to power in 1949, according Charles Musgrove, author of “China’s Contested Capital: Architecture, Ritual, and Response in Nanjing.”

“From 1927 to 1937 quite a few government buildings were constructed along the main artery of the city, Sun Yat-sen Boulevard,” he said over email. “Mostly, these buildings housed key ministries, particularly those that it was believed would help the government raise revenue for investment in infrastructure.”

The area is also home to banks, churches and mansions from this era. Zhou says that around 80% of the period’s noteworthy architecture remains, albeit in varying states of disrepair.

Just over a mile south of Zhou’s office stands the Dahua Cinema, a 1930s structure that once housed a movie theater and concert hall. When the architect’s team began renovating the building in 2008, it had been in disuse for almost 15 years.

Today, the cinema has been restored to its former glory — or something resembling it. The building’s Art Deco design has been revived with a grand foyer composed of striking red columns and golden embellishments. 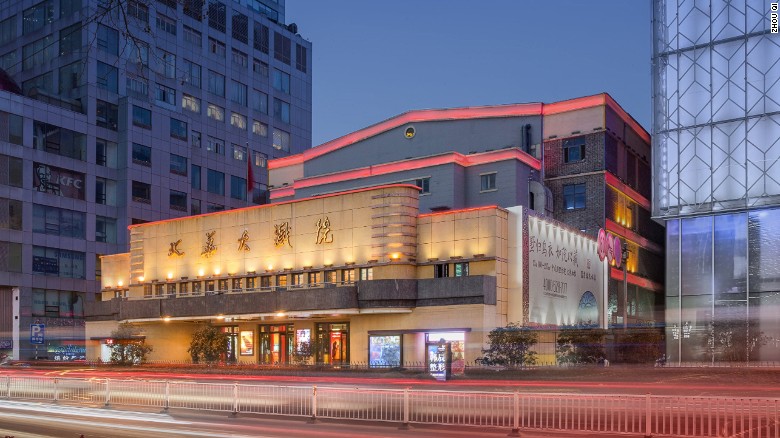 The Dahua Theater.
But Zhou describes restoration projects as exercises in compromise. Although he occasionally — and painstakingly — restores old buildings to their original form, he is normally tasked with preparing them for the 21st century.
At the Dahua Cinema, for instance, Zhou was forced to sacrifice much of the building’s interior to accommodate the trappings of a modern movie theater: cafes, popcorn vendors and multiple screening rooms.
“These projects have to meet the requirements of modern use,” he said. “We have make sure the building has another 100 years of life.
“It can be very controversial. Sometimes, if we make the interiors especially modern, people say that we shouldn’t have. But while historic buildings have to be preserved, they also have to offer new functions.”
Zhou’s pragmatic approach makes restoration more appealing to city authorities and private developers alike.
A modern cinema will generate more revenue than a faithfully restored monument to the past, offsetting the substantial cost of the work.
“Preserving these buildings can cost three times as much as it would to just destroy them and build new ones — it requires a lot of energy and money,” Zhou said, referring to an old British-built storage facility that he is transforming into a shopping mall.
One of his most extensive projects to date, Zhou must feed steel reinforcements into the structure’s dilapidated concrete frame before cosmetic work can begin.

It appears that government protection, not economic forces, has kept the bulldozers at bay. In the last two decades there has been a sea change in official attitudes, according to Musgrove, who is also an associate history professor at St. Mary’s College of Maryland.

“When I first lived in Nanjing back in 1996 (…) a lot of old buildings were being torn down,” he said. “And while the officials I talked to recognized the cultural value of the old architecture, they clearly wished they could work in one of the new ‘modern’ (government) buildings being built.”

(Now) Nanjing city officials seem to have woken up to the fact that these buildings provide a distinctive quality to the city that can be used to add a special cultural cachet (…) and to attract tourists.”

Across China, buildings with historical value are being offered national-, provincial-, city- and even district-level protection.

Published in 2010, the Nanjing government’s ten-year plan for protecting the city’s heritage pledges to “emphasize the revival of history and culture” while “strengthening the organic integration of various historical and cultural sites (with) modern city functions.”

These protections, which now safeguard hundreds of buildings in Nanjing, forbid property owners and developers from making certain alterations and have been designed to enhance “the vitality of the old city.” 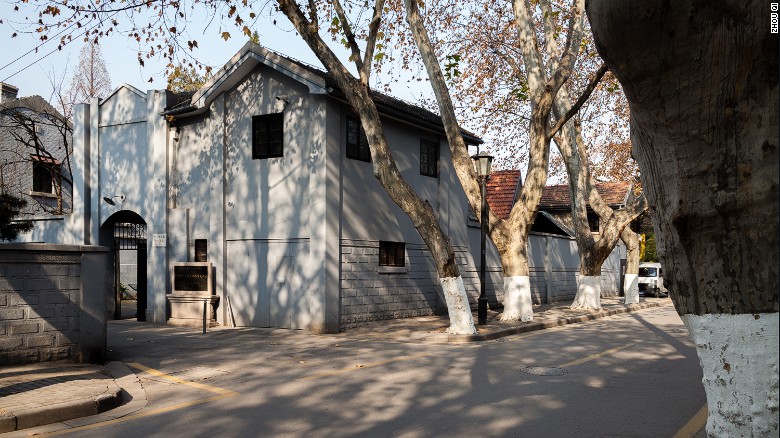 This can be considered progress in a country with a reputation for demolishing the past. In Beijing, for instance, large swathes of the old city were razed as part of Mao Zedong’s campaign to destroy what he called the “Four Olds” (old customs, old culture, old habits and old ideas).

“During the Cultural Revolution, people tried to destroy everything — like the Taliban,” Zhou observed.

As neither a political or commercial hub, Nanjing was afforded protection of sorts. Zhou also attributes old buildings’ survival to the city’s slow urban development when compared to nearby Shanghai, which accommodates more than three times the population.

But while old buildings remained, it was not until the late 1980s that Zhou perceived any official interest in protecting them. Despite providing little to no funding for restoration at that time, the city’s government helped him survey old government buildings — the first research of its kind in Nanjing.

By the time he returned from completing a Ph.D. in Chicago in 2003, public and private heritage projects were becoming commonplace. Now, Zhou’s team at Southeast University — which comprises architects, researchers and mature students — typically carries out five or six restorations at any one time.

“Over the last 20 years, the government has made real efforts to establish national laws, local laws and regulations so we can pursue this work,” he said, of his optimism for the city’s heritage preservation efforts. “It has just become common sense.”

China plane crash starts an era of people readily to kill one another for...

chinese society editor - 24/03/2022
0
The pilot has planned a suicide crash of his China Eastern plane months ago as a retaliation according to unnamed sources.

Chinese Entrepreneur Takes On the System, and Drops Out of Sight

human rights editor - 09/03/2019
0
For months, Zhao Faqi was a folk hero for entrepreneurs in China — an investor who fought the government in court and online, and...

Guo Wengui editor - 29/11/2020
0
In this US Presidential election, all the forces behind the scenes - They are all standing with the CCP, why? The reason very simple, they...

Society editor - 28/02/2017
0
Chinese authorities have held mass "anti-terror" rallies involving armed troops across the restive region of Xinjiang, in an apparent show of force. More than 10,000...

As U.S. and Chinese Teams Meet on Trade, One Side Has an Edge in...

Trade editor - 04/05/2018
0
China is struggling to find people in Washington who can provide insight into the Trump administration’s aggressive moves on trade. One senior American trade...

Business editor - 21/01/2017
0
With fears about the Trump presidency, rising debt levels and an unwinding property boom, the world’s No 2 economy is set for an uncertain...

Lifestyle editor - 06/09/2017
0
When she was a teenager, Gui Lisha routinely skipped classes to play video games at cyber cafés, to the point that her father threatened sending...

News editor - 10/09/2020
0
US Secretary of State Mike Pompeo has urged top diplomats from Southeast Asia to cut ties with Chinese companies helping build islands in the...

Business editor - 13/07/2017
0
Ofo, a Chinese company with plans to rewrite the global rules on bike sharing, got a $700 million cash infusion last week in another...

ZTE fined $1.1bn for flouting US sanctions against Iran

Tech editor - 08/03/2017
0
Chinese telecom giant ZTE has been fined $1.1bn and will plead guilty to charges that it violated US rules by shipping US-made equipment to...

Society editor - 19/08/2017
0
China has signalled that it intends to play a leading role in public health globally, announcing a slew of programmes yesterday in partnership with...