It’s a match made in business heaven: Chinese technology companies hungry for expansion are diving into the less-developed African continent, where several countries are targeting double-digit economic growth.

Iginio Gagliardone, a lecturer in media studies at the University of Witwatersrand in South Africa, told CNBC via telephone that the Middle Kingdom’s expansion into Africa has been particularly pronounced over the past four to five years.

“China is everywhere,” Gagliardone said, although he noted that the mainland’s presence was stronger in some markets.

For example, he noted China was “definitely the only player” in Ethiopia, with Chinese investment in the country’s technology sector totaling $3 billion as of 2012.

But he added that China was making its presence felt not just in East Africa generally, but also as far north as Egypt and Morocco and as far south as South Africa.

For Gagliardone, success in Africa boiled down to cost, with Chinese companies offering cheaper alternatives than their U.S. and European competitors. Gagliardone also said that African companies welcome the Chinese “no questions asked” style of doing business.

The China-Africa tech story began two decades ago, with the expansion of Chinese telecommunications giant ZTE, followed by Huawei, which provides similar services.

Others pointed to the innovation Chinese companies have brought to Africa.

In a report published in June, consulting firm McKinsey said that innovation has been key to the success of Chinese companies in Africa. ” 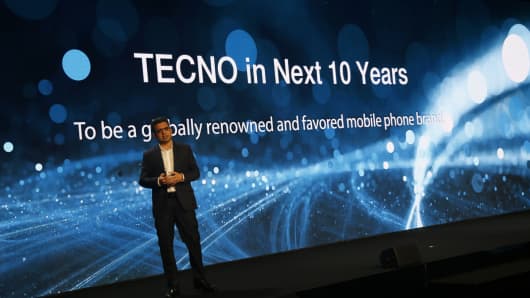 Tecno: Arif Chowdhury, Tecno and Transsion Holdings vice president, gives a presentation on the future of the brand.

Handsets from the company, which has a regional base in Nigeria, have practical innovations geared toward an African market.

Those included a long battery life as reliable power sources can be difficult to come by, screens resistant to dust particles and cameras specifically adapted for darker skin tones. On top of this local understanding is a market-friendly price: Handsets typically cost between $50-$100.

Tecno has grown fast, and according to Transsion Holdings’ website, its collective brands in Africa have a more than 40 percent market share in Sub-Saharan Africa, with a total sales volume of more than 246 million dual-SIM handsets, or phones which can hold two SIM cards.

According to CNBC Africa, Tecno itself has a 25 percent share of Africa’s total smartphone market.

They “adapt easily and come up with a product that everyone likes,” he said. 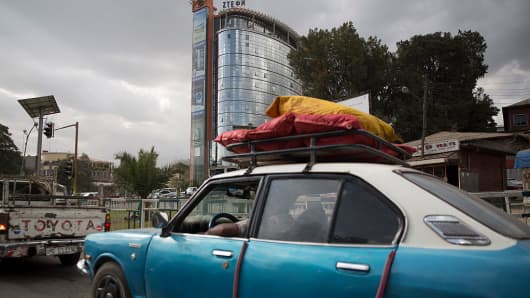 McKinsey’s report pointed to Chinese broadcaster StarTimes, which has employed a strategy of going in cheap and expanding later.

The company employs and trains locals while growing its viewership, and invests in both local and international programming, and it’s found particular success in Tanzania, the report said.

“This focus on the local market has taken television viewing from an occasional luxury to a daily routine for many Tanzanians,” McKinsey said, adding it allowed the company to capture business from Africa’s growing middle class.

China’s formalized One Belt, One Road infrastructure projects were also spurring mainland interest in the continent.

In December 2016, China Telecom Global announced it would work with the Djibouti Data Center to expand its network and spur the growth of fiber cable services in East Africa.

Liu Changhai, managing director of China Telecom Ltd. in Africa and the Middle East, said in a December statement that the decision “marks a new page for the company’s regional strategic planning.”