Alibaba Group’s digital payment arm Alipay is launching in South Africa as it moves to expand the service around the globe.

Alipay is working with tour bus operator City Sightseeing, via its partner ACI Worldwide and Peach Payments, to enable Chinese tourists in South Africa to pay for tours on the sightseeing buses using Alipay, according to a company announcement. City Sightseeing operates open-top ‘hop on-hop off’ bus tours in Cape Town and Johannesburg. It’s the first local merchant in Africa to support Alipay as it aims to capture more of the share of Chinese tourists that are increasingly visiting the country.

According to the companies, China is the largest outbound tourism market in the world with around 135 million people traveling outside of the country last year. Those looking for a adventure are setting their sights on Africa, with South Africa seeing a 96% increase in the number of Chinese tourists last year. Rita Lu, head of Alipay EMEA told CNBC that Alipay sees “big potential in Africa” noting the company is looking to expand in other areas around the world where there is a Chinese footprint. (See also: Analysys Finds Tencent Closing in on Alibaba’s AliPay.)

Alipay, which in April merged with Southeast Asian payment platform helloPay, has been in expansion mode for months now and has even set its sights on the U.S. where PayPal Holdings Inc. (PYPL) Apple Pay are the dominate players. Earlier last month, the digital payment company, which boasts 450 million global active users, announced that it is teaming up with Atlanta-based credit card processing service First Data Corp.(FDC) to enable Chinese tourists to use Alipay’s mobile wallets across about 4 million U.S. stores.

“Our goal is to extend reliable payment services to the over 4 million Chinese consumers who visit North America every year,” said Souheil Badran, president at Alipay North America when announcing the partnership. (See also: The Digital Wallet and the Future of Payments.)

Earlier this year, First Data and Alipay tested Alipay’s mobile payment service in a number of specialty retail locations in California and New York. Aside from making online payments and money transfers, Alipay customers can also use the company’s mobile app to hail a taxi, book a hotel, buy movie tickets and make doctor appointments. According to Juniper Research, more than 150 million people in the U.S. will make start making digital payments by the end of the year.

We note that Alibaba has had an impressive run on the bourse in the last one year. The company gained 73.9%, better than the Zacks Electronic – Commerce industry’s addition of 70.7%. 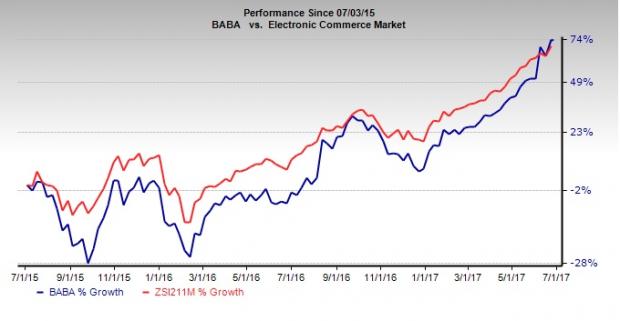 We expect international expansion to back the momentum going forward. Also, this outperformance can largely be attributed to the company’s near monopoly in the Chinese e-commerce market, growing cloud computing services and strengthening efforts to diversify its business beyond it.

Liu said, “We see big potential in Africa”. She added, “Alipay was actively looking for further areas of expansion across the world “where we see a Chinese footprint.” Liu said that 135 million travel internationally every year.

Alibaba appears to be smart enough to foresee that online payment companies could be a major beneficiary of this boom.

Alibaba Continues to Push Outside China

The move appears to be Alibaba’s latest gambit to strengthen its position outside China.  The company has been looking at international markets to expand its business. Its current strategy is to generate earnings through investment outside China where it’s up against well-established players like eBay and Amazon, which have been witnessing great success.

On the payment front, Alibaba is already facing tough competition from the likes of Tencent Holdings. Tencent’s WeChat Pay service recently tied up with mobile payment platform Citcon to make its service available to Chinese tourists who are in the U.S.

To fight off the competition and further expand its international footprint, Alibaba in March, pumped in $177 million for almost 36.3% stake in Paytm E-Commerce, India’s biggest mobile commerce platform. In April, Alibaba’s affiliate Ant Financial, merged with Singapore-based payments platform helloPay and also made a $1.2 billion bid for U.S. firm Moneygram.

As Alibaba focuses on international expansion, its efforts are directed worldwide, including South East Asia, Africa, Europe, Middle East and the U.S.

Given the increasing preference of customers for online shopping nowadays, the use of this online payment service has increased. Therefore, the expansion of Alipay to South Africa will extend its foothold in the mobile payment space.

KLA-Tencor delivered a positive earnings surprise of 11.55%, on average, in the last four quarters.

Applied Materials delivered a positive earnings surprise of 3.35%, on average, in the trailing four quarters.

Just released, today’s 220 Zacks Rank #5 Strong Sells demand urgent attention. If any are lurking in your portfolio or Watch List, they should be removed immediately. These sinister companies because many appear to be sound investments. However, from 1988 through 2016, stocks from our Strong Sell list have actually performed 6X worse than the S&P 500.