A forest fire in southwestern China turned deadly over the weekend when winds shifted unexpectedly, trapping firefighters and local officials in a maelstrom. The bodies of 30 people who could not escape were found on Monday, officials announced, even as the fire continued to burn out of control.

Among those who died were the chief of a regional forestry bureau in Liangshan Yi Autonomous Prefecture in Sichuan Province, and his deputy, state media reported. The officials had traveled to the scene of the fire, which broke out on Saturday in a remote location at altitudes nearing 13,000 feet, and had not been heard from since.

“A huge fireball was formed in an instant,” the Ministry of Emergency Management said in a statement announcing the deaths.

The death toll appeared to be the largest for firefighters in China since a devastating blaze at a chemical plant in Tianjin killed more than 100 in 2015.

Although forest fires are common in China in the spring, the government had issued fire warnings in recent days in Sichuan and several other regions experiencing high temperatures and drought.

The Chinese Meteorological Observatory warned that dry weather, strong winds and high temperatures would persist, and it urged people to exercise particular caution during the annual holiday of Qingming, known as Tomb Sweeping Day, which falls this coming Friday. Millions travel to their ancestral homes during the holiday. 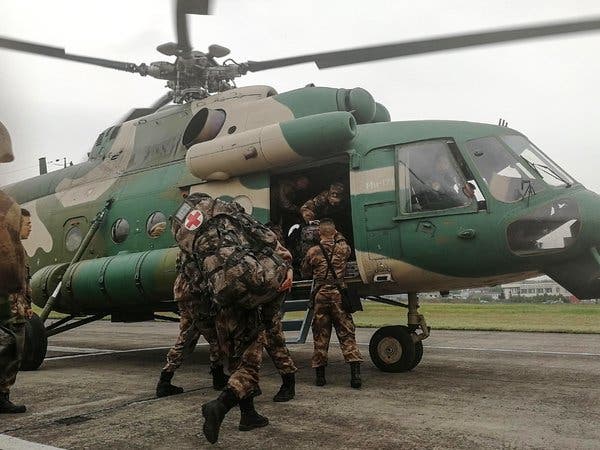 The warning cited heightened risks in the mountains north of Beijing, near parts of the Great Wall; in Shanxi Province in central China; and in Sichuan and neighboring Yunnan Province in the southwest.

“The forest fire risk level in some areas is extremely high,” The Paper, a digital news organization, said, citing the observatory.

The fire in Sichuan appeared to be the worst of several that broke out in the country in recent days. It was not the biggest — one in Shanxi appeared to have consumed a larger area — but it became the deadliest.

Nearly 700 firefighters from the Liangshan branch of the Sichuan Forest Fire Brigade have been fighting the blaze. On Sunday afternoon, the wind abruptly shifted the fire, catching dozens by surprise.

Of those reported killed, 27 were firefighters and three were local officials, according to reports in state media, which were limited and contradictory at times. There were no immediate reports about the cause of the fire, nor its size.

The tragedy could focus new attention on the training and equipment of China’s firefighters. The main service was transferred in 2018 from the People’s Armed Police to the Ministry of Emergency Management. Some firefighters viewed the reorganization as representing a potential loss of prestige and benefits.

A staff member of the Sichuan Provincial Fire Corps Combat Command Center, reached by telephone, said that firefighting teams organized by the local government usually recruited villagers. Another official said that local villagers were familiar with the terrain and conditions and received adequate training.

“The advancement of technology in recent years should have provided them with better safety guarantees than before,” the official China Daily wrote on Monday evening, referring to the latest fire and the deadly blaze in 2015. “But the two fires in Tianjin and Sichuan have exposed that there is still a long way for China to go to modernize its firefighting system.”

Society editor - 15/11/2017
0
THEY’RE known as The 50 Cent Party and the unofficial group is defining the way governments manipulate society via social media. CHINA’S army of keyboard...

Decoupling has become reality between China and the US

Business editor - 21/10/2019
0
Although Communist China is not willing to admit the fact of China and US decoupling amid the escalation of trade war and sanctions as...

Guo Wengui editor - 22/10/2019
0
According to a piece of reliable information, the CCP murdered 15-year-old student Ms. Chan Yin-Lam. After her death, the CCP processed her body before dumping...

Business editor - 19/03/2017
0
Apple Chief Executive Tim Cook expressed support for globalization and said China should continue to open its economy to foreign firms, while speaking at...

Who in the west are supporting the evil Communist dictatorship of China?

World editor - 22/02/2020
1
The big businesses, the big media, the big universities, the big organizations The Money Guys Chinese President Xi Jinping has written back to Bill Gates after...

China is showing its true nature in Hong Kong. The U.S. must not watch...

US china editor - 17/11/2020
0
President Donald Trump is preparing a human rights and trade crackdown on China in the next two months in a bid to force President-elect...

News editor - 05/03/2019
0
“Public opinion from the minds of the people makes up the highest politics, and a general consensus is the motive for struggles and advancement”,...

China is leading the world’s economy with fake GDP numbers

Communist government of China behind the refinery attacks in Saudi Arabia

News editor - 16/09/2019
0
The communist government of China has been hinted as the “culprit” behind the drone attacks at refinery facilities in the oil-rich country of Saudi...

World editor - 07/08/2017
0
Manila: A US push to further isolate North Korea appeared to be reaping some dividends on Sunday as China, Pyongyang's major benefactor, urged its outcast neighbour...

human rights editor - 12/04/2017
0
Outrage has erupted on Chinese and Vietnamese social media over the removal of a passenger from an overbooked United Airlines flight. Videos posted online showed...

Social media editor - 18/09/2017
0
Setting up a Twitter account may seem a fairly obvious thing for a political party to do, but the step has not so far...

Society editor - 31/07/2017
0
For decades, China has sought to expand its "soft power," or the ability to extend influence through non-military means. It spends some $10 billion...