In a city as packed as Hong Kong, what’s private elsewhere becomes public — like conversations about politics. In the shade of a tree, a middle-aged man in a park tells me he likes China’s government and he’s not worried about its impact on his city.

Old women sitting on a nearby bench overhear him and shake their heads in unison until one of them stands up.

“Tell the truth!” one of the women yells.

She and the man exchange a few choice words and then he gets up and storms off to find another bench.

Twenty years after Hong Kong, a city of more than 7 million people, was handed back to China by Great Britain, conversations about the mainland’s impact can still be fraught.

“Some people don’t have a brain to think!” exclaims Anita Wong, a 65-year-old retired accountant. “People who are educated and can think for themselves aren’t happy with China.”

Wong, who used to work at an international school in Hong Kong, says China’s government detains anyone who criticizes it and is trying to control the minds of the city’s youngest residents by changing school curricula. She says the situation is so bad that even C.Y. Leung, the city’s outgoing chief executive, opted to send his own child away. 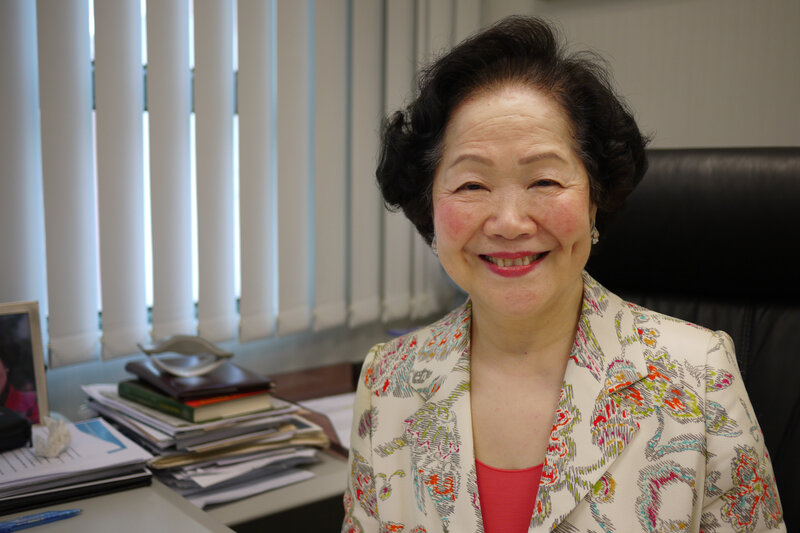 Anson Chan, who oversaw the 1997 handover of Hong Kong to China as the city’s chief secretary, says China has broken the promise it made 20 years ago to allow Hong Kong a degree of autonomy.

“His daughter went to my school until the second grade, when he sent her to England,” she says. “Everyone who can afford to escape the Chinese system is doing just that.”

And that’s what Anson Chan wants the rest of the world to understand. She oversaw the 1997 handover as the city’s chief secretary.

Chan says China has broken the promise it made 20 years ago to allow Hong Kong a degree of autonomy and for the people of the city to vote directly for their chief executive. Instead, China has tightened its political grip over the city, spurring violent protests.

Chan says the U.S., the European Union and anyone else who deals with China on an international stage should study how Beijing has treated Hong Kong as a cautionary tale. “You’re not just talking about the 7.3 million people living in the 1,000 square kilometers called Hong Kong,” says Chan.

“What sort of a China would the rest of the world want to deal with?” she says. “A China that is increasingly autocratic, that takes increasingly repressive measures on its own people? Or a China that moves progressively towards greater political liberalization, embracing a rule based on order and embracing also of universal values?”

Emily Shi, a 27-year-old flight attendant, says Chinese control over the city has meant more pressure for her and her family. She was born and raised in the city, but can no longer afford to live in the neighborhood where she grew up.

“There are more mainland Chinese emigrating here. They’re pushing the housing prices up, and I can’t buy a place to live,” she says. “My husband and I are putting off having children because we don’t have the space.”

This is becoming a more common complaint here. Income inequality is at its highest in 40 years, according to government figures.

But not everyone here thinks the Chinese are so bad. A retired woman who would only tell me her last name, Wong, so she could talk freely about politics, relaxes in the only place where there’s room for a park — the median of a road.

“The government is good,” she says. “Thanks to them, I have my welfare checks. The people who criticize China aren’t seeing the good things they do. Life in China has gotten so much better and happier.”

Wong says she loves China. I ask her if she has ever considered moving there.

The rumoured detention of a Chinese exec with Kushner ties could mean upheaval for...

Donald Trump may lose the election because he has not made himself a war-time...

US china editor - 05/11/2020
0
In a bit of an embarrassment, US President Donald Trump has declared himself the winner of the presidential election at 2:00 am November 4th,...

World editor - 03/01/2021
0
The Chinese Communist Party’s vaccination: a new political movement Although the CCP has not officially announced the vaccination target, the government has stated that it...

World editor - 26/01/2018
0
Australia's spy agencies were so concerned about the security and strategic risks posed by a plan for Chinese firm Huawei to build an internet...

corruption editor - 19/05/2017
0
Chinese billionaire Guo Wengui, who has suspected ties to China’s intelligence apparatus and is currently living in New York, began releasing allegations of corruption and division among top...

How This U.S. Tech Giant Is Backing China’s Tech Ambitions

Tech editor - 07/08/2017
0
Qualcomm is providing money, expertise and engineering for Beijing's master plan to create its own technology superpowers, the Times reports. The company is...

US china editor - 21/05/2020
0
Latest tweets of US President Donald Trump on China: Remarks by President Trump Before Marine One Departure (May 21) Q    The Chinese Parliament is poised to...

Politics editor - 15/03/2017
0
China has been trying and failing for years to get its people, especially its young people, to care about its political system. Could it...

John Howard warns China could use its expats to grow influence in Australia and...

World editor - 27/06/2018
0
China could use its 1 million expats in Australia to help grow its influence and power in the region, former prime minister John Howard...

China concludes its CPPCC sessions with the greatest dictator caring about the toilets of...

Politics editor - 15/10/2017
0
This week Chinese President Xi Jinping will lay out his vision for the China Dream in his state of the union address at the...

Uncategorized editor - 20/06/2017
0
China’s fourth attempt at cracking into MSCI Inc.’s benchmark share indexes comes with its best chance of success -- and the least at stake. In...

China built the world’s largest telescope, but has no one to run it

Tech editor - 07/08/2017
0
"Most astronomers in the United States do not like to work abroad." During the second season of The Big Bang Theory, the aspiring actress Penny borrows money from...